Biden spoke at an Equal Pay Day summit at the White House on March 24.

"It’s really amazing," Rapinoe said ahead of the meeting. "Both of us feel honored to even be invited and continue the fight that we’ve had for a long time."

At Wednesday’s meeting, Biden made remarks citing the administration’s effort to close the gender and racial wage gap in the fight for equal pay.

"The pay gap is real, and this team is living proof that you can be the very best at what you do and still have to fight for equal pay," Biden said.

Players, led by Alex Morgan, claimed they were not equally paid under their collective bargaining agreement to what the men’s national team receives.

Biden urged congress to pass the Paycheck Fairness Act, which is part of an effort to address the gender pay gap in the United States by holding companies accountable for pay disparities.

"Equal pay makes all of us stronger," Biden said. "If we’re able to do this, it will be transformational for our nation," Biden said.

Dr. Jill Biden pointed to her former work experience as a teacher making only 75% of what her male co-worker made, despite having the same skills, hours and experience. 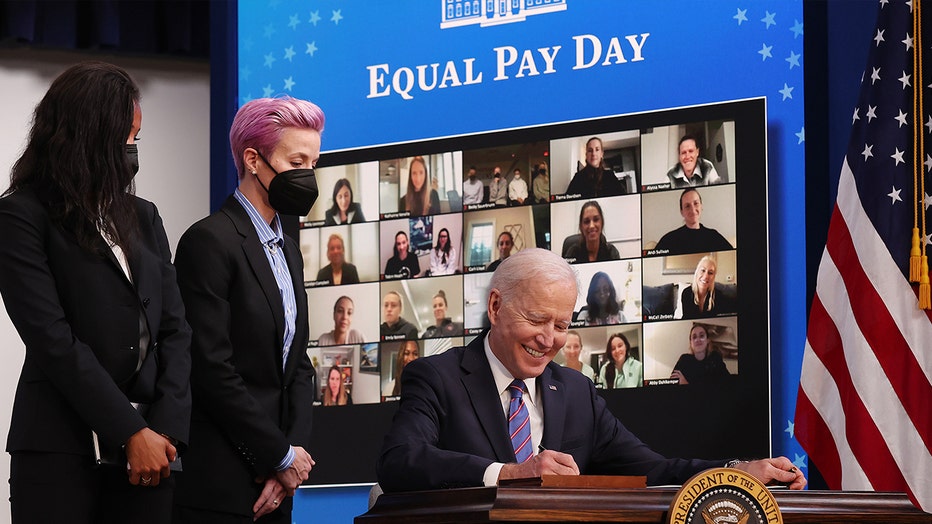 "Today all these years later, there are women who are still in the exact same position. This is personal to me, because it’s personal to all women," Biden said. "Equal work deserves equal pay no matter who does it," the first lady said.

"Despite all the wins, I’m still paid less than men who do the same job that I do," Rapinoe said. "Despite those wins, I’ve been de-valued, I’ve been disrespected and dismissed, because I am a woman.

Rapinoe continued to carry the cause Wednesday when she testified before Congress in honor of Equal Pay Day. She was questioned on the team’s pending equal pay lawsuit.

"Yes, we’re fighting for ourselves and yes, we have our outstanding lawsuit with the federation, but we’re with everyone. We’re with so many women across the country. We’re with so many women who aren’t able to be in this committee hearing, who aren’t able to get the ear of the media, who do not have the bright lights and cameras on them all the time. We are looking to carry this torch for so many other women," Rapinoe said.

Rapinoe and the national team players have been embroiled in a contentious discrimination lawsuit over equal pay with U.S. Soccer. The national team settled its dispute with the federation over unequal working conditions in December, leaving the pay dispute still unresolved.

"We’ve been in this equal pay fight long before our current lawsuit was filed. We tried to go the EEOC (Equal Employment Opportunity Commission) route, we tried to negotiate and time and time again we were told just simply no, the only thing that was going to be available was less and far less, to be honest," Rapinoe said. "So this was the next step we had to take, frankly. I don’t think anyone wants to go into litigation willingly; it’s not a fun thing. But we felt like for our team and future of our sport, this is what we had to do."

According to EqualPayDay.org, full-time female workers in the U.S. still make 82 cents a year for every dollar paid to men.

The National Women's Law Center found that Black women earn just 63 cents for a dollar paid to a non-Hispanic white man, while Hispanic women make only 55 cents. That difference translates into a loss of roughly $1 million in income over a lifetime, the Associated Press reported.

"These aren’t simply women’s issues," Cecilia Rouse, chair of the White House Council of Economic Advisers, said at Wednesday's press briefing. "They affect all families, the ability of our economy to recover, and our nation’s competitiveness."

According to Reuters, the coronavirus pandemic has only exacerbated disparities, triggering what Vice President Kamala Harris has called a "national emergency" for women.Biden’s $1.9 trillion coronavirus relief package includes provisions for women, aimed at helping females get back to work amid the COVID-19 pandemic.