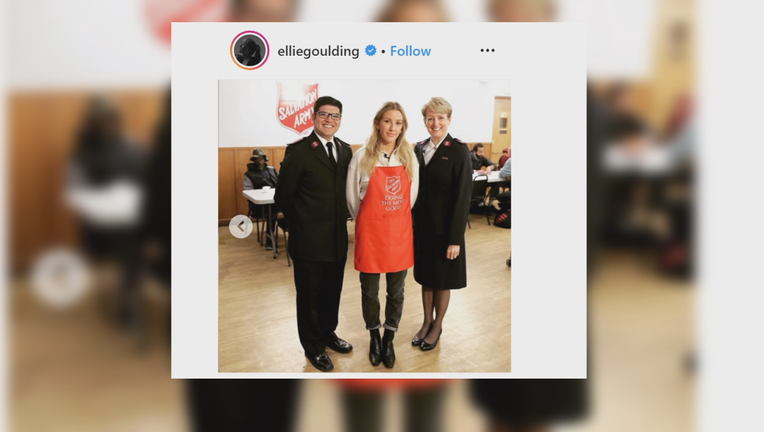 Within a few days of being announced as the halftime performer at the Dallas Cowboys Thanksgiving Day game, Ellie Goulding threatened to step aside after she said fans brought up anti-LGBTQ claims surrounding the Salvation Army. However, the charity says the show will go on.

The Salvation Army released a statement Wednesday evening confirming that Goulding would be performing at halftime of the Cowboys Thanksgiving Day game.

The decision to stop the show was more than a moral dilemma for the British star, it was also a legal one.

Goulding can dazzle and dominate the stage, and lately, social media.

But after a flood of criticism on Instagram, she threatened to drop out of the halftime performance for the Dallas Cowboys Thanksgiving Day game.

After Goulding posted about volunteering with The Salvation Army, her fans lashed out at her, claiming the charity is anti-LGBTQ.

Goulding followed up with a threat to back out unless The Salvation Army makes a “committed pledge or donation” to the LGBTQ community.

"My opinion is that no one wins if she pulls out,” Howard said. “Most people will be shocked that The Salvation Army is being accused of anything negative."

Howard believes most people associate the charity with bell-ringing volunteers who collect donations for the less fortunate, and that could have been affected.

"People are, all of a sudden, going to ask what are these allegations about?” Howard added.

In its defense, The Salvation Army responded: "With an organization of our size and history, myths can perpetuate," adding that, "an individual’s sexual or gender identity, religion, or lifestyle has no bearing on our willingness to provide service.”

Howard believes the Dallas Cowboys also could be criticized.

"The Cowboys could be criticized for, why didn't you take a closer look at this? Why didn't you have a backup group?" Howard said.

Howard said the pop star canceling the performance could have been a breach of contract.

"What she has to consider is, is the favorability she would get from certain groups worth the amount of money she's going to have to pay?" Howard added.

The Salvation Army released a statement that Goulding's Thanksgiving performance will go on as planned. Read the full statement below:

"We’d like to thank Ellie Goulding and her fans for shedding light on misconceptions and encouraging others to learn the truth about The Salvation Army’s mission to serve all, without discrimination. We applaud her for taking the time to learn about the services we provide to the LGBTQ community. Regardless of race, ethnicity, sexual orientation or gender identity, we’re committed to serving anyone in need. Every day, we provide services such as shelter for the transgender community and resources for homeless youth – 40 percent of whom identify as gay or transgender. Ellie’s performance in the 23rd annual Salvation Army Red Kettle Kickoff during the Dallas Cowboys game Thanksgiving Day on CBS will kick off a season of giving that helps support these and many other programs and services throughout the country."

As of Wednesday night, reps for Goulding have not yet issued a statement about the performance.