BLACKSBURG, Va. - An 8-year-old therapy dog named Moose was among the graduates at this year’s virtual commencement ceremony at Virginia Tech — and this good boy has a lot to celebrate.

Moose, who came to Virginia Tech in 2014, received an honorary doctorate in veterinary medicine on Friday, the university said. He is one of four dogs who work at the school’s Cook Counseling Center, serving as working therapy animals and ambassadors for mental health awareness.

The Labrador retriever has aided in more than 7,500 counseling sessions and over 500 outreach events in his six years at Virginia Tech, according to his owner Trent Davis, the coordinator of animal-assisted therapy and a counselor at the center. 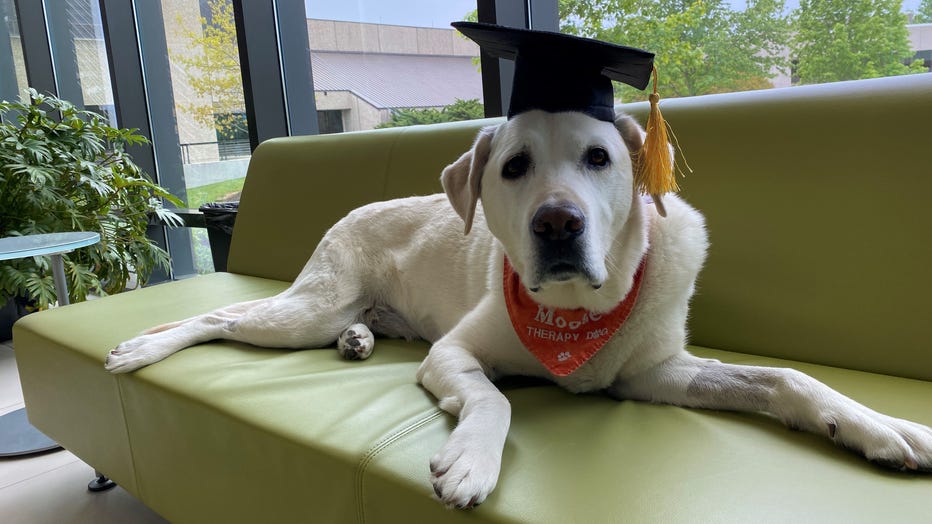 Moose, an 8-year-old Labrador retriever, is pictured wearing his cap after receiving an honorary doctorate degree from Virginia Tech. The therapy dog has been undergoing cancer treatment and is said to be doing well. (Photo credit: Virginia Tech / Pr

Recently, Moose has faced a challenging few months after he was diagnosed with prostate cancer just a week after his birthday in February.

The pup began radiation, chemotherapy and other therapies at the Virginia-Maryland College of Veterinary Medicine, a joint venture of Virginia Tech and the University of Maryland at College Park.

Moose continues to receive chemotherapy and has been given a “pawsitive” prognosis, the school said.

He has since has returned to work with canine colleagues Derek, Carson and Wagner, whose humans are all staff members at the counseling center, helping to reduce the stigma often associated with mental illness.

In 2019, the fluffy pup was honored with the Virginia Veterinary Medical Association’s Animal Hero Award, an honor given to an animal that has performed “a heroic act of service or provides daily outstanding service for humans.”

When Moose isn’t working, he enjoys swimming, playing a classic game of tug of war, and most of all, eating.