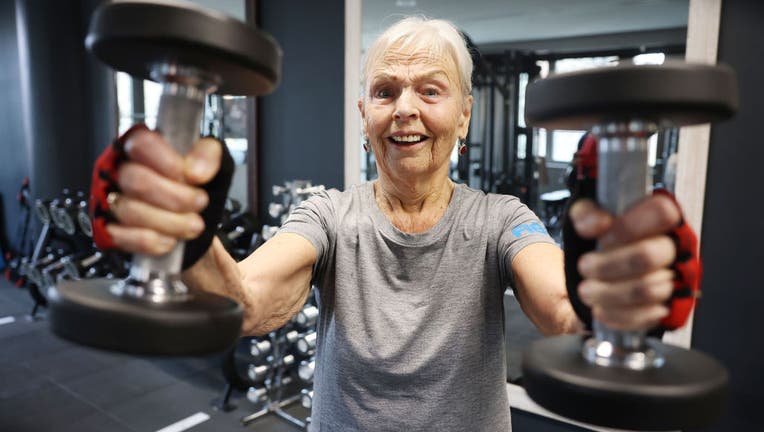 05 April 2022, North Rhine-Westphalia, Cologne: Model Elke lifts weights at the Holmes Place gym. The Fibo fitness trade show will be held in Cologne from April 7 to 10, 2022. (to dpa "The situation of German fitness studios against the backdrop of t

A new study suggests taking vitamin D, omega-3 fatty acids and committing to a simple exercise regimen could reduce the risk of cancer in active adults 70 years old or older.

Researchers in Switzerland published their study in Frontiers in Aging on April 25.

The group studied more than 2,100 people from seven European countries. The mean age of the participants was 74.9 years and 61.7% were women. The group was first asked to limit their vitamin D and omega-3 intake. They were then separated into eight groups and given various doses and combinations of vitamin D, omega-3 and a controlled exercise program.

Researchers then assessed the cancer risk for the participants every three months for three years. Results showed that among the participants, only 81 cancer cases were diagnosed and verified.

Wesley Culver, 17, spoke with FOX Television Stations about how his bout with cancer helped him discover his artistic side.

Researchers said the health risk for cancer was very low among the participants who took vitamin D, omega-3 and exercised. The risk was a bit higher for those who were assigned to two out of the three steps.

"We saw a cancer risk reduction when all three interventions were combined," the study’s authors noted.

The study did have its limitations. Researchers said the number of participants may be considered small. They also pointed out that three years may be too short when talking about cancer prevention.

Other scientists have encouraged a healthier lifestyle to reduce cancer risk.

In a recent interview with Fox News Digital, California-based nutritionist and health expert Susan Smith Jones, PhD, shared a few pointers about which foods to add to our diets for the highest chance of dodging cancer such as sprouts and all types of greens

According to the U.S. Centers for Disease Control and Prevention, more than two-thirds of all new cancers are diagnosed among adults aged 60 years and older.

The agency said in 2018, more than 1.7 million people were diagnosed with cancer. However, without more cancer prevention efforts that number is expected to reach more than 2.2 million by 2050, with the largest percentage increase among adults who are 75 years old or older.