It's also not the first time a vehicle has driven into the building, but owner James White says this time was different.

AUSTIN, Texas - Thieves drove a truck into the iconic Broken Spoke dance hall in South Austin Tuesday morning to steal an ATM and the whole incident was caught on camera.

Around 5:40 a.m., a group of young men wearing hoodies rammed a truck into the Broken Spoke. "Evidently that didn't do it cause they must have turned the truck around and they hit it the front end," owner James White said. "And then they backed out and load it up and stuff." 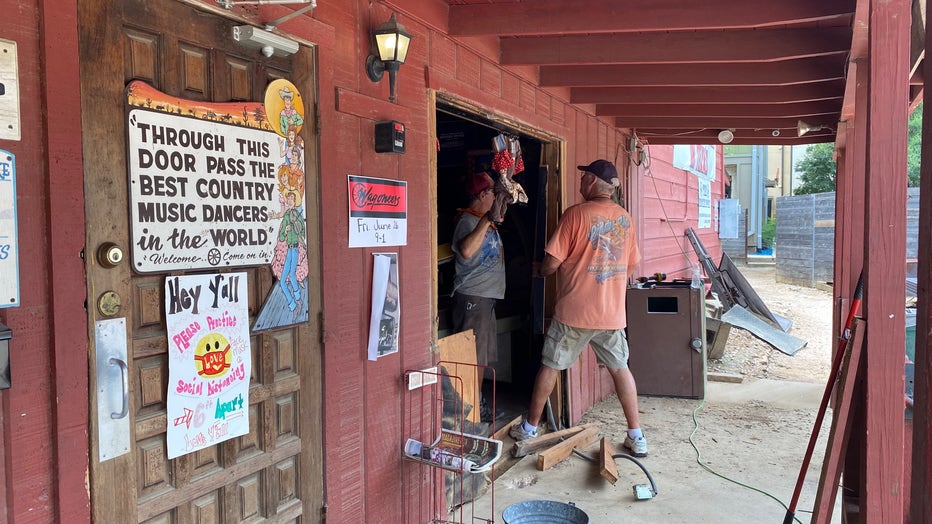 The thieves made off with the ATM leaving behind a sea of broken glass.

The support was immediate, with more than a dozen people coming out to help with repair and many more offering their assistance. "I've been getting phone calls from people all over, and a lot of them are musicians, and a lot of them are not really what you call construction workers, but they wanna pitch in to help rebuild the Broken Spoke," White said.

It's not the first time the dance hall has been burglarized. Two decades ago, thieves broke out the front window, climbed in and stole White's prized silver saddle. After a 14-day undercover operation, he got it back.

It's also not the first time a vehicle has driven into the building, but White says this time was different. "But it's kind of like they're kind of kicking me when I'm down, you know because we just had all this close up by the mayor and by the governor," White said.

The Broken Spoke has been a staple of the Austin honky-tonk scene since it opened in 1964 and was featured on the cover of country music legend George Strait's album "Honky Tonk Time Machine."