Several hundred students skipped school and marched on the Texas Capitol as a part of a global strike about climate change.

One group left Austin High School shortly after the morning bell. Others drove in from local private schools, like a group of elementary school kids at the south gate of the capitol. The students included the son of Richard Jones. "You can only learn by truly engaging in things,” said Jones.

The class, according to Jones, has been studying about the fires in the Amazon. Because of that, the kids were allowed to vote on whether or not to take part in the protest. “This is classroom time, what's important is that you actually learn stuff, there's lots of people who have school knowledge, and it doesn't translate into the real world, this is kind of like getting in the real world and interacting with it,” said Jones. 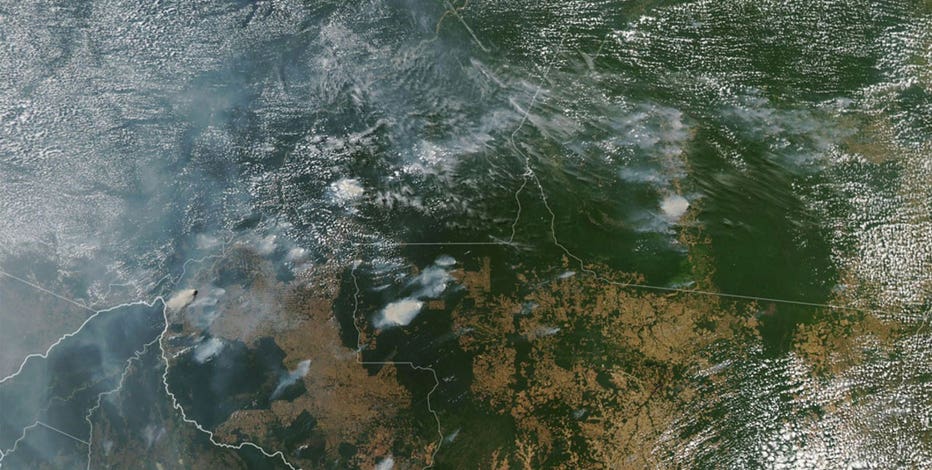 Amazon wildfires can be seen from space, NASA images show

The rampant wildfires spreading across the Amazon can be seen from space, according to new images from NASA.

Emma Galbraith was the lead organizer for the Austin strike. "And I’m on strike because I will not let my government and the corporations it lies in bed with threaten what I love,” said Galbraith.

FOX 7 Austin contacted several school districts in the Austin area. We were told students who take part in this strike will be listed as an unexcused absence. Ruby Tellez Sanchez was willing to take the chance and went to the rally instead of school. "What we are doing here right now is way more of an education than that we could have got in a science class,” said Tellez Sanchez.

Isabella Frich Macias joined her classmate on the trip to Austin. "Climate change does affect our education, and its irreversible, soon there's going to be things were we can’t go to school some days because of the weather, in the future,” said Frich Macias.

Those attending brought different signs and banners to the rally.

Some took political jabs, others had warnings of doom.

Lauren Savage and her classmates from the Girls’ School of Austin put their signs together Friday morning.

"And we want everyone, to show that little girls know about this and think it’s important for our world,” said Savage.

All the banners essentially made the same demand; the elimination of fossil fuels. "We are not doing this just to skip school,” said Hashawn Galib.

Galib and his classmates from the Austin Peace Academy chanted, “No more tar, no more oil, keep your carbon in the soil."

Their message was loud and directed to the state capitol. Few lawmakers were there Friday, but Galib was confident their voices would be heard. "I think they are going to listen today yeah. I feel like we got this, we got this, and I feel like today is the day, we got this in the bag,” said Galib.

Some of the specific demands made today by the group include wanting a state environmental emergency declaration from the governor, shutting down the coal fired power plant near la grange, and having the City of Austin to divest itself from all fossil fuels by 2030.

Many of the strikers are not old enough to vote.

But if the world survives, they promised their voices will eventually be heard at the ballot box.