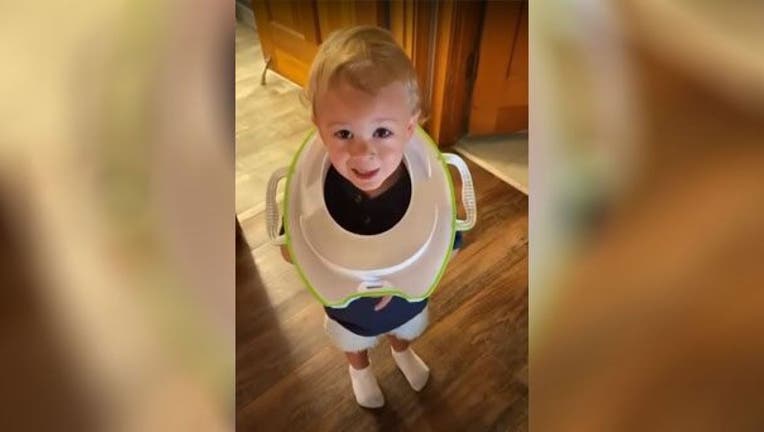 Abbie Paull said she only took her eyes off her son, Reuben, for a few seconds when he somehow got his training toilet stuck around his neck. (SWNS)

A Florida family found themselves in an unusual situation when their 2-year-old son got his training toilet stuck around his neck. The family filmed the removal process, which required a saw and apparently a toddler who is amazingly good at standing still for his age.

Abbie Paull said she only took her eyes off her son, Reuben, for a few seconds when he somehow got his training toilet stuck around his neck, The New York Post reports. In the footage filmed by Abbie, she asks her son how it happened, but unfortunately, he doesn’t appear to respond with anything but giggles.

In the footage, Reuben’s father can be heard asking if the seat is clean, to which the mom thankfully responds yes.

Apparently unable to simply remove the seat, the dad grabbed a saw and started cutting (with the blade pointed away from Reuben’s face). While Reuben had some trouble looking up and away from the saw, his father was able to cut the seat apart and free Reuben without any injury.

Hopefully, Reuben learned his lesson and doesn’t do whatever it was that he was doing to get his head stuck in the toilet.

Related: Polk deputy responds to call about alligator in shed, realizes it was a pool float

The newly designed restrooms are built with opaque walls so that, when the bathroom is empty, people can see inside. They’re also designed so that when someone locks the door from the inside, the walls turn solid, allowing the user to do their business in private.

The design was created so that users can see that the bathroom is both empty and clean before entering.