A woman whose racist attack on an Asian American woman in a Torrance park became a viral video now faces jail time, but for a different attack.

TORRANCE, Calif. - A woman who was captured on video making a pair of racist rants aimed at Asian Americans at a Torrance park in June pleaded no contest on Tuesday to a misdemeanor battery charge stemming from an attack on a woman at a South Bay shopping center. 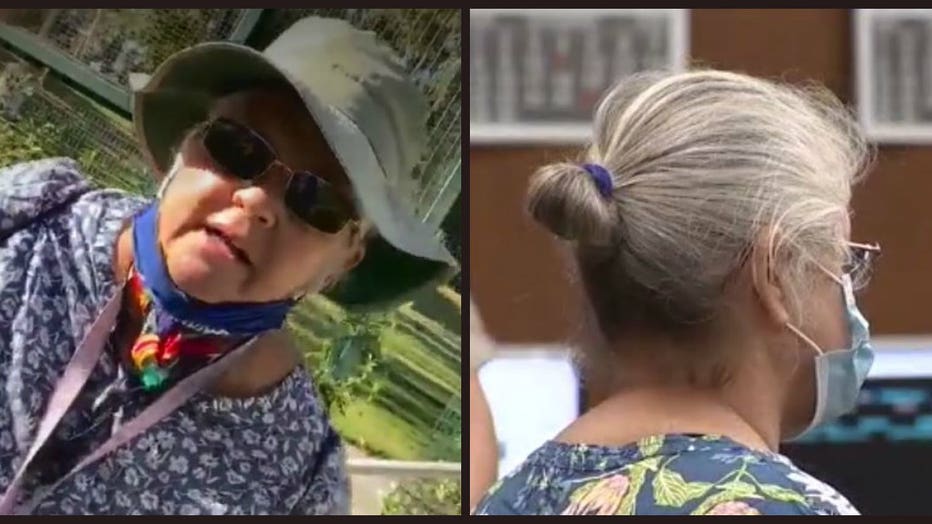 Lena Hernandez, 54, was sentenced to 47 days in jail, 52 anger management counseling sessions and three years on probation, during which time she must stay away from Del Amo Mall in Torrance, according to Torrance City Attorney Patrick Sullivan.

She is set to surrender Nov. 10 to begin serving her sentence, court officials said.

• Woman who went on racist rant at Torrance park identified; victims speak out

Hernandez -- identified by prosecutors as a retired social worker from Long Beach -- was charged with the battery count for physically attacking a bystander who tried to intervene as Hernandez was verbally confronting a custodian at the mall last Oct. 11.

In a statement in court, Kayceelyn Salminao said Hernandez "shoved me to the ground" and that she tried to stand her ground.   "... She grabbed my hair, pushed my head towards the ground and punched me multiple times in the head," she told the judge, adding that she feared seeing Hernandez out in the community for months afterward.

Hernandez was charged July 2 with a misdemeanor battery, arrested the next day by Torrance police and released from jail a few hours later.

She was the subject of two viral videos taken June 10 which showed her going on racist rants against Asian Americans in Wilson Park on Crenshaw Boulevard.

The Torrance City Attorney's office determined in July that there was "insufficient evidence to support filing any criminal charges against Ms.Hernandez" in connection with those incidents.

The City Attorney's Office said then that there were "critical gaps in the evidence regarding how each incident unfolded that result in the lack of necessary certainty required to initiate criminal prosecution against any suspect."

In the first incident, Hernandez was caught on video confronting a young woman exercising at Wilson Park.   "Go back to whatever (expletive) Asian country you belong in," Hernandez yelled. "This is not your place. This is not your home. We do not want you here."

An Asian man posted a video online showing him and his son being confronted by Hernandez on the same day.

"You need to go home," Hernandez tells the man as she walks up and stands so close that her image fills his phone screen. "I don't care about your Facebook or your video. Do you know how many people can't stand you being here? You play games, we don't play games."

After telling him he had parked his car too close to hers, Hernandezmockingly called him a "Chinaman."

The videos prompted hundreds of people to gather on June 12 at WilsonPark to protest the racist behavior, and city officials held a news conference to identify Hernandez and ask for the public's help to locate her.

"Our hope is that the members of our community will never have to endure such treatment," Torrance Police Department Chief Eve Berg said then.

The Torrance City Attorney's office said it could not be swayed by public sentiment.

"It is a prosecutor's solemn duty to analyze a case based on the evidence and trialability and not based on politics or public sentiment unrelated to the likelihood of prevailing before a jury," according to the statement released by the city attorney's office in July.