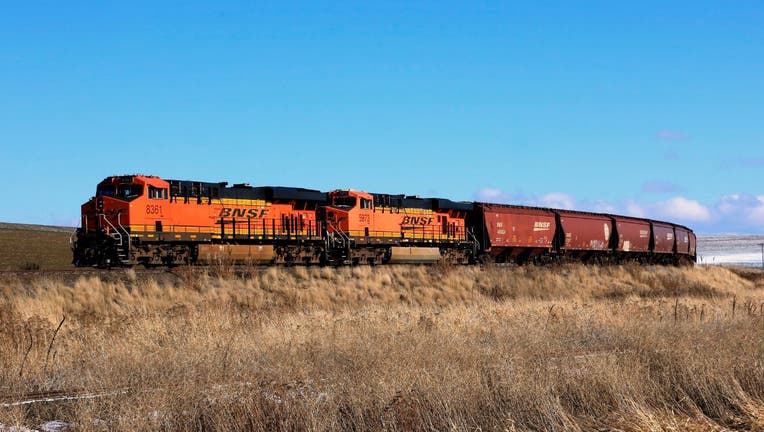 (FOX 9) - A man is facing felony charges for allegedly attacking a train engineer with a knife, causing the victim to flee by jumping from a moving locomotive Tuesday near Sauk Rapids, Minnesota.

Samuel David Hohman, 40, is charged with second-degree assault (assault with a deadly weapon) and criminal damage to property in the Sept. 20 attack, according to a criminal complaint filed by the Benton County Attorney's Office.

How prosecutors say the attack happened

Police said the train engineer was operating a BNSF engine pulling a rock train out of St. Cloud on Tuesday. The engineer told investigators a man with a buzz-style haircut and a dark hooded sweatshirt, later identified as Hohman, jumped on board and wrapped his arms around his neck, charges said.

Hoffman then told the engineer to "speed up and get out of town," the complaint alleges.

The engineer said Hohman then reached into his bag and pulled out a knife — a black plastic folding knife with a 2.5-inch dully and rusty blade — and started to attack him. A struggle ensued, and Hohman stabbed the engineer in the forehead, causing blood to run down his face, according to the complaint.

The engineer then bit Hohman's hand, pushed him away and jumped off the train near Sauk Rapids, the complaint says.

The train eventually came to a stop behind a church in Sartell. Officers saw a man matching the suspect's description, arrested him and identified him as Hohman, charges said. Officers noted he had dried blood on his pants and a jagged, bloody wound on one of his hands.

Hohman allegedly made comments about "smashing the inside of the train," charges said. Investigators determined several wires inside the train cab had been cut, causing several thousand dollars worth of damage. The cab area showed signs of struggle, with items "strewn about" and blood stains throughout.

Investigators also recovered the knife they believe was used in the attack about 75 feet from where police apprehended Hohman, the complaint says.

Hohman has a lengthy criminal history, with multiple convictions related to drug possession, as well as others for disorderly conduct, fighting, driving under the influence of alcohol and violating the terms of a restraining order.

His bail hearing is scheduled for Wednesday morning.