A female deputy wounded in an ambush shooting in Compton received a call from President Donald Trump last week as she was recovering in the hospital.

LOS ANGELES - The two deputies injured during an ambush shooting in California on Sept. 12, received a call from President Donald Trump last week as they were recovering in the hospital, according to authorities.

The deputies, a 31-year-old mother, and a 24-year-old man, were in their marked patrol vehicle outside a Metro train station in Compton on Sept. 12, when police said a suspect approached the passenger-side window, shot them multiple times, and ran from the scene around 7 p.m.

"This week #potus45 @realdonaldtrump called both of our deputies to check on their spirits, wish them a speedy recovery and remind them that the #american people are behind them and that the coward that harmed them will be brought to #justice!!" according to a Facebook post by the LASD Transit Services Bureau on Saturday. 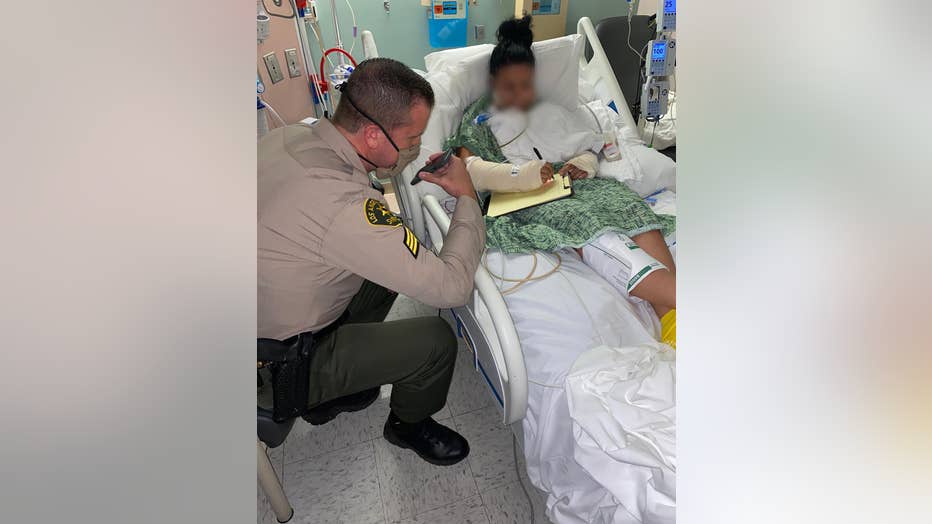 Due to her injuries, the deputy could only write down her response, which was relayed to Trump by an LASD Sergeant. (LASD Transit Services Bureau)

Photos captured the moment that the female deputy -- who is a mother of a six-year-old boy, received a call from the president. She was in critical but stable condition after being shot in the jaw and arms, reports said.

Due to her injuries, she could only write down her response, which was relayed to Trump by an LASD sergeant, who sat next to the deputy and her husband in the ICU.

"Both of the deputies and their families were very appreciative of the call!" the LASD wrote.

Sheriff Alex Villanueva said the 24-year-old old male deputy had been released from the hospital on Wednesday but had a "long road to recovery."

"The outpouring of love and support from our Department, @lacosheriff, the community, and indeed from around the world, has been overwhelming, but also very much appreciated!" the LASD wrote. "Please continue to keep these #lawenforcement professionals in your prayers and know that they will be back, keeping you safe."

As of last Thursday, the reward offered for the gunman in the shooting had grown to nearly 700,000, officials said.

Both deputies had been on the job for about 14 months.

GET UPDATES ON THIS STORY FROM FOX NEWS.