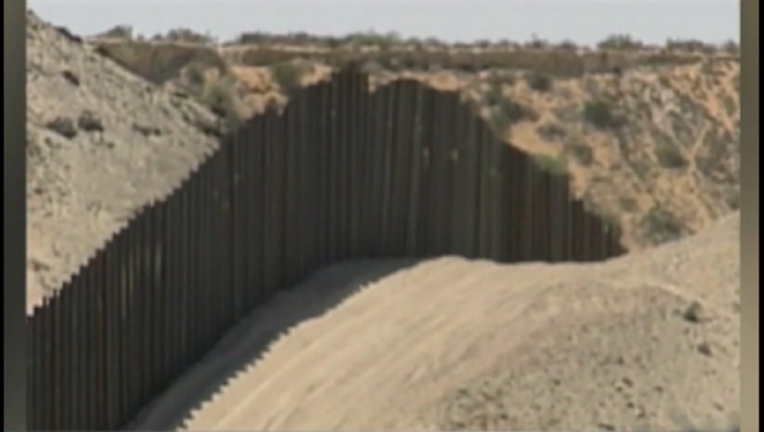 WASHINGTON (AP) - President Donald Trump doesn't see the need for a proposed border wall to stretch the length of the roughly 2,000-mile (3,218 kilometer) frontier with Mexico.

Trump's comments on the wall are the most definitive description he has given on what became a primary campaign promise. During the campaign vowed to oversee construction of a "big beautiful wall, with a big beautiful door" to let approved immigrants come into the United States.

But on his way to Paris, Trump told reporters aboard Air Force One, "It's a 2,000 (3,218 kilometer) mile border, but you don't need 2,000 miles of wall because you have a lot of natural barriers. You have mountains. You have some rivers that are violent and vicious. You have some areas that are so far away that you don't really have people crossing."

Trump's remarks were informal and initially not allowed to be reported. The White House later provided a partial transcript of them.

There are already about 650 miles (1,046 kilometers) of fencing along the border, all of which is see-through.

The Mexican border in much of Texas is defined by the Rio Grande, though parts of that river are little more than a trickle of water. About 24 miles (38 kilometers) of the border in Arizona is marked by the Colorado River.

"You have to be able to see through it," Trump said, adding that border agents need to know what or who is on the other side of the fence to avoid being hit by sacks of drugs and other contraband.

"As horrible as it sounds, when they throw the large sacks of drugs over, and if you have people on the other side of the wall, you don't see them. They hit you on the head with 60 pounds (27 kilograms) of stuff? It's over," Trump said.

Drug smugglers have tried to fling bundles of drugs over parts of the roughly 650 miles of border that already has fencing or other barriers, using tactics including sling shots and catapults. But it's unclear if anyone has ever been injured by the flying contraband.

Earlier this year the government issued two notices for border wall proposals. The first called for a solid structure up to 30 feet (9.14 meters) high that couldn't be easily breached. The second bid notice called for other types of walls, including something that could be seen through.

Homeland Security Secretary John Kelly has said that border agents need to be able to see what is on the other side of a barrier for security and safety reasons. He has repeatedly said that Trump's proposed wall would not be "sea to shining sea," from the Pacific Ocean in the west to the Gulf of Mexico in the east.

Assaults on Border Patrol agents are on the rise in recent months and the agency has long said that rocks hurdled at agents are a serious safety concern.