WASHINGTON - President Trump on Tuesday dared Congress to impeach him over the Ukraine controversy, posting an image of a deep-red 2016 election map in an implicit suggestion that Democrats are threatening to overturn the will of the voters -- as he and his allies try to go on offense over the impeachment probe.

“Try to impeach this,” the image tweeted by the president said.

Democrats moved forward last week with an impeachment inquiry over questions surrounding Trump’s July call to Ukrainian President Volodymyr Zelensky. In that call, he urged an investigation involving Joe Biden and his son's ties to an energy company in the country -- specifically, Biden's successful efforts as vice president to oust a prosecutor who was investigating that company. Democrats claim Biden's intervention was driven by corruption concerns and that Trump improperly pushed Ukraine's government to investigate a political opponent, using U.S. aid as a cudgel. 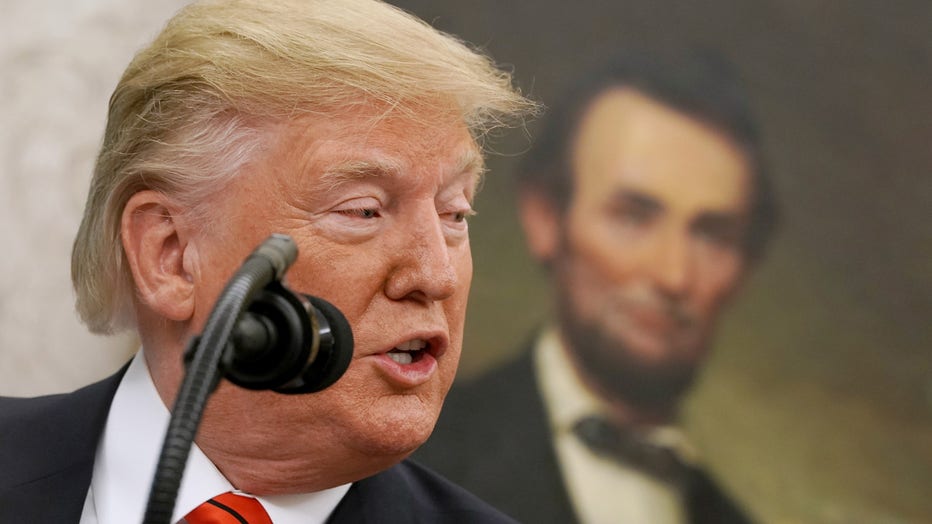 U.S. President Donald Trump delivers remarks during the ceremonial swearing in of Labor Secretary Eugene Scalia in the Oval Office at the White House September 30, 2019 in Washington, DC. (Photo by Chip Somodevilla/Getty Images)

But Trump and top Republicans have been pushing back aggressively, trying to turn the impeachment probe to their advantage by presenting the probe as the latest conspiracy drummed up by Democrats and their media allies unhappy at his 2016 win. Recent fundraising reports from the Trump re-election campaign and related groups indicate the issue is driving a surge in donations.

The image of the 2016 election map is one of a number of politically provocative statements Trump has made within the last week. He has doubled down on his claim that his phone call was “perfect,” branded the whistleblower who submitted a complaint about the call “fake,” and called on House Intelligence Chairman Adam Schiff, D-Calif., to resign for his “parody” of Trump’s words at a House hearing.

He also sparked outrage by quoting Pastor Robert Jeffress, who predicted on Fox News that if Trump was impeached, it would cause a “Civil War like fracture in this Nation from which our country will never heal.” This drew some criticism from members of his own party, with Rep. Adam Kinzinger, R-Ill., calling it "beyond repugnant."

A Trump impeachment push is highly unlikely to succeed, requiring a two-thirds majority to convict in the Republican-controlled Senate. But the push could have a significant effect one way or another on the 2020 election in the way it rallies the parties’ bases, and the effect it has on independents and moderates.

As polls show support for impeachment creeping up nationally and it becomes a rallying cry for the Democratic Party base, Republicans are banking that the impeachment push will also act as a shot in the arm for their own base, while turning off moderates who care more about kitchen-table issues like health care and immigration.

The Republican National Committee launched a “Stop the Madness” counter-impeachment campaign Monday, targeting House Democrats and vowing to cause havoc going into 2020.

“Our goal is to cause chaos,” RNC spokesman Rick Gorka said. “This is a poison pill. When you couple the impeachment process with the socialist policies being espoused by 2020 Democrats, it’s going to sink their chances at the ballot box, especially with those crucial swing voters and independents across the country.”

There are signs already that the impeachment push is a potential fundraising boon for Trump and his allies. Republican officials said the Trump campaign, along with the RNC, brought in $5 million in the 24 hours after Pelosi’s announcement. National Republican Congressional Committee officials also said its online fundraising soared by 608 percent on the day Pelosi announced the inquiry.

Meanwhile, WinRed -- a new GOP fundraising platform targeting small-dollar donations -- hauled in just over $30 million in the third fundraising quarter, driven by a surge over the last week.

In an interview with Fox News, WinRed’s President Gerrit Lansing said fundraising numbers spiked after the inquiry was announced.

“It just poured gas on the situation where there is a ton of money being raised in all levels and all campaigns,” Lansing said.