﻿The name of the Belgian Malinois was not previously disclosed, as it was classified information.

WASHINGTON - The heroic military dog who helped take out ISIS leader Abu Bakr al-Baghdadi is headed to the White House.

President Trump on Wednesday tweeted a photo of the dog – whom he identified as "Conan" – and said the pup will be "leaving the Middle East for the White House sometime next week!" 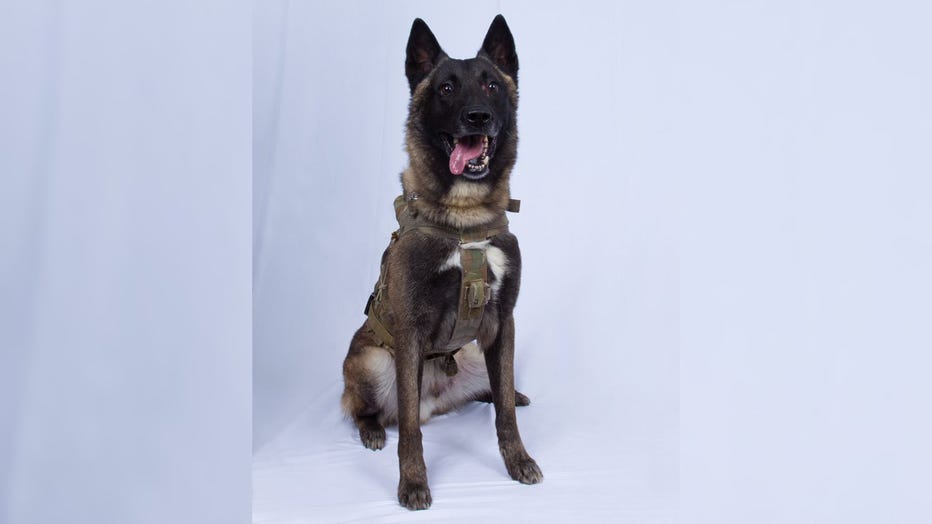 President Donald Trump shared a photo of the heroic military dog on Twitter, who he later identified as “Conan." (Photo credit: Department of Defense)

The photo of Conan, whom Newsweek reports was named after comedian and talk show host Conan O'Brien, is clearly edited and shows Trump awarding the military pooch a medal. Trump dubbed it a "very cute recreation," but said the "'live' version of Conan" will be visiting Washington, D.C. soon.

The Belgian Malinois' name was not previously disclosed, as it was classified information. The dog's name had remained a military secret because of the nature of the raid that killed Baghdadi on Saturday.

Conan was hurt during the mission after being exposed to live electrical wires while pursuing Baghdadi through a tunnel underneath a compound in northwestern Syria, Gen. Frank McKenzie, who leads U.S. Central Command, said Wednesday. The dog, who has worked with special operations forces for four years and taken part in about 50 missions, has since returned to active duty.

McKenzie said military working dogs, or MWDs, are "critical members of our forces." Gen. Mark Milley, the chairman of the joint chiefs of staff, previously told reporters the tough dog, trained since birth to serve alongside U.S. troops, "performed a tremendous service."

Most dogs trained to serve in the U.S. military are Belgian Malinois and German and Dutch shepherds, according to the nonprofit U.S. War Dogs Association. These breeds are selected "because they are very aggressive, smart, loyal and athletic.“

"That's the kind of dog you want to lead a patrol like this," Ron Aiello, a former Marine dog handler and president of the nonprofit, told The Associated Press. "They are the first line of defense. They go out front."

All U.S. MWDs are trained with the 341st Training Squadron at Lackland Air Force Base in San Antonio, Texas. These animals are "used in patrol, drug and explosive detection, and specialized mission functions for the Department of Defense and other government agencies."