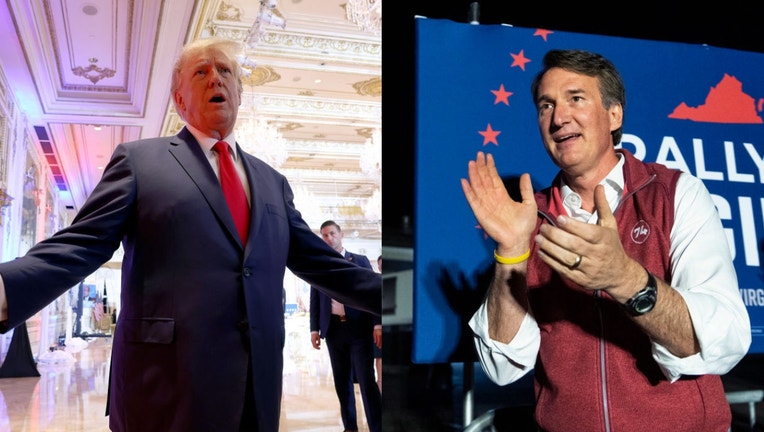 Former President Donald Trump, who is expected to announce a 2024 presidential run on November 15, is already taking aim at some of his potential opponents, including Virginia Governor Glenn Youngkin.

The former president posted on his Truth social media platform that Youngkin could not have won the Virginia governor's race in 2021 without his help.

"I endorsed him, did a very big Trump Rally for him telephonically, got MAGA to Vote for him - or he couldn’t have come close to winning. But he knows that, and admits it," Trump wrote in the post.

He then went on to write that Youngkin is "having a hard time with the Dems in Virginia." The post also made a reference suggesting that Youngkin's name sounds Chinese.

"I work really hard to bring people together, I do not call people names. This is a moment for us to come together. As a nation, we still have some elections outstanding that haven't been finalized and we've got to find a forward. We are potentially going to have divided government in Washington and just like we have divided government in Virginia, we have proven that we can come together and get things done."

The attack on Youngkin comes one day after Virginia’s Republican lieutenant governor, Winsome Earle-Sears, said in a TV interview Thursday that if Donald Trump makes a third bid for the White House, she would not support him.

Earle-Sears is one of many Republicans who called out Trump after the GOP's underwhelming results during the 2022 midterms, including Trump's former ally Chris Christie.

Trump sought to use the midterms as an opportunity to prove his enduring political influence after losing the White House in 2020. He endorsed more than 330 candidates in races up and down the ballot.

He notched some big wins, particularly in Ohio, where his pick for the Senate, "Hillbilly Elegy" author JD Vance, sailed to an easy victory after Trump's endorsement catapulted him to the front of a crowded primary pack. In North Carolina, Rep. Ted Budd, an early Trump pick, kept an open Senate seat in GOP hands.

Virginia’s Republican lieutenant governor, Winsome Earle-Sears, said in a TV interview Thursday that if Donald Trump makes a third bid for the White House, she would not support him.

But Trump lost some of the night's biggest prizes, particularly in Pennsylvania, where Dr. Mehmet Oz, who only narrowly won his Senate primary with Trump's backing, lost to Democrat John Fetterman. Trump-backed candidates also lost governors' races in Pennsylvania, Michigan and Maryland, and a Senate race in New Hampshire.

In addition to attacking Youngkin, Trump released a statement also saying Florida Governor Ron DeSantis, who won re-election in Florida during the midterms and is expected to make a 2024 presidential run, owes his success to the former president.

"Ron came to me in desperate shape in 2017—he was politically dead, losing in a landslide to a very good Agriculture Commissioner, Adam Putnam, who was loaded up with cash and great poll numbers. Ron had low approval, bad polls, and no money, but he said that if I would Endorse him, he could win," Trump wrote. "I didn’t know Adam so I said, ‘Let’s give it a shot, Ron.’ When I Endorsed him, it was as though, to use a bad term, a nuclear weapon went off."

He then went on to question whether DeSantis retains loyalty to the former president.

"And now, Ron DeSanctimonious is playing games! The Fake News asks him if he’s going to run if President Trump runs, and he says, ‘I’m only focused on the Governor’s race, I’m not looking into the future.' Well, in terms of loyalty and class, that’s really not the right answer," Trump wrote.

President Biden, who has also said his intention is to run again in 2024, spoke about the potential race between Trump and DeSantis saying that it would be "fun watching them take on each other."