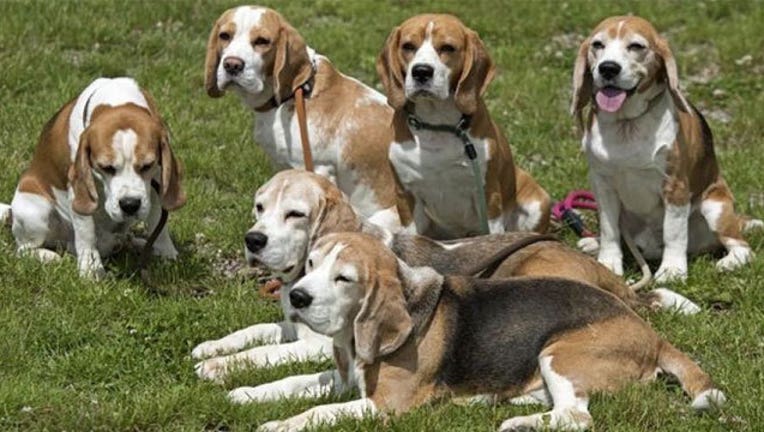 KANSAS CITY, Mo. (AP) — The University of Missouri is defending its research practices after a national pet-adoption group publicly decried an experiment that led to six female beagles being euthanized.

The California-based Beagle Freedom Project, which is suing the university system over $82,000 in fees it says it is being charged for an open-records request, said it learned of the dogs' deaths after happening upon a published study about treatment for damaged corneas.

As detailed in April in the Journal of Veterinary Ophthalmology, the study said roughly 1-year-old beagles had their left eyes intentionally damaged while they were anesthetized. Half of the animals then were given a topical acid treatment to determine if that healed the eye damage; it didn't, and the dogs eventually were put to death.

Kevin Chase, vice president of the BFP, which rescues former research animals ranging from ponies to goldfish for adoption, called Mizzou's experiment "a colossal failure" and "cruel," noting the "cornea's top layer is filled with thousands of tiny nerve endings."

"Caging dogs in a laboratory, intentionally damaging their corneas, and then killing them is about as ethical as picking people off the street and hitting them over the head with a pipe in order to test new concussion treatments," Chase said.

Animal-rights groups widely say nearly 400 U.S. research labs use nearly 70,000 dogs each year, the vast majority of which are beagles, usually because of their docility.

The university issued a statement saying the beagles were anesthetized during the procedure and were given pain medications if any discomfort was evident. The research, meant to develop painless or noninvasive treatments for corneal injuries, "improves the quality of life for both animals and humans," the university insisted.

"Animal research is only done when scientists believe there is no other way to study the problem, and our researchers respect their research animals greatly and provide the utmost care," the statement read. "The animals were treated humanely and every effort was made to ensure dogs were as comfortable as possible during the tests to study the effectiveness of the new drug treatment."

That statement did not say whether its research animals commonly are euthanized. In the study's conclusion, the four researchers acknowledge the small sample size, saying it was determined before undertaking the study that two dozen of the dogs would be required to detect a significant difference in the healing rates.

The BFP successfully has lobbied for "beagle bills," which essentially require healthy dog and cat test subjects to be offered up to rescue organizations instead of having them automatically euthanized. The Humane Society of the United States says such laws now exist in Connecticut, California, Minnesota, Nevada and New York.

The BFP sued the University of Missouri in May, alleging it violated the state's Sunshine Law by charging more than $82,000 for documents that the group sought related to dogs and cats on the Columbia campus. Chase called the fees "exorbitant" and an effort to stymie disclosure.

His group routinely files open-records requests in search of post-research candidate dogs for rescue and was looking through previously published reports about University of Missouri animal research when BFP happened upon the study involving the beagles.

"Had they just given us the records for current protocols, we probably wouldn't have dug that deep," Chase said.