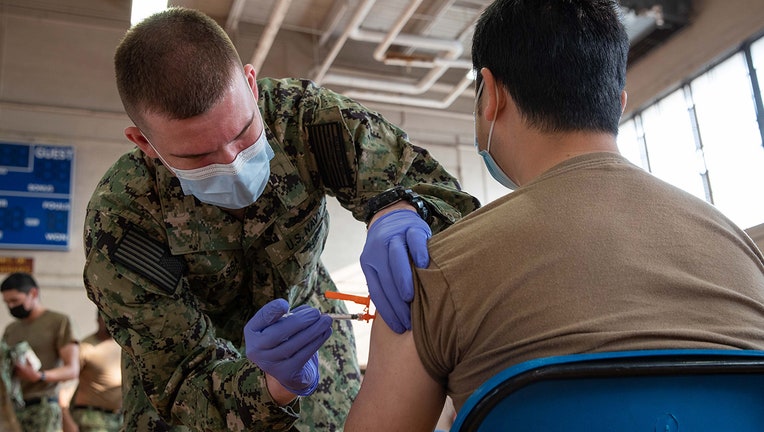 WASHINGTON (AP) - As deadlines loom for military and defense civilians to get mandated COVID-19 vaccines, senior leaders must now wrestle with the fate of those who flatly refuse the shots or are seeking exemptions, and how to make sure they are treated fairly and equally.

The vast majority of the active duty force has received at least one shot, but tens of thousands have not. For some it may be a career-ending decision. Others could face transfers, travel restrictions, limits on deployments and requirements to repay bonuses.

Exemption decisions for medical, religious and administrative reasons will be made by unit commanders around the world, on what the Pentagon says will be a "case-by-case" basis. That raises a vexing issue for military leaders who are pushing a vaccine mandate seen as critical to maintaining a healthy force, but want to avoid a haphazard, inconsistent approach with those who refuse.

"Because of some of the sensitivities of this particular vaccine, I think that we just wanted to ensure that we were consistent and equitable" in meting out a punishment that would be "a repercussion of continuing to refuse a valid order."

Military vaccination rates are higher than those of the general population in the United States and the reasons for objecting – often based on misinformation – are similar to those heard throughout the country. But unlike most civilians, military personnel are routinely required to get as many as 17 vaccines, and face penalties for refusing.

The military services are reporting between 1%-7% remain unvaccinated. Defense Secretary Lloyd Austin has called for compassion in dealings with those troops, which totals nearly 60,000 active duty service members, according to data released last week. Officials say the numbers change daily, and include those who may have gotten or requested an exemption. They have declined to say how many troops are still seeking an exemption or refused the vaccine.

Asked about possible variations in the treatment of those seeking exemptions or refusing the vaccine, Pentagon press secretary John Kirby said it's up to the services. "Each case is going to be treated specifically and individually as it ought to be," he said.

The U.S. military has several million firearms at bases worldwide. Keeping track of them all is no easy task. An Associated Press investigation has found that some guns still end up on America's streets, used in shootings and robberies, despite the military's procedures to prevent loss or theft. In many cases, weapons that have been lost or stolen are never found. (By The Associated Press)

Commanders can also move service members into another job, deny them overseas deployment or limit unit access if they get an exemption or while a request is being reviewed. Those steps may be more common in smaller units such a special operations forces who usually deploy in small numbers.

The Navy has warned that sailors who refuse the shot and don't get an exemption may have to refund bonuses and other financial payments, based on existing military justice procedures for disobeying a lawful order. The other services are expected to follow similar procedures.

The Air Force may be the test case in some instances, because they are the first to hit a deadline. The more than 335,000 airmen and Space Force guardians must be fully vaccinated by Tuesday, and the Air Guard and Reserve by Dec. 2. According to Air Force data, as many as 12,000 active duty airmen and guardians were still unvaccinated as of late last week. Some have requested or gotten exemptions, others have refused outright. They have until Monday to request exemptions.

Air Force Col. Robert Corby, commander of the 28th Medical Group at Ellsworth Air Force Base, said that after the vaccine became mandatory in late August, appointments for shots at the base clinic doubled. He said troops have an array of questions and concerns, and commanders, chaplains and medical personnel are providing information.

"I think you also have a segment of the population that probably does not feel that they are really at risk for COVID-19," he added.

Air Force Capt. Molly Lawlor, 28th Bomb Wing chaplain, said a "very small percentage" are seeking a religious exemption at the base. "People are just trying to figure out how this new requirement fits into their belief system and the decisions that they want to make," she said.

The more than 765,000 Defense Department civilians will be close behind the Air Force, with a mandated vaccine date of Nov. 22. Supervisors are grappling with the complex task of checking and recording the vaccine status of their workers, and determining who will be the final exemption arbiter.

Civilians have until Nov. 8 to seek an exemption, and as of last week, fewer than half had provided vaccination proof. Those who refuse the vaccine and don't get an exemption will get five days for counseling. If they still refuse, they will be suspended for up to 14 days without pay, and could then be fired. 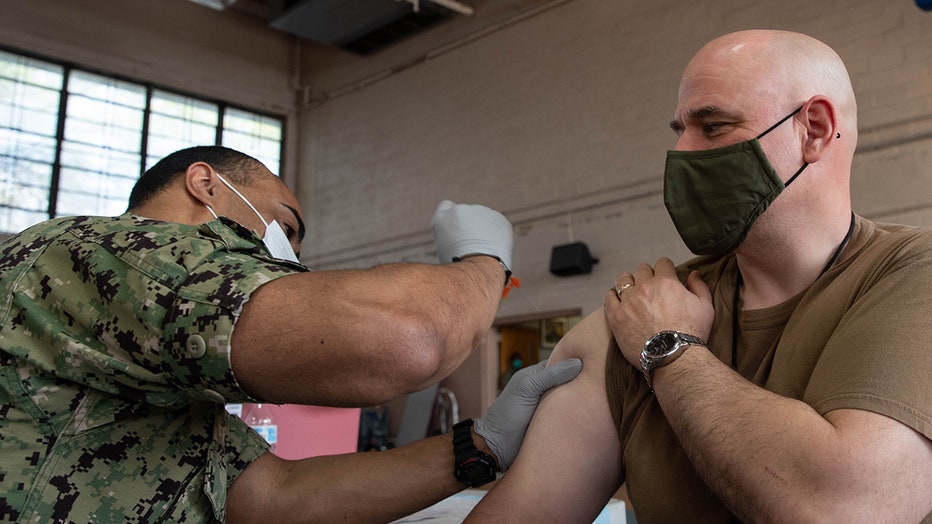 Vaccination numbers fluctuate for the military services, and drop off considerably for the National Guard and Reserve.

A bit more than half of the Army National Guard has gotten at least one shot, while the Air Guard is at 87%. Air Guard members must be fully vaccinated by early December, while the Army Guard, which is much larger and more widely scattered around the country, has until June,.

The most successful service has been the Navy, which says that only 1% of the force is unvaccinated as of last week — or about 3,500 sailors. The Air Force and Space Force was second, with 3.6% unvaccinated, followed by the Army and Marine Corps at about 7%.

Adm. Michael Gilday, chief of naval operations, told The Associated Press that even before the shots were mandated, some warships were seeing vaccination rates of 98%-99%.

"We feel like we've been leading the way across the services," he said. "We've been promoting the vaccines since we started vaccinating last December, January timeframe." For those who don't want the vaccine, "we'll deal with those on an individual basis as those challenges come up," he said.

Marine Col. Speros Koumparakis, commander of Marine Corps Base Hawaii, said that the number of Marines who have requested exemptions at the base is fewer than two dozen, and most of those are seeking religious exemptions.

He said chaplains and pastors have been made available to discuss the religious issues, and he does the initial review of any request. But ultimately, decisions may be made by personnel leaders at Marine Corps Base Quantico in Virginia.