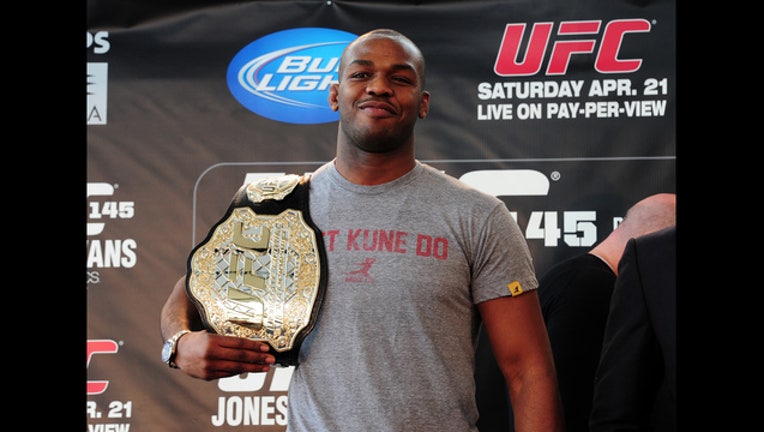 Jones is widely considered the top pound-for-pound fighter in his sport. The potential violation stems from a sample collected after his weigh-in July 28 for his title fight against Daniel Cormier at UFC 214 in Anaheim, California.

Jones (23-1) beat Cormier with a vicious third-round head kick, reclaiming his 205-pound belt after sitting out the previous year under suspension for his first failed doping test. The victory appeared to be a return to glory for a fighter who has repeatedly hindered his stellar career with misbehavior outside the octagon.

Jones was stripped of his belt in 2015 after his arrest for his involvement in a hit-and-run accident. He was scheduled to fight Cormier for the title in July 2016, but was pulled from the UFC 200 card and eventually suspended for what he claimed was a failed test due to a sexual enhancement pill.

Last month, the 30-year-old Jones emphatically denied he has ever used performance-enhancing drugs.

Jones hasn't yet been stripped of his light heavyweight title for a second time, but it will be a formality if the doping violation is confirmed. Cormier held the belt for most of Jones' absence, and he will likely be the champion again, UFC President Dana White said.

"Jon and I have been mad at each other since UFC 200, but the reality is we've been here for this kid every step of the way," White said. "How many times did I fly to Albuquerque when he was in trouble? The list goes on and on, what we've done for this guy. It's really sad."

Jones' camp and his manager, Malki Kawa, released a statement: "We are all at a complete loss for words right now. Jon, his trainers, his nutritionists and his entire camp have worked tirelessly and meticulously the past 12 months to avoid this exact situation. We are having the samples tested again to determine the validity or source of contamination. Jon is crushed by this news and we are doing whatever we can as a team, to support him."

In a statement, Cormier said he was "disappointed" and "very emotional" about the news.

"In my mind, on July 29, I competed and I lost," said Cormier, who is on vacation in Hawaii with his family. "I thought Jon Jones was the better man that day. I don't know what to think anymore. I can't believe we are going through all of this again. We will see what happens next."

If the violation is confirmed, Jones is almost certain to face a multiyear suspension from the sport, taking away even more of his fighting prime. The UFC also will be harmed by the lengthy absence of its best fighter and a burgeoning pay-per-view draw.

The penalties for a second offense range from one to four years, depending on several aggravating or mitigating circumstances, said Jeff Novitzky, the UFC's vice president of athlete health and performance.

"Jon definitely has one penalty under the system," Novitzky said. "So the second penalty, if it were to come to that, basically doubles the amount of the first."

White revealed that the UFC was hoping to book Jones in a fight against heavyweight champion Stipe Miocic in Detroit later this year. Instead, two divisions have been thrown into turmoil.

The UFC also could lose its dream matchup between Jones and former heavyweight champion Brock Lesnar. The superstars both appeared eager to meet next year in a heavyweight fight that would be among the biggest events in the UFC's history.

"It's not over yet," White said. "He's got to go through the (legal) process. Maybe there was something crazy that happened for this stuff to get into his system. So I don't know."