Amid new talks between Ukraine and Russia in Turkey, Russia's military will "fundamentally" cut back operations near the Ukraine capital of Kyiv and the northern city of Chernihiv as an attempt to "increase trust" during talks to end the fighting. A large portion of Russia's military has remained on the outskirts of Kyiv, unable to make further advances as Ukrainian forces continue to fight back.

KYIV, Ukraine - Russia announced Tuesday it will significantly scale back military operations near Ukraine’s capital and a northern city, as the outlines of a possible deal to end the grinding war came into view at the latest round of talks.

Ukraine's delegation at the conference, held in Istanbul, laid out a framework under which the country would declare itself neutral and its security would be guaranteed by an array of other nations.

Moscow's public reaction was positive, and the negotiations are expected to resume Wednesday, five weeks into what has devolved into a bloody war of attrition, with thousands dead and almost 4 million Ukrainians fleeing the country.

Amid the talks, Russian Deputy Defense Minister Alexander Fomin said Moscow has decided to "fundamentally ... cut back military activity in the direction of Kyiv and Chernihiv" to "increase mutual trust and create conditions for further negotiations."

He did not immediately spell out what that would mean in practical terms.

The announcement was met with skepticism from the U.S. and others.

Ukrainian President Volodymyr Zelenskyy said Russia cannot be trusted. Although the signals from the talks are "positive," they "can’t silence explosions of Russian shells," he said in a video address.

Zelenskyy said it was Ukrainian troops who forced Russia's hand, adding that "we shouldn’t let down our guard" because the invading army still "has a great potential to continue attacks against our country."

Ukraine will continue negotiations, he said, but officials do not trust the word of the country that continues "fighting to destroy us."

While Moscow portrayed it as a goodwill gesture, its ground troops have become bogged down and taken heavy losses in their bid to seize Kyiv and other cities. Last week and again on Tuesday, the Kremlin seemed to lower its war aims, saying its "main goal" now is gaining control of the mostly Russian-speaking Donbas region in eastern Ukraine.

U.S. President Joe Biden, asked whether the Russian announcement was a sign of progress in the talks or an attempt by Moscow to buy time to continue its assault, said: "We’ll see. I don’t read anything into it until I see what their actions are."

U.S. Secretary of State Antony Blinken suggested Russian indications of a pullback could be an attempt by Moscow to "deceive people and deflect attention."

It wouldn't be the first time. In the tense buildup to the invasion, the Russian military announced that some units were loading equipment onto rail cars and preparing to return to their home bases after completing exercises. At the time, Putin was signaling interest in diplomacy. But 10 days later, Russia launched its invasion.

Western officials say Moscow is now reinforcing troops in the Donbas in a bid to encircle Ukraine’s forces. And Russia's deadly siege in the south continues, with civilians trapped in the ruins of Mariupol and other bombarded cities. 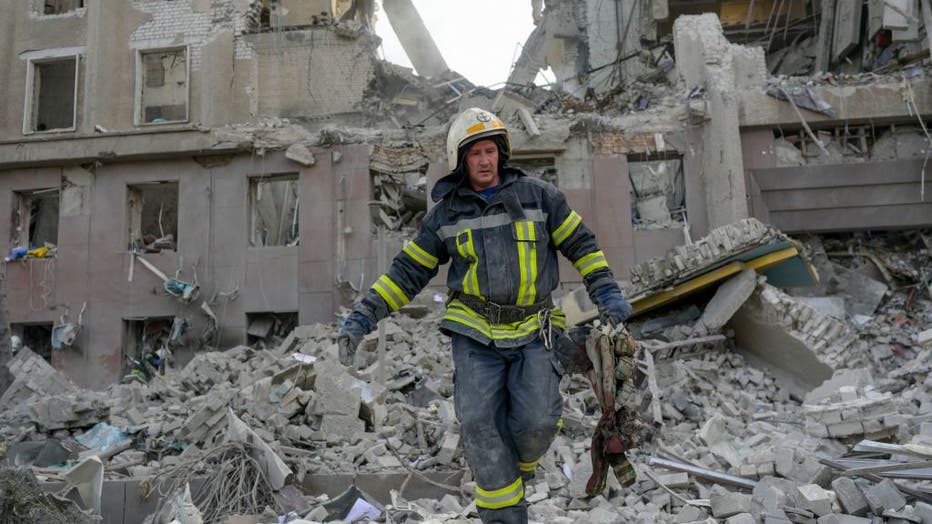 FILE - A firefighter clears the rubble of a government building hit by Russian rockets in Mykolaiv on March 29, 2022. (Photo by BULENT KILIC/AFP via Getty Images)

Even as negotiators gathered, Russian President Vladimir Putin's forces blasted a gaping hole in a nine-story government administration building in a strike on the southern port city of Mykolaiv, killing at least 12 people, emergency authorities said. The search for more bodies in the rubble continued.

"It’s terrible. They waited for people to go to work" before striking the building, said regional governor Vitaliy Kim. "I overslept. I’m lucky."

Pentagon spokesman John Kirby said the U.S. has detected small numbers of Russian ground forces moving away from the Kyiv area, but it appeared to be a repositioning of forces, "not a real withdrawal."

He said it was too soon to say how extensive the Russian movements may be or where the troops will be repositioned.

"It does not mean the threat to Kyiv is over," Kirby said. "They can still inflict massive brutality on the country, including on Kyiv." He said Russian airstrikes against Kyiv continued.

Rob Lee, a military expert at the U.S.-based Foreign Policy Research Institute, tweeted of the Russian announcement: "This sounds like more of an acknowledgment of the situation around Kyiv where Russia’s advance has been stalled for weeks and Ukrainian forces have had recent successes. Russia doesn’t have the forces to encircle the city."

The meeting in Istanbul was the first time negotiators from Russia and Ukraine talked face-to-face in two weeks. Earlier talks were held in person in Belarus or by video.

Among other things, the Kremlin has demanded all along that Ukraine drop any hope of joining NATO.

Ukraine’s delegation offered a detailed framework for a peace deal under which a neutral Ukraine's security would be guaranteed by a group of third countries, including the U.S., Britain, France, Turkey, China and Poland, in an arrangement similar to NATO’s "an attack on one is an attack on all" principle.

Ukraine said it would also be willing to hold talks over a 15-year period on the future of the Crimean Peninsula, seized by Russia in 2014.

Vladimir Medinsky, head of the Russian delegation, said on Russian TV that the Ukrainian proposals are a "step to meet us halfway, a clearly positive fact."

He cautioned that the parties are still far from reaching an agreement, but said: "We know now how to move further toward compromise. We aren’t just marking time in talks."

President Joe Biden delivered remarks on Saturday to Ukrainian refugees in Warsaw Poland in the aftermath of Russia’s deadly invasion.

— In what appeared to be a coordinated action to tackle Russian espionage, the Netherlands, Belgium, the Czech Republic, Ireland and North Macedonia expelled scores of Russian diplomats.

— The head of the U.N. nuclear watchdog agency arrived in Ukraine to try to ensure the safety of the country’s nuclear facilities. Russian forces have taken control of the decommissioned Chernobyl plant, site in 1986 of the world’s worst nuclear accident, and of the active Zaporizhzhia plant, where a building was damaged in fighting.

— Russia has destroyed more than 60 religious buildings across the country in just over a month of war, with most of the damage concentrated near Kyiv and in the east, Ukraine’s military said.

— In the room at the Istanbul talks was Roman Abramovich, a longtime Putin ally who has been sanctioned by Britain and the European Union. Kremlin spokesman Dmitry Peskov said the Chelsea soccer team owner has been serving as an unofficial mediator approved by both countries. But the mystery surrounding his role has been deepened by news reports that he may have been poisoned during an earlier round of talks.

Over the past several days, Ukrainian forces have mounted counterattacks and reclaimed ground on the outskirts of Kyiv and other areas.

Ukrainian soldiers gathered in a trench for photos with Col. Gen. Oleksandr Syrskyi, who said that Ukraine had retaken control of a vast majority of Irpin, a key suburb northwest of the capital that has seen heavy fighting.

"We defend our motherland because we have very high morale," said Syrskyi, the commander in charge of the defense of Kyiv. "And because we want to win."

Ukrainian forces also took back Trostyanets, south of Sumy in the northeast, after weeks of occupation that left a landscape of Russian bodies, burned and twisted tanks and charred buildings.

Putin’s ground forces have been thwarted not just by stronger-than-expected Ukrainian resistance, but by what Western officials say are Russian tactical missteps, poor morale, shortages of food, fuel and cold weather gear, and other problems.

While that presents a possible face-saving exit strategy for Putin, it has also raised Ukrainian fears the Kremlin aims to split the country and force it to surrender a swath of its territory.

Karmanau reported from Lviv, Ukraine. Associated Press journalists around the world contributed to this report.