KYIV, Ukraine - Russian forces in Ukraine tried to storm a steel plant housing soldiers and civilians in the southern city of Mariupol on Saturday in an attempt to crush the last corner of resistance in a place of deep symbolic and strategic value to Moscow, Ukrainian officials said.

The reported assault on the eve of Orthodox Easter came after the Kremlin claimed its military had seized all of the shattered city except for the Azovstal plant, and as Russian forces pounded other cities and towns in southern and eastern Ukraine.

A 3-month-old baby was among six people killed when Russia fired cruise missiles at the Black Sea port city of Odesa, officials said.

President Volodymyr Zelenskyy, meanwhile, said he would meet Sunday in Kyiv with the U.S. secretary of state, Antony Blinken, and secretary of defense, Lloyd Austin. He announced the visit at in a news conference and did not immediately share more detail. The White House declined comment. 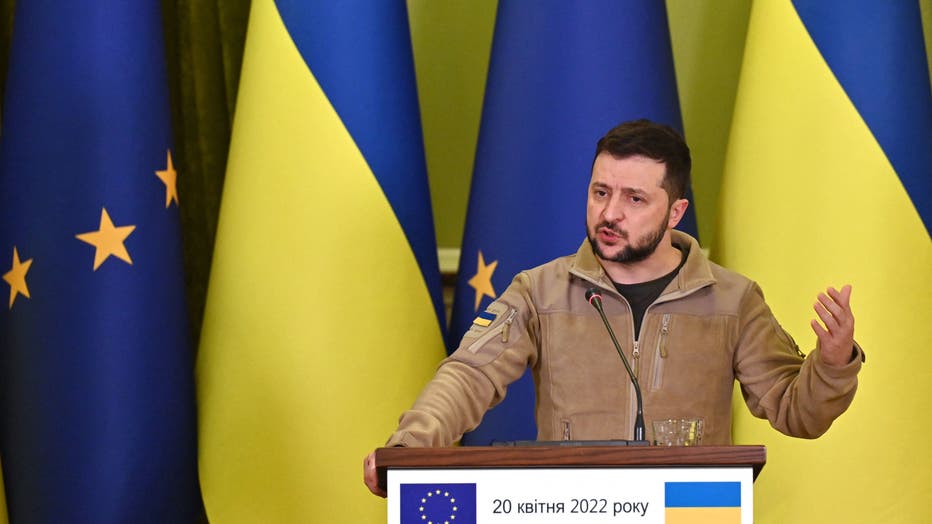 Ukraine's President Volodymyr Zelensky gestures as he speaks during a press conference following his talks with President of the European Council in Kyiv on April 20, 2022. (Photo by Sergei SUPINSKY / AFP) (Photo by SERGEI SUPINSKY/AFP via Getty Imag

Zelenskyy also bemoaned the death of the infant in Odesa. "The war started when this baby was one month old. Can you imagine what is happening?" he said. "They are just bastards. ... I don’t have any other words for it, just bastards."

The fate of the Ukrainians in the sprawling seaside steel mill in Mariupol wasn’t immediately clear; earlier Saturday, a Ukrainian military unit released a video reportedly taken two days earlier in which women and children holed up underground, some for as long as two months, said they longed to see the sun.

"We want to see peaceful skies, we want to breathe in fresh air," one woman in the video said. "You have simply no idea what it means for us to simply eat, drink some sweetened tea. For us, it is already happiness."

As the battle for the port ground on, Russia claimed it had taken control of several villages elsewhere in the eastern Donbas region and destroyed 11 Ukrainian military targets overnight, including three artillery warehouses. Russian attacks also struck populated areas.

In Sloviansk, a town in northern Donbas, AP witnessed two soldiers arriving at a hospital, one of them mortally wounded. Nearby, a small group of people gathered outside a church where a priest blessed them with water on Holy Saturday. 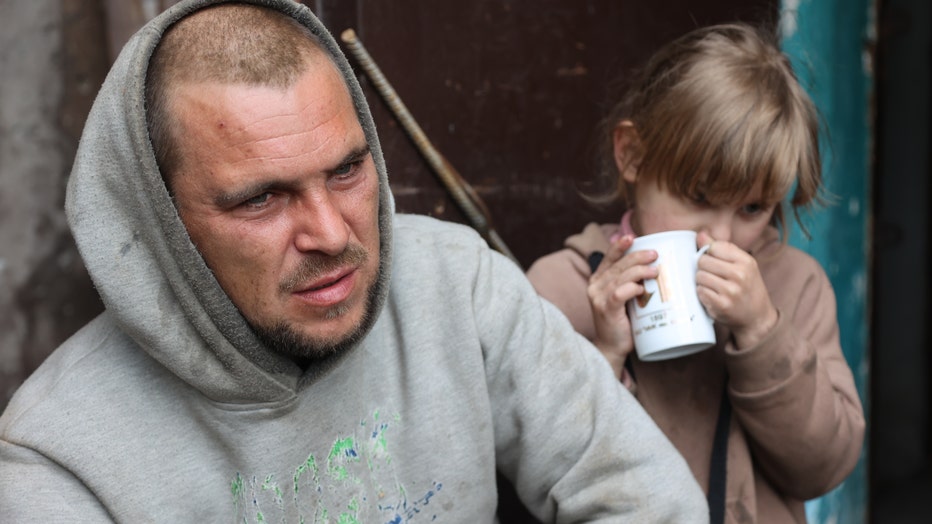 MARIUPOL, UKRAINE - APRIL 22: Residents are seen in Ukraine's besieged port city of Mariupol where the Russian Army has taken control, on April 22, 2022. (Photo by Leon Klein/Anadolu Agency via Getty Images)

While British officials said Russian forces had not gained significant new ground, Ukrainian officials announced a nationwide curfew ahead of Easter Sunday, a sign of the war’s disruption and threat to the entire country.

Mariupol has been a key Russian objective since the invasion began Feb. 24 and has taken on outsize importance in the war. Completing its capture would give Russia its biggest victory yet, after a nearly two-month siege reduced much of the city to a smoking ruin.

It would deprive the Ukrainians of a vital port, free up Russian troops to fight elsewhere and establish a land corridor to the Crimean Peninsula, which Moscow seized in 2014. Russia-backed separatists control parts of the Donbas.

An advisor to Ukraine's presidential office, Oleksiy Arestovich, said during a Saturday briefing that Russian forces resumed air strikes on the Azovstal plant and were trying to storm it. A direct attempt to take the plant would represent a reversal from an order Russian President Vladimir Putin gave two days earlier.

Russian Defense Minister Sergei Shoigu reported to Putin on Thursday that the whole of Mariupol, with the exception of Azovstal, had been "liberated." At the time, Putin ordered him not to send troops into the plant but instead to block it off, an apparent attempt to starve out those inside and force their surrender. 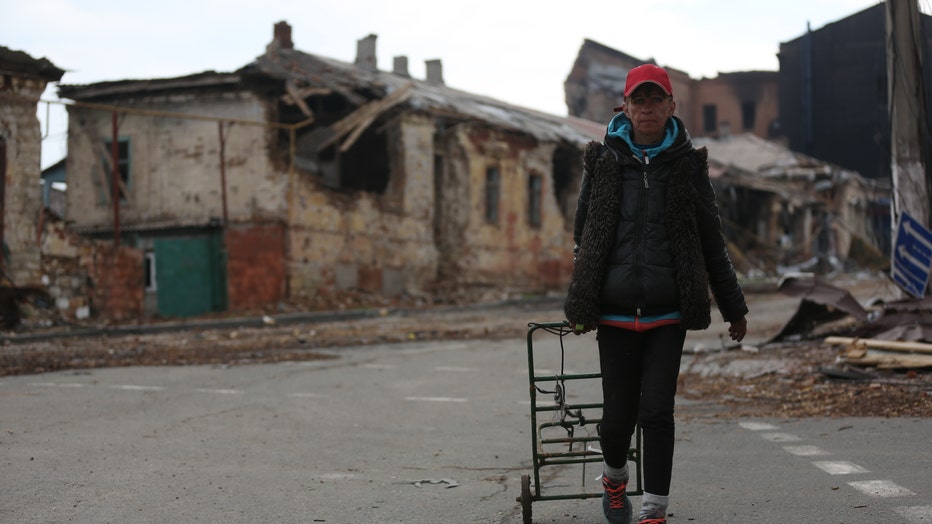 MARIUPOL, UKRAINE - APRIL 22: A view of the destruction in Ukraine's besieged port city of Mariupol where the Russian Army has taken control, on April 22, 2022. (Photo by Leon Klein/Anadolu Agency via Getty Images)

Ukrainian officials have estimated that about 2,000 of their troops are inside the plant along with civilians sheltering in its underground tunnels. Arestovic said they were trying to counter the new attacks.

Earlier Saturday the Azov Regiment of Ukraine’s National Guard, which has members holed up in the plant, released the video of around two dozen women and children. Its contents could not be independently verified, but if authentic, it would be the first video testimony of what life has been like for civilians trapped underground there. 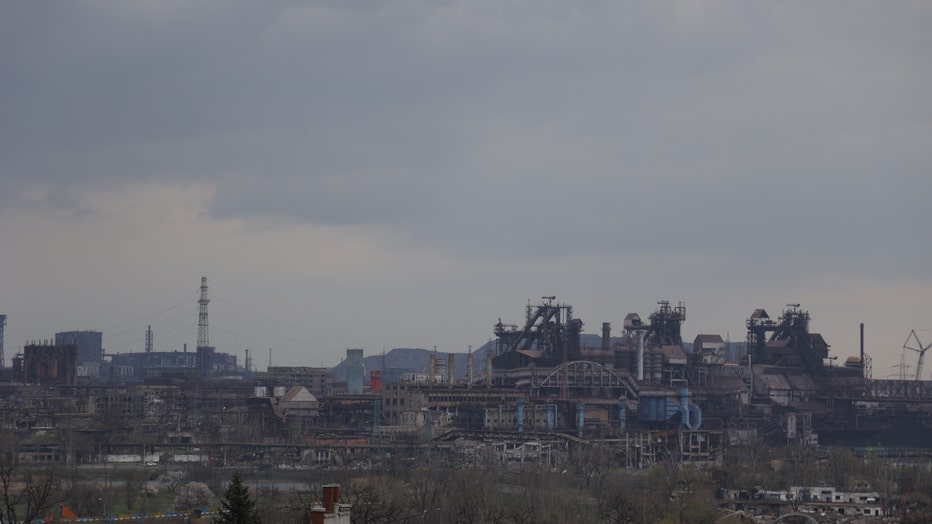 MARIUPOL, UKRAINE - APRIL 22: A view of the destruction in Ukraine's besieged port city of Mariupol where the Russian Army has taken control, on April 22, 2022. (Photo by Leon Klein/Anadolu Agency via Getty Images)

The video shows soldiers giving sweets to children who respond with fist-bumps. One young girl says she and her relatives "haven’t seen neither the sky nor the sun" since they left home Feb. 27.

The regiment’s deputy commander, Sviatoslav Palamar, told AP the video was shot Thursday. The Azov Regiment has its roots in the Azov Battalion, which was formed in 2014 by far-right activists at the start of the separatist conflict in eastern Ukraine and elicited criticism for some of its tactics.

More than 100,000 people — down from a prewar population of about 430,000 — are believed to remain in Mariupol with scant food, water or heat, according to Ukrainian authorities, who estimate that over 20,000 civilians have been killed in the city during the Russian blockade.

Satellite images released this week showed what appeared to be a second mass grave near Mariupol, and local officials accused Russia of burying thousands of civilians to conceal the slaughter taking place there. The Kremlin has not commented on the satellite images. 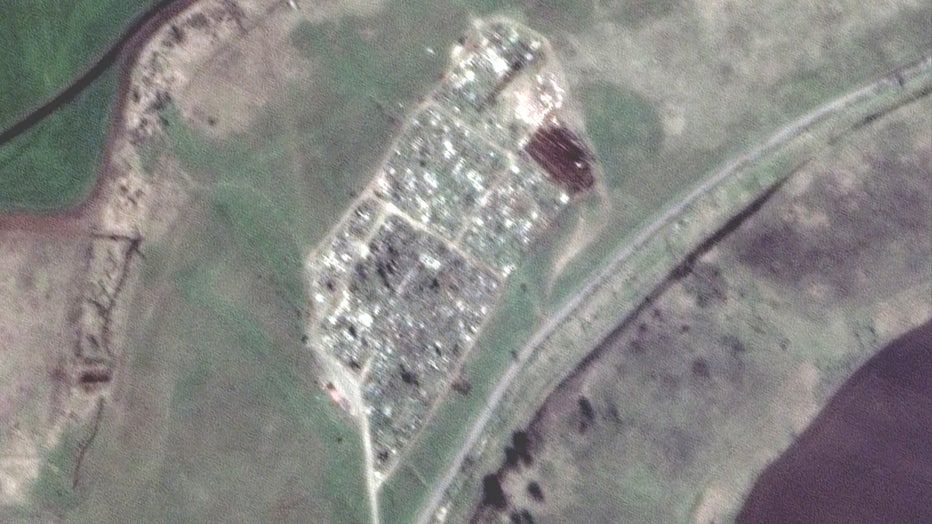 Ukrainian officials had said they would try again Saturday to evacuate women, children and older adults from Mariupol, but like previous plans to get civilians out of the city, it failed. Petro Andryushchenko, an adviser to Mariupol’s mayor, said Russian forces did not allow Ukrainian-organized buses to take residents to Zaporizhzhia, a city 227 kilometers (141 miles) to the northwest.

"At 11 o’clock, at least 200 Mariupol residents gathered near the Port City shopping center, waiting for evacuation," Andryushchenko posted on the Telegram messaging app. "The Russian military drove up to the Mariupol residents and ordered them to disperse, because now there will be shelling."

At the same time, he said, Russian buses assembled about 200 meters away. Residents who got on board were told they were being taken to separatist-occupied territory and not allowed to disembark, Andryushchenko said. His account could not be independently verified. 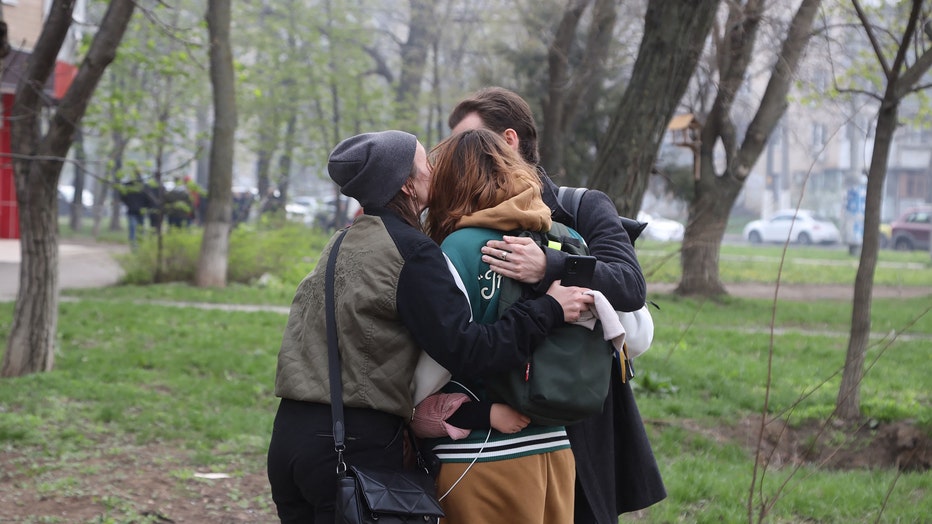 People react as they leave a multi-store building in Ukrainian city of Odessa after Russian troops strike on April 23, 2022. - (Photo by OLEKSANDR GIMANOV/AFP via Getty Images)

In the attack on Odesa, Russian troops fired at least six missiles, according to Anton Gerashchenko, an adviser to Ukraine’s interior minister. Defense forces repelled some of the rockets, but at least one hit, he said.

"Residents of the city heard explosions in different areas," Gerashchenko said via Telegram post. "Residential buildings were hit. It is already known about one victim. He burned in his car in a courtyard of one of the buildings."

The presidential chief of staff, Andriy Yermak, later reported that the 3-month-old baby was among the five dead.

In his nightly video address, Zelenskyy lamented all the war’s casualties, noting that the Easter holiday commemorates Christ’s resurrection after his death by crucifixion.

"We believe in the victory of life over death," he said. "No matter how fierce the battles are, there is no chance for death to defeat life. Everyone knows that. Every Christian knows that."