WAIMEA, Hawaii - The Mauna Loa Observatory in Hawaii measured carbon dioxide levels in the atmosphere and found the highest concentration ever recorded on April 3.

Researchers measured the average atmospheric carbon dioxide to be 421.21 parts per million, which means that humans have reached the halfway point to doubling pre-industrial levels of CO2.

"This work shows that CO2 is continuing to build up in the atmosphere. The COVID situation didn't make a marked change in the buildup, nor would we have expected a big impact," Ralph Keeling, a professor at Scripps Institution of Oceanography, UC San Diego told FOX Television Stations. 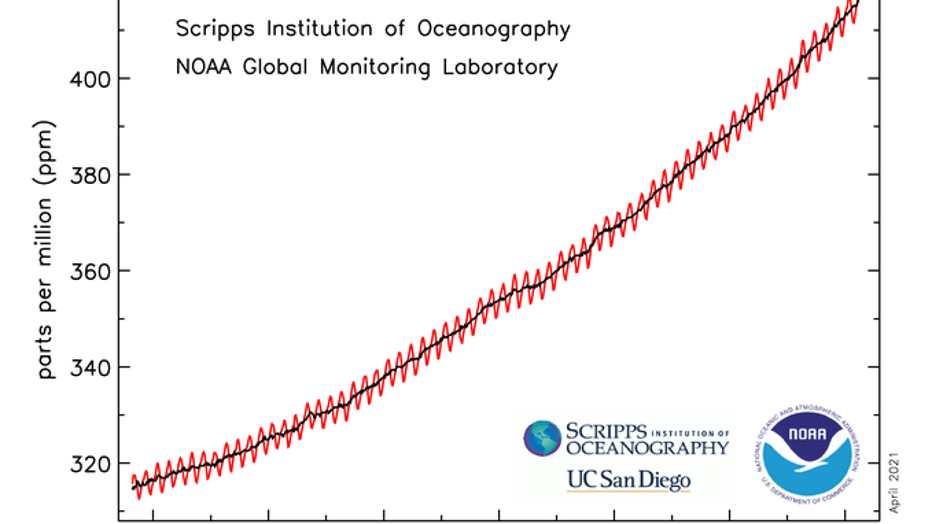 The changes brought about by the COVID-19 pandemic caused emissions to drop by about 7% in 2020 compared to 2019, but Keeling said the drop was too small and too short in duration to show up as a significant deviation to the upward trend of CO2.

"Even with the 7% drop, we were still adding to the level of CO2 in our atmosphere at a very high rate. Atmospheric CO2 behaves a bit like trash in a landfill. As we continue to emit, CO2 continues to pile up," Keeling said. "In recent years, the buildup has been sufficiently steady that each year's levels have exceeded the previous year's levels. This has continued now for decades, pushing into uncharted territory. CO2 levels haven't been this high for at least 2.5 million years and probably even longer."

President Joe Biden signed an executive order on Jan. 20 — just hours after being sworn in — to rejoin the Paris Agreement, a climate initiative to help reduce global carbon emissions by trying to limit the warming to 2 degrees Celsius (3.6 degrees Fahrenheit) above pre-industrial levels.

RELATED: Paris Climate Agreement: What it is, how it started and what happens now that the US has rejoined

This is a limit that scientists say, if reached, will up the consequences of climate change by the end of the century.

"There’s no time to start like today," Biden said in January as he signed the action in the Oval Office.

"I think they’re recognizing that it’s actually better to be in and part of the group of 195 countries trying to tackle climate change together than to be outside. Climate change is something that is hitting us all," Helen Mountford, the vice president for climate and economics at the World Resources Institute, told FOX Television Stations.

The carbon dioxide data on Mauna Loa began being recorded in the 1950s by C. David Keeling of the Scripps Institution of Oceanography. It constitutes the longest record of direct measurements of CO2 in the atmosphere.

NOAA started its own CO2 measurements in 1974, and they have run in parallel with those made by Scripps since then.

"It does look like CO2 continues to increase at the same rate as in previous years, which illustrates that we need to make aggressive investments in renewable energy sources to tackle our global heating emergency," NOAA wrote.

Based on this data, scientists are expecting the average annual concentration to be over 416 ppm.

"This year, CO2 levels rose to being ~50% larger than the natural level that prevailed for the ten thousand years before the industrial revolution. We are moving rapidly into the range that is considered dangerous from the standpoint of climate impacts. Any solution to the climate problem will require large cuts in fossil-fuel emissions globally in the future," Keeling said.

It’s important to note that Mauna Loa data are obtained at an altitude of 3,400 meters (about 2.11 miles) in the northern subtropics, so the readings may not be the same as the globally averaged CO2 concentration at the surface.