A UPS driver was captured going above and beyond on Sept. 14, 2021, as he placed packages in a plastic bag outside a house in Bridge City, Texas. Credit - Vanessa Gross via Storyful

BRIDGE CITY, Texas - A UPS driver was captured on video going above and beyond while dropping off packages in Texas amid Tropical Storm Nicholas dumping heavy rain on the region.

The driver was seen on Sept. 14 placing packages in plastic bags outside of a home in Bridge City, Texas, located about 25 miles southeast of Beaumont. The U.S. Gulf Coast was being hit by Nicholas at the time, drenching the area with flooding rains.

The driver, later identified as Chason Burch, had delivered packages to the home before and is aware of challenges they face, according to neighborhood resident Vanessa Gross.

Gross recorded a video of the thoughtful gesture and shared the moment on Facebook.

"This UPS driver delivered these packages to our neighbors. He placed them by the front door, rang the doorbell, and then walked over to my house to give us our package," Gross said in the Facebook post. "On his way back to his truck he noticed the packages hadn’t been brought inside yet and were getting wet. So he went back to his truck and got a plastic bag to put their packages in." 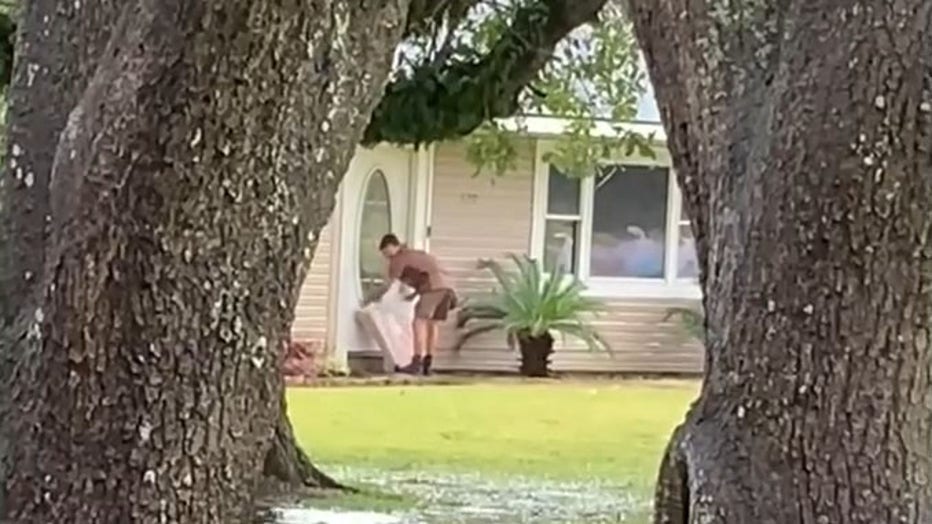 A UPS driver places packages in a plastic bag outside a house in Bridge City, Texas, to protect them from the rain on Sept. 14, 2021. (Credit: Vanessa Gross via Storyful)

Gross told Storyful her neighbors have two small children with special needs that are dependent on medical supplies. The UPS driver is aware of the urgency of the family’s deliveries and he always takes special care of their packages, she added.

The family had left their home the previous night to get an emergency supply of oxygen for one of the children and wouldn’t be home until the next day, according to Gross.

Nicholas had initially made landfall early Tuesday in Texas a Category 1 hurricane, the 14th named storm of the 2021 Atlantic hurricane season.

Thousands of people in Texas and Louisiana remained without power on Friday, according to the utility tracking website PowerOutage.US.