FLAGSTAFF, Ariz. (AP) - A first-of-its-kind federal study of Native American boarding schools that for over a century sought to assimilate Indigenous children into white society has identified more than 500 student deaths at the institutions, but officials expect that figure to grow exponentially as research continues.

The Interior Department report released Wednesday expands to more than 400 the number of schools that were established or supported by the U.S. government, starting in the early 19th century and continuing in some cases until the late 1960s. The agency identified the deaths in records for about 20 of the schools.

The dark history of Native American boarding schools — where children were forced from their families, prohibited from speaking their languages and often abused — has been felt deeply across Indian Country and through generations. 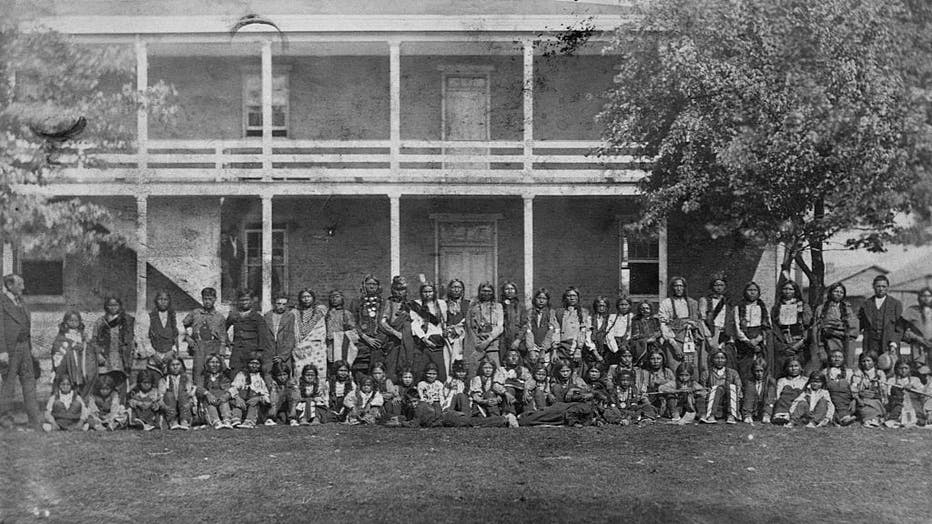 Many children never returned home, and the Interior Department said that with further investigation the number of known student deaths could climb to the thousands or even tens of thousands. Causes included disease, accidental injuries and abuse.

"Each of those children is a missing family member, a person who was not able to live out their purpose on this Earth because they lost their lives as part of this terrible system," said Interior Secretary Deb Haaland, whose paternal grandparents were sent to boarding school for several years.

The agency is in the process of poring through thousands of boxes containing more than 98 million pages of records, with help from many Indigenous people who have had to work through their own trauma and pain. Accounting for the number of deaths will be difficult because records weren’t always kept.

A second volume of the report will cover burial sites as well as the federal government’s financial investment in the schools and the impacts of the boarding schools on Indigenous communities, the Interior Department said. It has so far identified at least 53 burial sites at or near boarding schools, not all of which have marked graves.

Tribal leaders have pressed the agency to ensure that any children’s remains are properly cared for and returned to their tribes, if desired. To prevent them from being disturbed, the burial sites’ locations will not be publicly disclosed, said Bryan Newland, the Interior Department’s assistant secretary for Indian Affairs.

At a news conference Wednesday, Haaland choked back tears as she described how the boarding school era perpetuated poverty, mental health disorders, substance abuse and premature deaths in Indigenous communities. 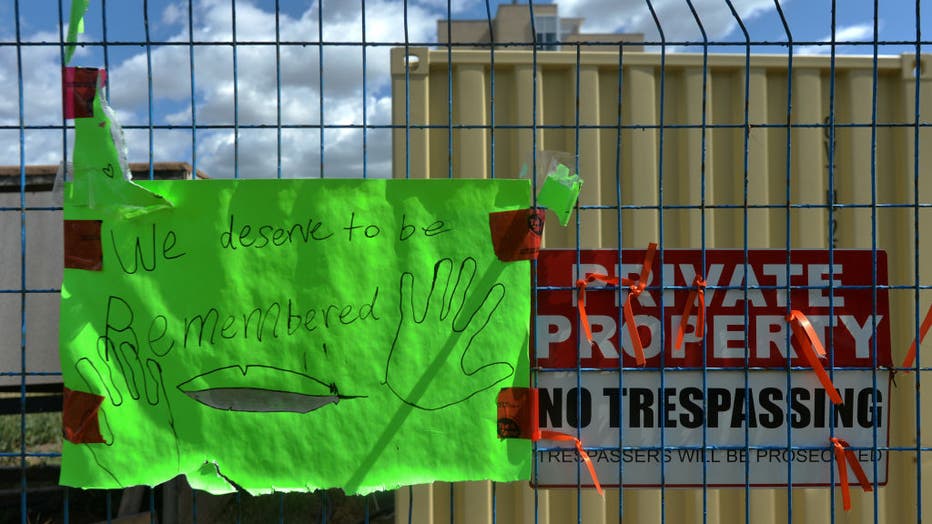 "Recognizing the impacts of the federal Indian boarding school system cannot just be a historical reckoning," she said. "We must also chart a path forward to deal with these legacy issues."

Haaland, who is Laguna, announced an initiative last June to investigate the schools’ troubled legacy and uncover the truth about the government’s role in them. The 408 schools her agency identified operated in 37 states or territories, many of them in Oklahoma, Arizona and New Mexico.

Basil Brave Heart attended Holy Rosary Mission in Pine Ridge, South Dakota, in the 1940s. He called having his hair cut by older students a "divide and conquer" strategy that made Native children take part in their own cultural destruction.

He was prohibited from practicing Lakota spiritual traditions and speaking his language that he said has a spiritual resonance not easily be translated into English.

"Taking our language away is huge," he said Wednesday. "It goes to our identity."

The Interior Department acknowledged the number of schools identified could change as more data is gathered. The coronavirus pandemic and budget restrictions hindered some of the research over the past year, said Newland, a citizen of the Bay Mills Indian Community.

The U.S. government directly ran some of the boarding schools. Catholic, Protestant and other churches operated others with federal funding, backed by U.S. laws and policies to "civilize" Native Americans. The federal government still oversees more than 180 schools in nearly two dozen states that serve Native Americans, but the schools’ missions are vastly different from the past.

The Interior Department report was prompted by the discovery of hundreds of unmarked graves at former residential school sites in Canada that brought back painful memories for Indigenous communities. 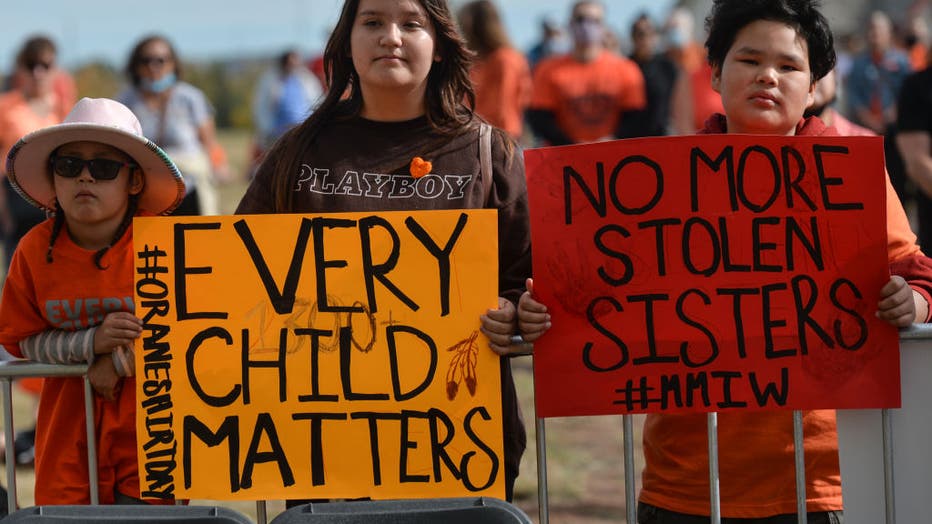 Young members of the First Nations hold placards with words 'Every Child Matter' and 'No More Stolern Sisters' during an outdoor ceremony at Fort Calgaryas, as the City of Calgary commemorates Orange Shirt Day, and observes the first National Day for

The conditions at boarding and residential schools varied across the U.S. and Canada. While some former students have reported positive experiences, children at the schools often were subject to military-style discipline.

James LaBelle Sr., who is Inupiaq, said he attended two federal boarding schools where he learned about European and American history and language, math and science but nothing about Indigenous cultures and traditions.

"I came out not knowing who I was," he said.

Deborah Parker, chief executive of the National Native American Boarding School Healing Coalition, tearfully recalled stories of a boarding school on the Tulalip reservation where she’s from that had a small jail cell and a basement where at least one girl routinely was chained to a heater and beaten. She said others hid to shield themselves from abuse.

"I am concerned when we begin to open these doors for our boarding school survivors to come forward and share their stories," she said. 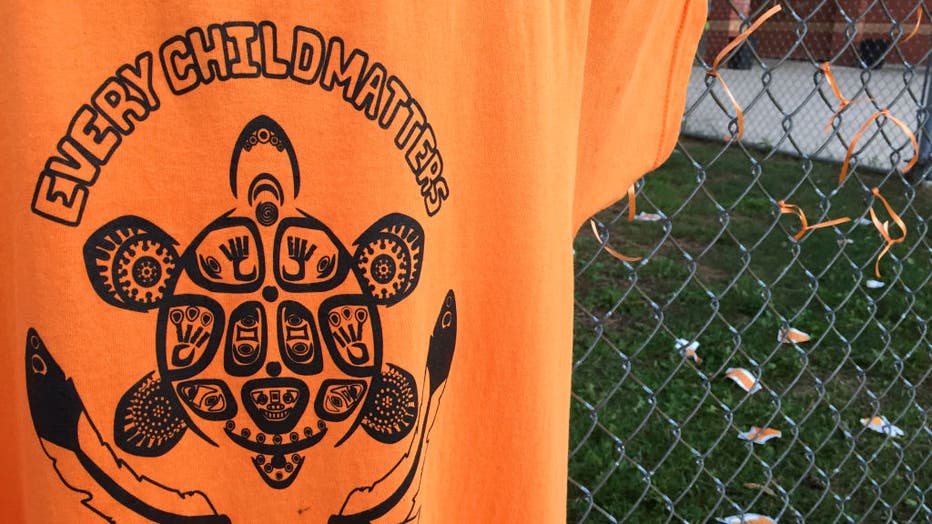 The boarding school coalition, which created an early inventory of the schools and shared its research with the Interior Department, praised Interior’s work but noted the agency’s scope is limited. The coalition has identified about 90 other boarding schools that fall outside of the federal government’s criteria.

A U.S. House subcommittee on Thursday will hear testimony on a bill to create a truth and healing commission modeled after one in Canada. Parker said it’s important in revealing a fuller truth about what happened to Native children.