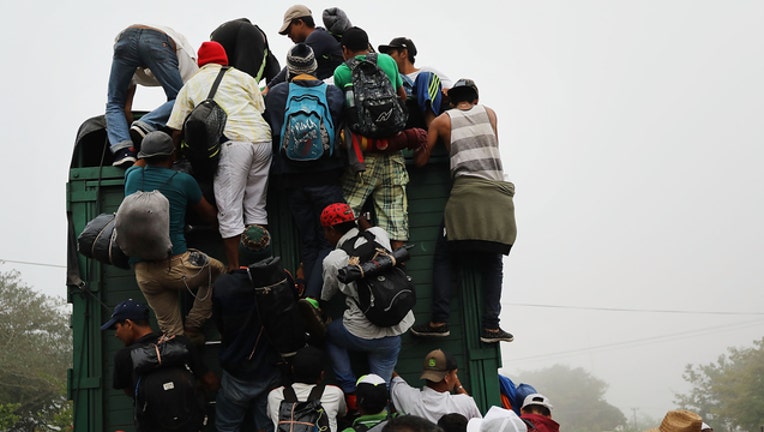 ISLA, MEXICO - NOVEMBER 04: Hundreds of members of the Central American migrant caravan move in the early hours toward their next destination on November 04, 2018 in Isla, Mexico. (Photo by Spencer Platt/Getty Images)

IXTLAN DEL RIO, Mexico (AP) - The U.S. government said it was starting work Tuesday to "harden" the border crossing from Tijuana, Mexico, to prepare for the arrival of a migrant caravan leapfrogging its way across western Mexico.

Customs and Border Protection announced it was closing four lanes at the busy San Ysidro and Otay Mesa ports of entry in San Diego, California.

It said the closures were needed "to install and pre-position port hardening infrastructure equipment in preparation for the migrant caravan and the potential safety and security risk that it could cause."

That still leaves a substantial path for the tens of thousands of people who cross daily: Twenty-three lanes remain open at San Ysidro and 12 at Otay Mesa.

A group of several hundred migrants moving ahead of the caravan made it to Tijuana on Tuesday aboard a fleet of buses.

The caravans became a campaign issue in U.S. midterm elections and U.S. President Donald Trump has ordered the deployment of over 5,000 military troops to the border to help fend off the migrants. Trump has insinuated without proof that there are criminals or even terrorists in the group.

To the thousands of Central American migrants making their way through Mexico's Pacific coast state of Nayarit, the prospect of meeting a hostile reception at the border is nothing new.

After a month on the road, through three countries, migrants like Maribel, 22, from La Ceiba, Honduras, are used to tough conditions.

Maribel, who did not want her last name used for fear of reprisals in Honduras, pushed a baby carriage with her 1-year-old daughter while her husband pushed another with their 3-year-old son along a highway leading from Guadalajara to the Nayarit state capital of Tepic. Few trucks passed, and migrants felt stranded.

"We are well aware of everything Trump has been saying," said Maribel. "Let them close whatever they want to close, but we are going to get through anyway."

About 1,300 migrants in a second caravan arrived in Mexico City, where they had their first day of rest in weeks Tuesday.

Roberto Hernandez, 39, a bricklayer from San Pedro Sula, Honduras, was finally able to get a shot of antibiotics for the fever he has had for two weeks. He was staying at the same tent shelters set up for the first caravan at a sports stadium in Mexico City.

"Ever since I left home I knew it wasn't going to be easy," said Hernandez, who sobbed quietly as he thought of the two sons, Mateo and Steven, he left at home. "They can put a million soldiers or whatever they want on the border, we are going to make the attempt to get across."

But things were especially tough for the first caravan. The estimated 6,000 Central Americans left shelters in Guadalajara early Tuesday and were taken by bus to a highway toll plaza to wait for rides to their next destination.

They thought other buses would be waiting for them to take them through hurricane-ravaged Nayarit to the neighboring state of Sinaloa, farther north. But no other buses showed up and few trucks passed to pick them up, leaving many to walk the 60 miles (90 kilometers) to the state line.

Maria Antonia Martinez, 40, of Ocotepeque trudged along with her 7-year-old daughter after failing to get a ride.

"They told it was five kilometers (three miles), and that wasn't true," Martinez said, after walking five hours in the burning sun along an empty highway.

Late Tuesday, hundreds were still stranded at the toll plaza and bedding down in its side lanes for the night. Those with better luck - the majority - made it as far as La Concha, in the Sinaloa state municipality of Escuinapa some 220 miles to the northwest.

The Rev. Miguel Angel Soto, director of the Casa de Migrante en Culiacan, said about 2,000 migrants had arrived in that area. He said the Sinaloa government, the Roman Catholic Church and Escuinapa officials were helping the migrants.

The priest also said the church had been able to get "good people" to provide buses for moving migrants northward. He said so far 24 buses had left Escuinapa on an eight-drive to Navojoa in Sonora state.

The first caravan appears intent on taking the Pacific coast route northward to the border city of Tijuana, which was still about 1,350 miles away. The migrants have come about 1,500 miles since they started out in Honduras around Oct. 13.

However, some small groups broke off along the way and went on ahead, either using buses, trains or long-haul truck rides to get to the border quicker. Small groups were reported in the northern cities of Saltillo and Monterrey, in the region near Texas.

The Tijuana city government said Tuesday that about 350 migrants had arrived and were receiving food before being sent to shelters around the city.

Jason M-B Wells, executive director of the San Ysidro Chamber of Commerce, said Tuesday in an email that the Tijuana Secretary of Economic Development and local businesses had identified 3,000 jobs for migrants who decide to stay.

Many say they are fleeing rampant poverty, gang violence and political instability primarily in the Central American countries of Honduras, Guatemala, El Salvador and Nicaragua.

Mexico has offered refuge, asylum or work visas, and its government said Monday that 2,697 temporary visas had been issued to individuals and families to cover them during the 45-day application process for more permanent status. Some 533 migrants had requested a voluntary return to their countries, the government reported.