The agency formerly advised testing for close contacts, even for those who are asymptomatic.

LOS ANGELES - As the U.S. attempts to stem the tide of the novel coronavirus pandemic, the count of Americans infected with COVID-19 surpassed 6 million as of Aug. 31, according to data from Johns Hopkins University. More than 183,000 Americans had died from the disease.

The U.S. sits right in the middle when it comes to COVID-19 mortality rates in the 20 nations most impacted by the pandemic, according to data from the Johns Hopkins University Coronavirus Resource Center.

Of the 20, Mexico has the highest mortality rate at 10.8 deaths for every 100 confirmed COVID cases, followed by Ecuador at 5.8. Saudi Arabia had the lowest rate of the 20 nations at 1.2, followed by Bangladesh, the Philippines, Russia, Morocco, India, Argentina, South Africa and Chile.

When the center looked at the data in another way, analyzing the COVID death rate for every 100,000 residents, the U.S. fares even worse. Only three nations — Brazil, Chile and Peru — posted higher death rates.

Understanding deaths as a percentage of the population or as a percentage of known infections is problematic because countries track and report COVID-19 deaths and cases differently. Many other factors are in play in shaping a death toll besides how well a country responded to the pandemic, such as the overall health or youth of national populations.

“The American public should feel cautiously optimistic here about what’s going on," Atlas said. "There is no need for fear at this point.”

He also downplayed the risk of infections in young people and agreed with DeSantis that college football needs to be played this year. Atlas described fit athletes as low-risk and said football “can be done safely” using social distancing in big stadiums.

Atlas also downplayed the need to test people for COVID-19 when they don’t have symptoms.

Atlas was hired earlier this month for the White House coronavirus task force amid ongoing tensions between the president and Dr. Anthony Fauci, the nation’s top infectious disease expert, and Deborah Birx, the task force's coordinator.

Atlas, the sole doctor to share the stage at Trump's pandemic briefings in early August, has long questioned polices that have been embraced by public health experts both in the U.S. and abroad. He has called it a “good thing” for younger, healthy people to be exposed to the virus, while falsely claiming children are at near “zero risk.”

In an April op-ed in The Hill newspaper, Atlas claimed that lockdowns may have prevented the development of “natural herd immunity.”

“In the absence of immunization, society needs circulation of the virus, assuming high-risk people can be isolated," he wrote.

In television appearances, Atlas has called on the nation to “get a grip" and argued that “there’s nothing wrong" with having low-risk people get infected, as long as the vulnerable are protected.

While the term “herd immunity” has spread in conversation about the novel coronavirus, evidence has emerged that the concept of immunity obtained through widespread infection of a population may not apply to COVID-19.

A study published on July 11 by researchers at King’s College London found that antibodies detected in the human body which fight the coronavirus declined after just a few weeks, leaving the possibility of herd immunity out of the question, according to researchers.

The implications of such a study engender the possibility that future waves of the novel coronavirus could return in seasons.

RELATED: In another blow to ‘herd immunity,’ study shows decline of COVID-19 antibodies after a few weeks

A separate nationwide population-based study published by researchers in Spain in July in the medical journal “The Lancet” found that despite the high impact of COVID-19 on the country, antibody “prevalence estimates remain low and are clearly insufficient to provide herd immunity.”

"These results emphasize the need for maintaining public health measures to avoid a new epidemic wave," the authors wrote. "Social distance measures and efforts to identify and isolate new cases and their contacts are imperative for future epidemic control."

Last week, the U.S. Centers for Disease Control and Prevention sparked a wave of confusion after posting guidelines that coronavirus testing is not necessary for people who have been in close contact with infected people.

The CDC previously had advised local health departments to test people who have been within 6 feet of an infected person for more than 15 minutes. But on Aug. 24, a CDC testing overview page was changed to say that testing is no longer recommended for symptom-less people who were in close contact situations.

There was a caveat, however. Testing may be recommended for those with health problems that make them more likely to suffer severe illness from an infection, or if their doctor or local state officials advise they get tested. 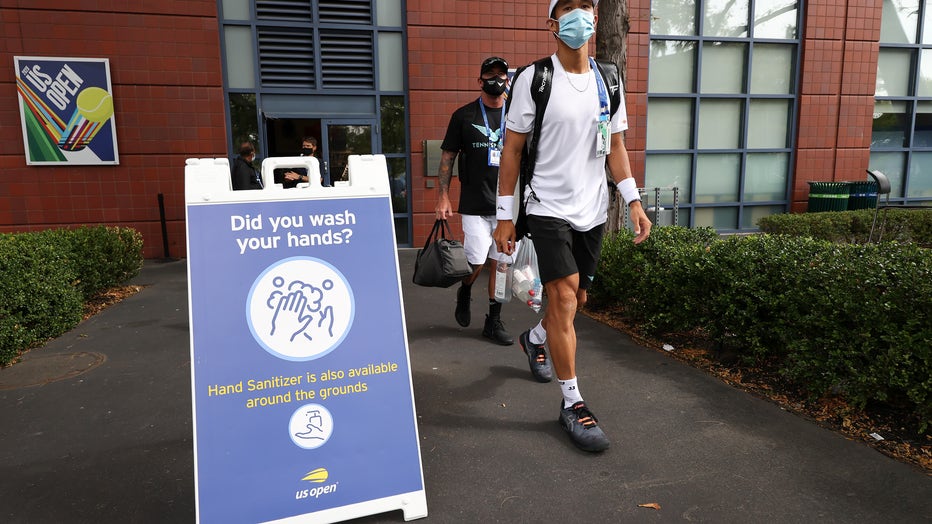 A tennis player wears a face covering as he walks the grounds on Day One of the 2020 US Open.

After Twitter lit up with head-scratching and alarm about the change, HHS officials sent an email Wednesday saying the guidance was revised “to reflect current evidence and the best public health interventions,” but did not detail what the new evidence was.

“I was taken aback and didn’t know that it was under consideration,” said John Auerbach, president of Trust for America’s Health, a nonprofit that works to improve U.S. preparedness against disease. “The recommendation not to test asymptomatic people who likely have been exposed is not in accord with the science.”