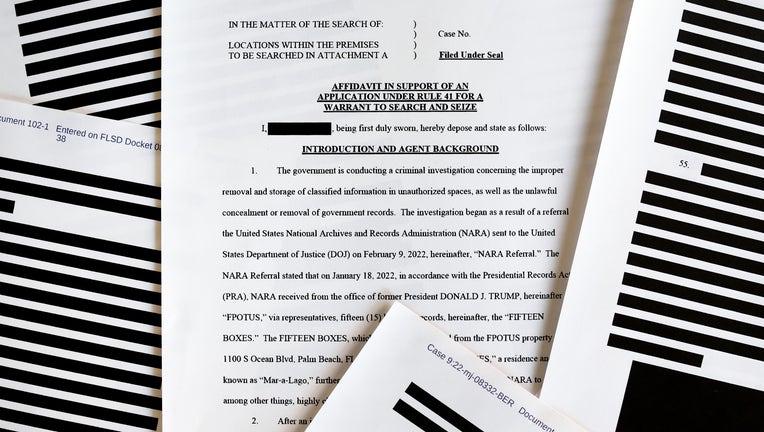 CALIFORNIA - AUGUST 27: In this photo illustration, pages are viewed from the government’s released version of the F.B.I. search warrant affidavit for former President Donald Trump's Mar-a-Lago estate on August 27, 2022 in California. The 32-page aff

WASHINGTON - The Justice Department and Donald Trump's legal team each proposed candidates Friday for the role of an independent arbiter in the investigation into top-secret documents found at the former president's Florida home, but the two sides differed on the scope of duties the person would have.

Lawyers for Trump said they believe the so-called special master should review all documents seized by the FBI during its search last month of Mar-a-Lago, including records with classification markings, and filter out any that may be protected by claims of executive privilege.

The Justice Department, by contrast, said it does not believe the arbiter should be permitted to inspect classified records or to take into account potential claims of executive privilege.

U.S. District Judge Aileen Cannon had given both sides until Friday to submit potential candidates for the role of a special master, as well as proposals for the scope of the person's duties and the schedule for his or her work.

The Justice Department submitted the names of two retired judges -- Barbara Jones, who served on the federal bench in Manhattan and has performed the same role in prior high-profile investigations, and Thomas Griffith, a former federal appeals court jurist in the District of Columbia.

The back-and-forth over the special master is playing out amid an FBI investigation into the retention of several hundred classified documents recovered from Mar-a-Lago within the past year. Though the legal wrangling is unlikely to have major long-term effects on the investigation or knock it significantly off course, it will almost certainly delay it by potentially months and has already caused the intelligence community to temporarily pause a national security risk assessment.

The Justice Department proposed an Oct. 17 deadline for the special master to complete the review process, while the Trump team said the work could take as long as three months.

Though both sides met Cannon's deadline to provide potential candidates, their filings made clear that they have core disagreements about the job of special master. That's not surprising given that the Justice Department had strenuously objected to the Trump team's desire for such an arbiter, and gave notice Thursday that it would appeal the judge's decision to grant the ex-president's request.

Central to the dispute is precisely what documents the yet-to-be-named special master should be tasked with reviewing. Roughly 11,000 documents -- including more than 100 with classified markings, some at the top-secret level -- were recovered during the FBI's Aug. 8 search. In granting the request for a special master, Cannon had directed the department to temporarily pause its use of the seized records for investigative purposes.

The Justice Department had said a special master was unnecessary in part because it had already completed its own review of the seized documents, locating a limited subset that possibly involve attorney-client privilege. It has maintained that executive privilege does not apply in this investigation because Trump, no longer president, had no right to claim the documents as his.

Though the government does not believe the special master should inspect documents with classification markings, the Trump team believes the arbiter should have access to the entire tranche of seized records. According to a summary of its position outlined in a filing Friday night, it disputes the idea that the Justice Department's "separation of these documents is inviolable" or that a document with classification markings is forever regarded as classified.

And the lawyers say that if any document is a presidential document, then Trump has an "absolute right of access to it."

"Thus, President Trump (and/or his designee) cannot be denied access to those documents, which in this matter gives legal authorization to the Special Master to engage in first-hand review," the filing states.

The two sides are also at odds over their proposed candidates, though three of the four are retired judges.

Jones, a retired Manhattan federal judge and one of the government's nominees, recently served as "special master" in two other high-profile cases related to the former president. She reviewed materials seized in FBI raids on Trump's one-time personal lawyers Michael Cohen, in an investigation related to hush-money payments, and Rudy Giuliani, in a probe of his dealings in Ukraine.

Griffith, the other Justice Department selection, was named to the federal appeals court in Washington in 2005 by then-president George W. Bush, and previously represented the institutional interests of the Republican-led Senate during the impeachment case against former President Bill Clinton.

The Trump team recommended Dearie, who was nominated in 1986 by then-President Ronald Reagan to the federal court based in Brooklyn and served until 2011. He has also served on the Foreign Intelligence Surveillance Court.

The other Trump pick, Huck, served as general counsel to Charlie Crist when Crist was the Republican governor of Florida. He is married to Barbara Lagoa, a judge on the 11th U.S. Circuit Court of Appeals, which would hear any appeal in the Trump case from Florida, and is listed on the Federalist Society website as a contributor to the influential conservative legal group.

The Justice Department on Thursday filed a notice of appeal indicating that it would contest the judge's special master order to the 11th U.S. Circuit Court of Appeals in Atlanta. It asked her to lift her hold on their investigative work pending their appeal.

The department has been investigating the unlawful retention of top-secret records at Mar-a-Lago after Trump left the White House as well as whether anyone sought to obstruct that probe. It is not clear if Trump or anyone else will be charged.
------
Associated Press writers Michael R. Sisak in New York and Curt Anderson in Miami contributed to this report.
More on Donald Trump-related investigations: https://apnews.com/hub/donald-trump