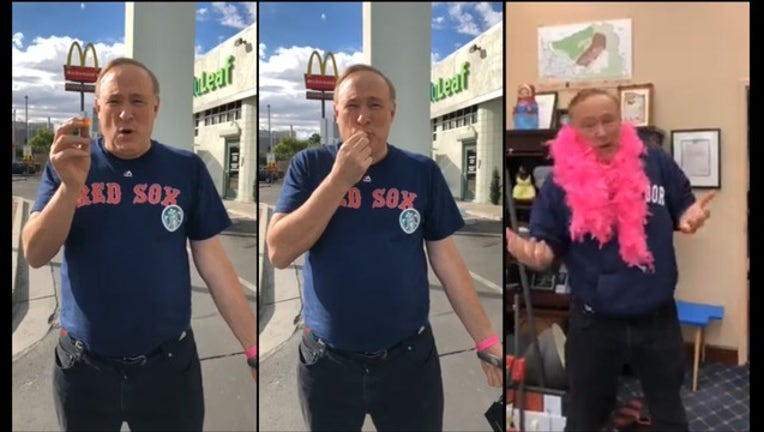 A Utah lawmaker, and self-described marijuana virgin, learned his colleagues plan to vote against a controversial cannabis act, so he made the trek to Las Vegas, ate his first cannabis gummy bear and now wants legislature to follow suit. And he’s totally serious.

Democratic state Sen. Jim Dabakis held the tasting session on Facebook live weeks ahead of the revision to Prop 2, which will decide how weed can be ingested, where and how it’s sold and what kinds of conditions qualify for a medical cannabis card in Utah. He said at least one senator should try it before they debate the measure.

“Everybody, mellow out, recognize that this is nothing to be afraid of,” Dabakis said in the video posted 24 hours after his unforgettable cannabis test-drive. “Because the people who are terrified by it seem to be the people who HAVE NEVER TRIED IT.”

Standing in the parking lot of a dispensary called NuLeaf, Dabakis struggled with the packaging before eventually splitting the gummy in half and opting for a cautionary lick-test before eating it. He was sure no lawmaker had used marijuana prior to this plunge, so the senator decided he’d make the “great sacrifice.” Well, he made it through the experience unscathed after eating the other half and then eating the another half and then going to Cirque Du Soleil, according to Vice.

“I wouldn’t suggest shooting up marijuana to anybody, but I’ll tell you, it’s a lot of ho-hum,” said the (former) marijuana virgin. “I think the reefer madness crowd, you guys, you need to try it. It’s not that big of a deal.”

Moments later, the senator got specific and proposed that everyone in Utah’s legislature “go try gummy bears.” He added maybe they can pass a one-day law for a “special session and do it in the capitol with nurses around and doctors.”

A vast majority of Utah’s Senate is Mormon, Dabakis said, noting the Mormon church has been openly opposed to medical marijuana. But Dabakis swerved right past this obstruction with a dependable plan that that excuses conflicting religious beliefs, citing the experiment as “informational.”

“Make no mistake, anti-reefer madness people are in total control now, and they’re going to re-write what the people have, so having said all that I’m just saying: ‘It’s no big deal,’” he said, adding that taxpayer’s money was not used to purchase the $30 edible.

There was no “ahhhh moment” as the senator described it. He was just mellow. And maybe him not dying will do nothing for the proposition. But the videos, which collectively have over 400,000 views, garnered support from some of the public, if nothing else.

“I will pay for all the edibles to give to each member of Utah’s legislature!” a Facebook user wrote in the comment section. Another called him “a true hero to the people of Utah.”