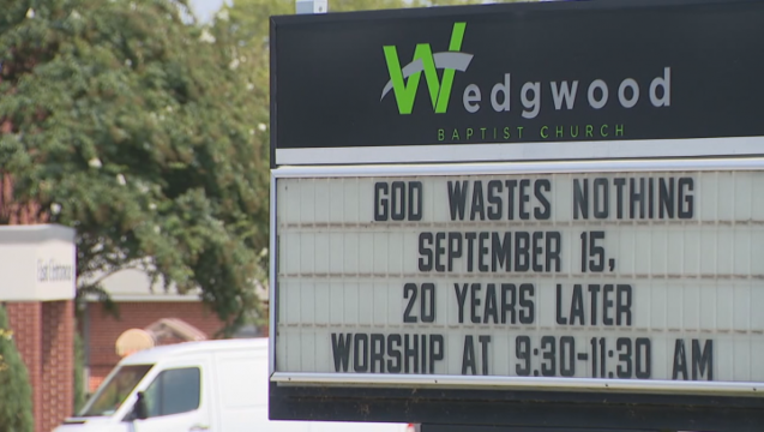 FORT WORTH, Texas - Sunday marked the 20-year anniversary of the tragic event at Wedgwood Baptist Church, when a gunman went on a bloody rampage, shooting and setting off a pipe bomb, killing seven people and wounding seven more, before killing himself.

Decades later, the message at Wedgwood Baptist Church remains the same: God wastes nothing. Those seven people did not die in vain.

"He was in control. He wastes nothing. And please note this: I'm not saying, nor does Christianity, nor does the Bible say all things are good," Wedgwood Baptist Church Senior Pastor Dr. Al Meredith said. "These are bad things, but God can turn those bad things together for our good."

Tralissa Griffin was at the church that day back in 1999 with her daughter, 14-year-old Cassie Griffin, along with hundreds of other teens attending a prayer rally when the shooter came in, as she says, like a dark figure, completely enraged.

Sunday, at the anniversary service, she recalled what the medical examiner told her after, that her daughter wouldn't have seen the bullet coming. That she went from praising God in the sanctuary, to praising God in heaven.

"Look for the ways that God is reaching out to you on a daily basis. He wants to draw you to him. He has a way to provide you strength. Because in this world, we do have trouble, but he has overcome the world," Griffin said.

She shared that it was in the depths of those days that she felt closest to the Lord.

"There is going to be sadness, but that's what reminds us that this world is not our home," Rogers said. "And you know, if we didn't go to the depths, we wouldn't recognize the heights of how God helped us."

Sunday's sermon centered on the verse in Romans 8:28, which says, "all things work together for good."

Victim Cassie Griffin's father, David Griffin, shared a vision he had of his daughter.

It's how he now remembers her, 20 years later, forever as a teenage girl, in heaven without fear and without suffering.

"I saw Cassie in the midst of the crowd with her hands held high, worshipping Jesus," Griffin said.

"We know God. God causes all things to work together for good," Dr. Meredith said.