One fan was caught on camera running onto the field during Game 2 of the ALCS. He was taken off the field by security.

HOUSTON - A fan was led away by police after running onto the field at Minute Maid Park during the second game of the American League Championship Series.

As the ninth inning was beginning on Thursday night, a man tried to get up close and personal with Houston Astros second baseman Jose Altuve. 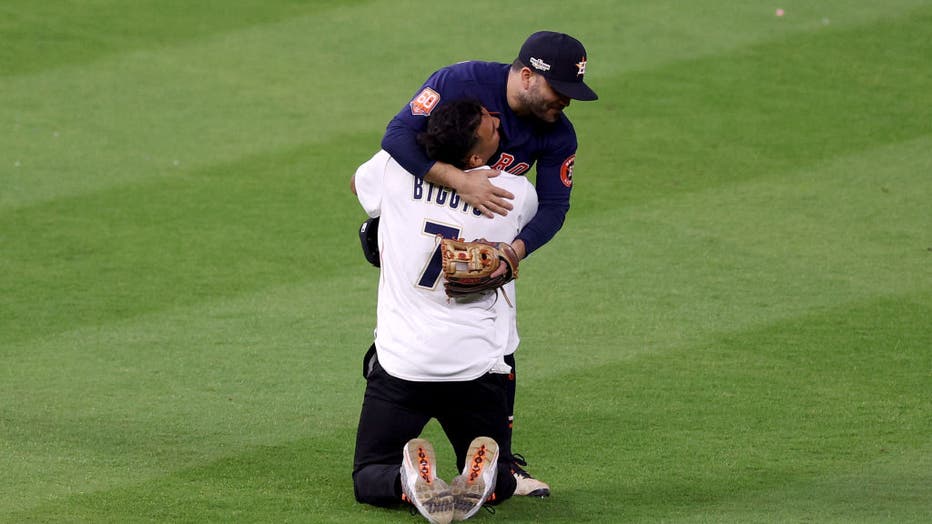 HOUSTON, TEXAS - OCTOBER 20: A fan enters the field and greets Jose Altuve #27 of the Houston Astros during the ninth inning in game two of the American League Championship Series against the New York Yankees at Minute Maid Park on October 20, 2022 i

Altuve says he saw the man who ran up to him was wearing an Astros jersey and thought he would be fine.

"He just said ‘we need to win, I spent all of my money on the ticket’. And I was trying to tell him, just, you know, we’re trying to win," Altuve says. "We were about to take a selfie, but then security guys got there and did their job."

Photos and videos show the man hugging Altuve before security got him onto the ground. Police officers also helped escort him off of the field.

The Astros ended up beating the New York Yankees 3-2 to take a 2-0 lead in the best-of-seven series. The next game will be at Yankee Stadium on Saturday.