Irving police are searching for the man who opened fire inside the Irving Mall on Sunday. They released disturbing video that shows him set down an infant car seat to pull out a gun.

IRVING, Texas - Surveillance video shows the gunfire and moments leading up to a shooting inside the Irving Mall over the weekend. The man seen firing the gun was carrying a child’s car seat and set it down to open fire.

Irving police said roughly 300 people were inside the mall around 4 p.m. Sunday when the shots were fired in the food court.

The video shows the shooter wearing a black shirt. He appears to be carrying a shopping bag in one hand and a child’s car seat in his other hand.

A man in a light-colored shirt walks through a door and appears to take a swing at the shooter. That’s when the shooter pulls out a gun and fires at the other man at close range.

RELATED: Shooting at Irving Mall being investigated by police 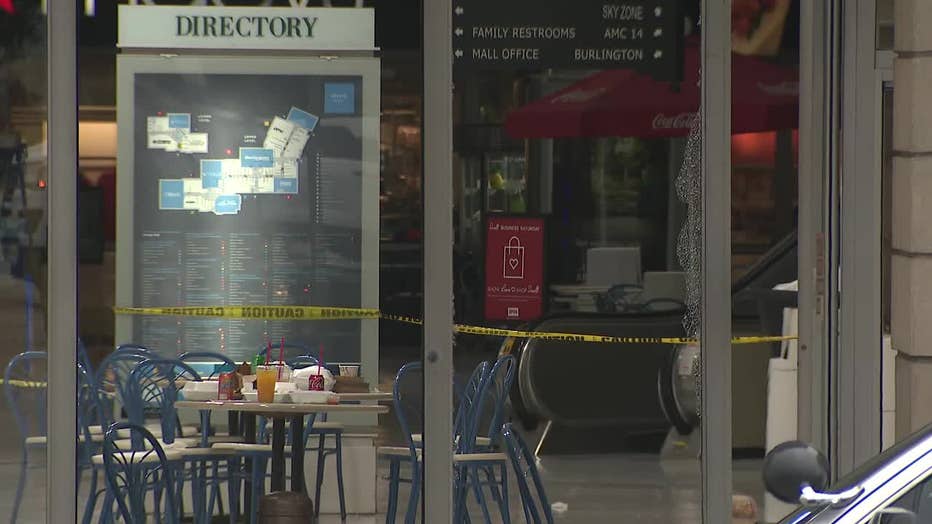 "There was just a bunch of arguing and we heard gunshots," said Olivia Wilson, who was at the mall at the time to get a tattoo. "And then we just kind of went to the back of the store or shop and just hid there until police got there."

Irving police said no one was hurt, including the man the shooter was targeting. They evacuated the mall and recovered shell casings as evidence.

"We have been in contact with that victim. That victim is not being very cooperative. But we do know that the victim and the suspect knew each other," said Officer Robert Reeves, a spokesman for the Irving Police Department.

The mall reopened for the holiday, but the south entrance near the food court remains closed.

The glass door that was shattered during the shooting is now boarded up.

And while police said the shooting was targeted, it was still a scary situation for shoppers.

"Just the fact that anybody may be hearing gunshots while they are trying to shop or enjoy a movie with their family and friends is alarming," Reeves said.

"Kinda surprised. Nothing crazy ever happens here in this area," said Ken Haymang, a member of the Fitness Connection gym near the mall. "It’s normally pretty quiet. Everybody goes to the mall or comes to the gym.

Wilson returned to the mall Monday to get the tattoo she'd been looking forward to.  She said she was glad she wasn't in the area when it happened.