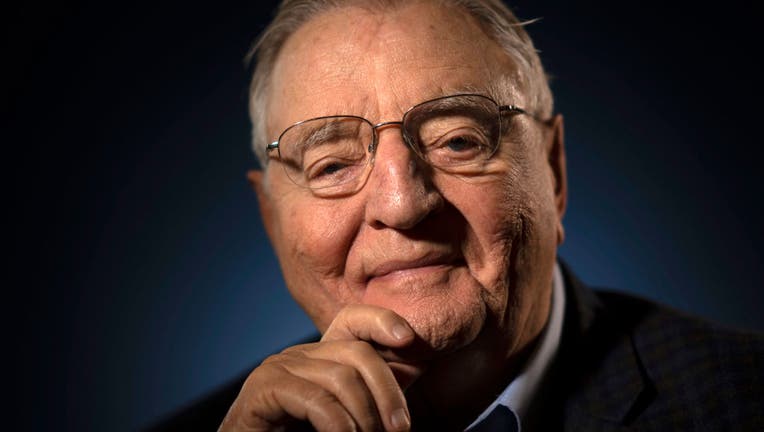 MINNEAPOLIS (FOX 9) - Walter Mondale passed away in Minneapolis Monday at the age of 93, his family says.

The Minnesotan’s long career in politics was highlighted by serving as Jimmy Carter’s Vice President. He also served as Minnesota’s Attorney General, U.S. Senator and the U.S. Ambassador to Japan.

Walter Mondale was the elder statesman of Minnesota politics and the reactions to his death Monday showed that he was a mentor to many who changed the vice presidency forever.

Former Mondale staff members received an email he crafted for them in the event of his death, according to the Minnesota DFL. In it he praised their work, saying, "Never has a public servant had a better group of people working at their side."

To close, he said, "I always knew it would be okay if I arrived some place and was greeted by one of you!"

He signed the letter with his nickname, "Fritz."

From Ceylon to the White House

Mondale was born in Ceylon, Minnesota in January 1928. His parents were Norwegian immigrants. His father was a Methodist minister and his mother was a piano teacher. A high school football star in high school, Mondale attended Macalaster College in St. Paul for two years before transferring to the University of Minnesota.

He served in the U.S. Army and enrolled at the University of Minnesota's law school on the G.I. Bill upon his return. He served as a law clerk on the Minnesota Supreme Court after law school before practicing law in Minneapolis.

He was active in DFL politics and saw Hubert Humphrey and Orville Freeman as his mentors. He eventually filled Humphrey's Senate seat after being appointed as Minnesota Attorney General. He won re-election to his Senate seat in 1966 and 1972.

Among his major accomplishments in the Senate was his championing of the Fair Housing Act of 1968, which banned discrimination in housing based on race, religion, national origin or sex. He also played a large role in passing the Wild and Scenic Rivers Act of 1968, which helped preserve the St. Croix River.

Mondale was nominated as the Democratic candidate for President four years later and chose the first woman to run for either President or Vice President, Geraldine Ferraro. They were defeated by Ronald Reagan and George H.W. Bush, at which time Mondale returned to private life.

Walter Mondale passed away in Minneapolis Monday at the age of 93, his family says.

Common among statements that poured in after Mondale's death was announced is the fact that many saw him as a mentor.

Sen. Amy Klobuchar said Mondale was a "true public servant," and "my friend and mentor."

Klobuchar said she interned in Mondale's office as a college student, which she called "life-changing." She said she left that job thinking she could see herself run for office someday.

"Walter Mondale taught me that leadership isn’t all about giving soaring speeches and punchy sound bites – but actually getting things done for people. He always saw his responsibility as an elected leader as bigger than the immediate challenge at any given moment. His broader mission was helping to prepare a new generation of leaders for the next big decision that needed to be made," Klobuchar added in her statement.

President Jimmy Carter, in a statement released through the Carter Center, said Mondale was the "best vice president in our country's history." He credited Mondale with transforming the vice presidency during his time at the helm.

"Fritz Mondale provided us all with a model for public service and private behavior," Carter said.

President Joe Biden and First Lady Jill Biden released a statement Monday night saying they had the chance to talk to Mondale over the weekend to reflect on "the years of friendship we shared, and how much we learned from and leaned on each other."

Biden said Mondale was one of the first people to greet him when he arrived in the Senate and said "Fritz" was his first call when Obama asked him to be vice president.

In a statement of her own, Vice President Harris said Mondale re-definied the president-vice president relationship "as a true partnership." She also commended his "bold and historic" choice to select Ferraro as his running mate.

"Each time I open my desk drawer and see his signature there, alongside the signatures of 11 other Vice Presidents, I will be reminded of and grateful for Vice President Mondale's life of service," Harris said.

Sen. Tina Smith tweeted that she loved the former Senator.

"Mondale was a giant not only because of the positions he held…but because of the work that he did," she said in a tweet Monday after learning of his passing.

She called him a "true friend," and described him as "lively", "incisive" and "hysterically funny."

Gov. Tim Walz tweeted a statement Monday night, saying he and his wife were mourning the loss of "a dear friend and mentor."

"We will miss terribly Fritz Mondale, the steady voice and vision setter for ideas great and small, people powerful and powerless, and justice waiting to be revealed," Walz added.

Attorney General Keith Ellison called Mondale "the original People's lawyer" and said he was a "towering figure in American civil rights, a transformative Vice President and an iconic Minnesotan."

Rep. Dean Phillips called Mondale "one of our finest statesmen from the greatest generation," and a mentor.

Rep. Ilhan Omar said Mondale was a "giant in Minnesota politics" and was a "vocal advocate for progressive values."

The Minnesota DFL Party, in its statement, said "Minnesota has lost our North Star."

"Former Vice President Walter Mondale was a moral, courageous, and principled leader whose tireless work to improve the lives of his fellow Americans and people across the globe has left an indelible mark on history," said DFL Chairman Ken Martin, in a statement.

Minneapolis Mayor Jacob Frey called Mondale "one of Minneapolis' most industrious residents" in a statement that praised his "courage and compassion."

Mondale’s family says he is survived by sons Ted and William; grandchildren Louis, Amanda, Berit and Charlotte Mondale, and Cassandra and Danielle Miller; daughter-in-law Rebecca Mondale and son-in-law Chan Poling. He married his late wife Joan Adams in 1955. She passed away in 2014.

The Mondale family says memorials in both Minnesota and Washington, D.C. will be announced at a later date.