Liz Cheney speaks on U.S. House floor ahead of leadership vote tomorrow; " I will not sit back and watch in silence"

It’s all but certain that tomorrow House Republicans will strip Rep. Liz Cheney of her number-three GOP leadership position – but Cheney faces another major headache back home in Wyoming, as Republicans are plotting to oust her as the state’s lone representative in Congress when she’s up for re-election next year. Cheney, the most high profile of the 10 House Republicans to vote in January to impeach then-President Trump for inciting the deadly insurrection at the U.S. Capitol by right-wing extremists, is facing primary challenges from an increasing number of GOP candidates. That, however, might be Cheney’s saving grace: A crowded field likely divides the anti-Cheney and pro-Trump vote.

WASHINGTON - Rep. Liz Cheney, R-Wyo., who seems all but certain to be tossed from her No. 3 House GOP job after repeatedly challenging former President Donald Trump’s false assertions of fraud in his 2020 reelection defeat, struck a defiant tone on Tuesday when speaking ahead of the expected vote to remove her.

"We must speak the truth. Our election was not stolen. And America has not failed," Cheney said on the House floor.

"I will not sit back and watch in silence while others lead our party down a path that abandons the rule of law and joins the former president's crusade to undermine our democracy," Cheney added.

A vote to remove Cheney from her Republican leadership post in the chamber has been set for Wednesday by House Minority Leader Kevin McCarthy.

McCarthy has signaled his desire to remove Cheney for several weeks. His Monday note, which mentioned neither her nor Trump by name, seemed designed to provide whatever cover wavering GOP lawmakers might need to toss Cheney from her position.

"If we are to succeed in stopping the radical Democratic agenda from destroying our country, these internal conflicts need to be resolved so as to not detract from the efforts of our collective team," McCarthy wrote. "Having heard from so many of you in recent days, it’s clear that we need to make a change. As such, you should anticipate a vote on recalling the Conference Chair this Wednesday."

The political coup against Cheney underscores the lasting allegiance many top Republican lawmakers have for former president Trump. 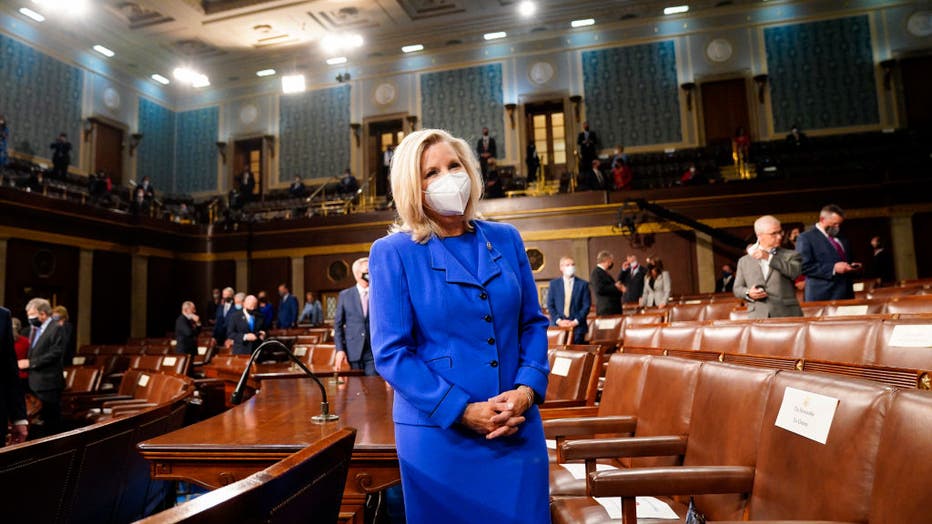 Representative Liz Cheney (R-WY) waits for the arrival of President Joe Biden, before he addresses a joint session of Congress at the US Capitol in Washington, DC, on April 28, 2021.

This despite his role in inciting the Capitol riot and his recitation of baseless claims of election fraud.

Despite there being a high chance of Cheney’s removal, a modest number of Republicans have spoken out in Cheney's defense.

"This is leadership. This is integrity. This is Liz Cheney," tweeted Republican Rep. Adam Kinzinger.

"Cancel culture is cancel culture, no matter how you look at it," Sen. Joni Ernst, R-Iowa, told reporters Monday. "And unfortunately I think there are those that are trying to silence others in the party."

Cheney’s job as chair of the House Republican conference includes formulating the party’s messaging. Rep. Elise Stefanik, R-N.Y., an early Trump critic who has embraced him over the past two years, seems likely to replace her, though McCarthy might delay that second vote.

Trump reiterated his support for Stefanik in a statement Monday. He cited her support from the National Rifle Association and the union representing border patrol agents, plus her efforts to help Republicans win House seats, adding, "She knows how to win, which is what we need!"

Cheney is a daughter of former Vice President Dick Cheney and a product of the GOP's conservative establishment. She has a more conservative voting record than Stefanik, according to ratings by conservative groups, but Cheney's willingness to call out Trump has turned Republicans from all portions of the GOP spectrum against her.