Microplastics are pieces of plastic that measure less than 5 millimeters and these tiny particles are finding their way into our drinking water, food, and even our blood.

Wegmans announced on Thursday it will completely eliminate the use of plastic bags at all of its groceries stores by the end of 2022, hoping to combat pollution caused by plastic waste.

"We understand shoppers are accustomed to receiving plastic bags at checkout and losing that option requires a significant change. We are here to help our customers with this transition as we focus on doing what’s right for the environment," said Jason Wadsworth, Wegman's category merchant for packaging, energy, and sustainability. "As we’ve encountered plastic bag legislation in numerous markets, we’ve learned there’s more we can do, and a bigger impact we can make, together with our customers."

The grocery chain will incentivize customers to use reusable bags by charging 5 cents per paper bag, "an approach that has proven successful in New York and other markets," the company said in a news release.

In 2020, Wegmans started charging for plastic bags in New York to push shoppers toward reusable options.

In stores that already eliminated plastic bags, an average of 20-25% of customers used paper bags provided by the store and the remaining 75-80% brought their own reusable bags or did not use a bag at all for their groceries, according to the company.

"By eliminating plastic bags from the rest of our stores and focusing on transitioning our customers to reusable bags, we’re preventing approximately 345,000,000 single-use bags from going into circulation in a year’s time," Wegmans said.

Whatever revenue Wegmans collects from paper-bag charges will be donated to each store’s local food bank and United Way.

"In 2021, the more than $1.7 million Wegmans collected and donated from the bag charge was used to increase access to wholesome food and address the most critical needs of our communities," the company added. 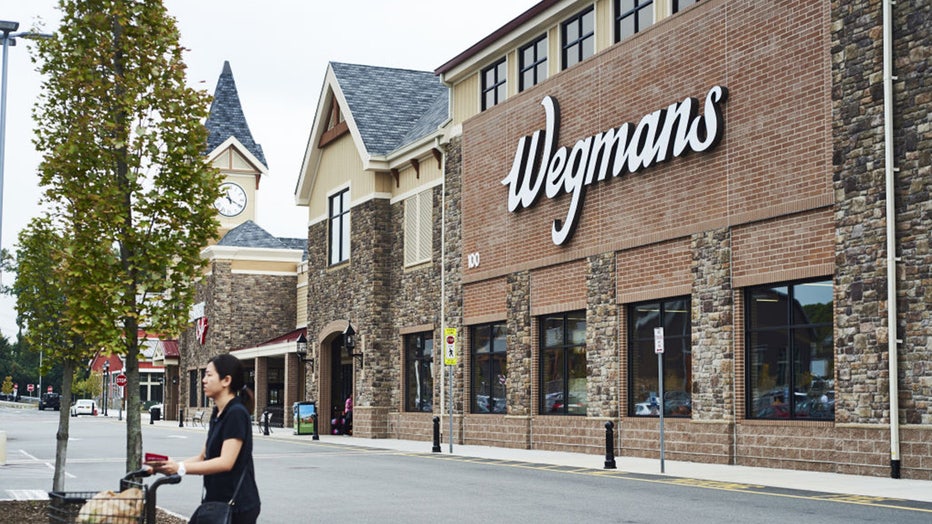 FILE - A customer pushes a shopping cart outside of a Wegmans Food Markets Inc. supermarket in in Montvale, New Jersey, U.S., on Tuesday, Oct. 2, 2018.

According to a report by the BBC, nearly 80 million tons of plastic packaging are produced worldwide each year. And the Marine Pollution Bulletin in a study estimated that plastic waste costs around $33,000 per ton in related environmental expenditures.

Wegmans isn’t the only store to eliminate single-use plastics. According to the National Conference of State Legislatures, California, Connecticut, Delaware, Hawaii, Maine, Oregon, and Vermont have levied bans as well, impacting big-box chains there.

FOX Business contributed to this report. This story was reported out of Los Angeles.