Speaking in West Palm on Wednesday, Nov. 3, Florida Gov. Ron DeSantis refers to the Biden Administration as the ‘Brandon Administration.’ As the crowd chants 'Let's go, Brandon,' the governor explains his version of the origins of the phrase.

When Republican Rep. Bill Posey of Florida ended an Oct. 21 House floor speech with a fist pump and the phrase "Let’s go, Brandon!" it may have seemed cryptic and weird to many who were listening. But the phrase was already growing in right-wing circles, and now the seemingly upbeat sentiment -- actually a stand-in for swearing at Joe Biden -- is everywhere.

The line has become conservative code for something far more vulgar: "F--- Joe Biden." It’s all the rage among Republicans wanting to prove their conservative credentials, a not-so-secret handshake that signals they’re in sync with the party’s base.

Americans are accustomed to their leaders being publicly jeered, and former President Donald Trump’s often-coarse language seemed to expand the boundaries of what counts as normal political speech.

But how did Republicans settle on the Brandon phrase as a G-rated substitute for its more vulgar three-word cousin?

It started at an Oct. 2 NASCAR race at the Talladega Superspeedway in Alabama. Brandon Brown, a 28-year-old driver, had won his first Xfinity Series and was being interviewed by an NBC Sports reporter. The crowd behind him was chanting something at first difficult to make out. The reporter suggested they were chanting "Let’s go, Brandon" to cheer the driver. But it became increasingly clear they were saying: "F--- Joe Biden."

NASCAR and NBC have since taken steps to limit "ambient crowd noise" during interviews, but it was too late — the phrase already had taken off.

After a heckler interrupted Gov. DeSantis, others in the crowd respond with chants of 'Let's go Brandon' and ‘We love Casey’ as deputies remove the man.

When the president visited a construction site in suburban Chicago a few weeks ago to promote his vaccinate-or-test mandate, protesters deployed both three-word phrases. This past week, Biden’s motorcade was driving past a "Let’s Go Brandon" banner as the president passed through Plainfield, New Jersey.

And a group chanted "Let’s go, Brandon" outside a Virginia park when Biden made an appearance on behalf of the Democratic candidate for governor, Terry McAuliffe. Two protesters dropped the euphemism entirely, holding up hand-drawn signs with the profanity.

On a recent Southwest flight from Houston to Albuquerque, the pilot signed off his greeting over the public address system with the phrase, to audible gasps from some passengers. Southwest said in a statement that the airline "takes pride in providing a welcoming, comfortable, and respectful environment" and that "behavior from any individual that is divisive or offensive is not condoned."

Veteran GOP ad maker Jim Innocenzi had no qualms about the coded crudity, calling it "hilarious."

"Unless you are living in a cave, you know what it means," he said. "But it’s done with a little bit of a class. And if you object and are taking it too seriously, go away." 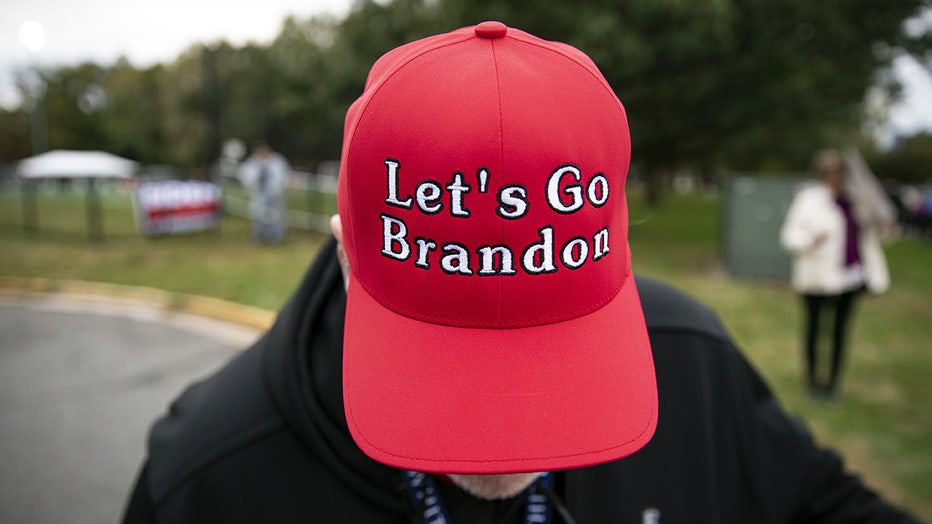 A history of insult and outrage

America’s presidents have endured meanness for centuries; Grover Cleveland faced chants of "Ma, Ma Where’s my Pa?" in the 1880s over rumors he’d fathered an illegitimate child. Thomas Jefferson and Andrew Jackson were the subject of poems that leaned into racist tropes and allegations of bigamy.

"We have a sense of the dignity of the office of president that has consistently been violated to our horror over the course of American history," said Cal Jillson, a politics expert and professor in the political science department at Southern Methodist University. "We never fail to be horrified by some new outrage."

There were plenty of old outrages.

"F--- Trump" graffiti still marks many an overpass in Washington, D.C. George W. Bush had a shoe thrown in his face. Bill Clinton was criticized with such fervor that his most vocal critics were labeled the "Clinton crazies."

The biggest difference, though, between the sentiments hurled at the Grover Clevelands of yore and modern politicians is the amplification they get on social media.

"Before the expansion of social media a few years ago, there wasn’t an easily accessible public forum to shout your nastiest and darkest public opinions," said Matthew Delmont, a history professor at Dartmouth College.

Even the racism and vitriol to which former President Barack Obama was subjected was tempered in part because Twitter was relatively new. There was no TikTok. As for Facebook, leaked company documents have recently revealed how the platform increasingly ignored hate speech and misinformation and allowed it to proliferate. 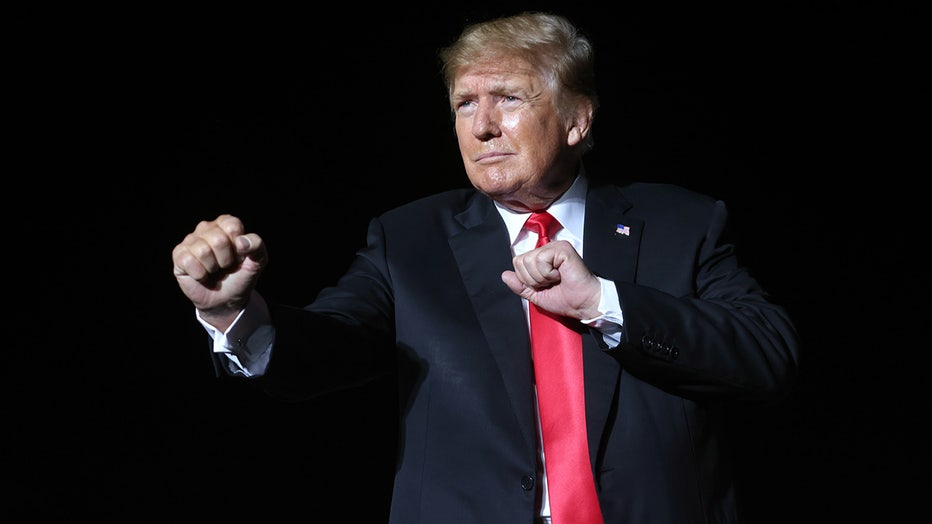 Former President Donald Trump speaks to supporters during a rally at the Iowa State Fairgrounds on October 09, 2021 in Des Moines, Iowa. This is Trump's first rally in Iowa since the 2020 election. (Photo by Scott Olson/Getty Images)

A portion of the U.S. was already angry well before the Brandon moment, believing the 2020 presidential election was rigged despite a mountain of evidence to the contrary, which has stood the test of recounts and court cases.

But anger has now moved beyond die-hard Trump supporters, said Stanley Renshon, a political scientist and psychoanalyst at the City University of New York.

He cited the Afghanistan withdrawal, the southern border situation and rancorous school board debates as situations in which increasing numbers who were not vocally anti-Biden now feel that "how American institutions are telling the American public what they clearly see and understand to be true, is in fact not true."

Trump hasn’t missed the moment. His Save America PAC now sells a $45 T-shirt featuring "Let’s go Brandon" above an American flag. One message to supporters reads, "#FJB or LET’S GO BRANDON? Either way, President Trump wants YOU to have our ICONIC new shirt."

Separately, T-shirts are popping up in storefronts with the slogan and the NASCAR logo.

And as for the real Brandon, things haven’t been so great. He drives for a short-staffed, underfunded team owned by his father. And while that win — his first career victory — was huge for him, the team has long struggled for sponsorship and existing partners have not been marketing the driver since the slogan.