Formula 1 is once again back in Austin. FOX 7 Austin's Tierra Neubaum gets details about what's going on at Circuit of the Americas from one of the drivers.

AUSTIN, Texas - Get ready for a weekend of high-class racing, concerts, and culinary experiences at the Circuit of the Americas as the F1 United States Grand Prix is back in town October 22-24.

This is the ninth year the race is being held in Austin.

Last year's race was canceled so 2019 winner Valtteri Bottas is the defending champion. Bottas currently sits third in the F1 driver standings behind teammate Lewis Hamilton, who has won five times at COTA, and leader Max Verstappen. Experts expect a tense battle through the final lap of the race.

In addition to watching their favorite F1 drivers take the 3.4-mile track, fans can catch the W Series international motor racing championship for female drivers. The double-header will take place on October 23 and 24 and this will be the first W Series event to be staged outside of Europe.

Alice Powell and Jamie Chadwick arrive at COTA tied for the championship lead, so the 2021 title will be decided in Austin in what's expected to be a dramatic conclusion to the 2021 W series season.

There are tickets still available. To purchase and to get more details you can go here.

Besides the action on the track, there's a lot of other things happening at COTA for the event. Below is a list of some of the things to check out and information on how to get out to enjoy all the fun.

HOW TO GET THERE

With more than 360,000 attendees expected over race weekend, planning transportation to and from COTA is very important. Because parking is sold out and rideshare users will experience extended wait times and surge pricing, Circuit of The Americas is urging fans attending the race to utilize shuttle buses if they don’t already have a parking pass.

Tickets for the buses start at $15 and are on sale now online or on-site at each shuttle pickup location in Austin.

There are two types of shuttles available. The Front Gate Shuttle, available Friday-Sunday, will pick up at two points, Downtown (San Jacinto Blvd / East 14th St.) and at Barton Creek Mall and drop guests at the entrance of the Grand Plaza. The Drop & Walk Shuttle, available Saturday-Sunday, will pick race fans up at the Bastrop Memorial Stadium, Guadalupe/51st St, and ABIA Arrivals (Airport) and drop them off in the McAngus Lot, which is approximately a 15-minute walk to the Grand Plaza.

Formula 1 returns to Circuit of the Americas

There's so much to see and do at COTA beyond the racing on the track. FOX 7 Austin's Tierra Neubaum gets details about the event and also important information on how to get there.

Race fans who purchase a shuttle ticket and ride the shuttle will be eligible to win (2) trackside premium tickets to The Rolling Stones concert on November 20 at COTA’s Super Stage. The winner will be chosen at random after Formula 1 weekend.

Also on October 24, DJ DIESEL, the DJ name of former NBA star Shaquille O'Neal, will be performing a curated set at 4:30 p.m. (CT).

It's not just racing on the track and music that you can enjoy at COTA. FOX 7 Austin's Tierra Neubaum has more on some of the food you can get while out at the event.

The COTA Culinary Experience is new this year and will feature five unique food villages, each offering an incredible mix of the very best food found in Austin. Race fans from all over the world can take a food tour through Texas with each restaurant offering 2-3 menu items for guests.

The different villages and participating restaurants are as follows:

Rodeo Driveway is located at the Main Grandstand and is a Beverly Hills-inspired sidewalk café with an upscale Austin vibe featuring some of the best chefs Austin has to offer.

La Cantina features Austin’s famous South of the Border-inspired flavors where fans can sip on margaritas and enjoy classic Tex-Mex dishes with a fiesta ambiance.

Lone Star Land is where all things Texas reign supreme at one of the busiest entrances to the track. With Texas BBQ, country music, cowboy hats & boots, and smokin’ pits aplenty, fans from near and far can celebrate some of Texas’ favorite fares.

Taste of Texas is inspired by chef-driven food festivals, live music, and picnic culture and it will feature gourmet grab & go and favorite local eateries.

"We’ve gathered the best of the best in Texas eats," said Courtney Young, Managing Director of Events and Hospitality at COTA, said in a news release. "With Formula 1 hosting race fans from all over the world, we want to put our best foot forward and really showcase what Austin has to offer. Whether guests are long-time Austin residents or visiting from another part of the world, there will be something for everyone during the COTA Culinary Experience."

Top-ranked Major League Eaters will face off during the SPAMARAMA World SPAM-Eating Championship on Saturday, October 23 at 6:30 p.m. Eaters will have eight minutes to consume as much SPAM as they can, competing for $5,000 in prizes.

The current world record in the SPAM-eating discipline was set on April 3, 2004, by Richard "the Locust" LeFevre, who consumed six pounds in 12 minutes.

We are pleased to be back at Circuit of the Americas with leading competitors from across the nation," said Sam Barclay of Major League Eating in a news release. "We are on the threshold of a universe in which a new SPAM-eating record distinguishes our species."

Geoffrey Esper, the #2-ranked competitive eater in the world, will face fierce competition as he takes on fellow eater, #5-ranked Miki Sudo from Tampa, FL;  #6-ranked Nick Wehry from Tampa, FL, and more.

OTHER THINGS TO SEE 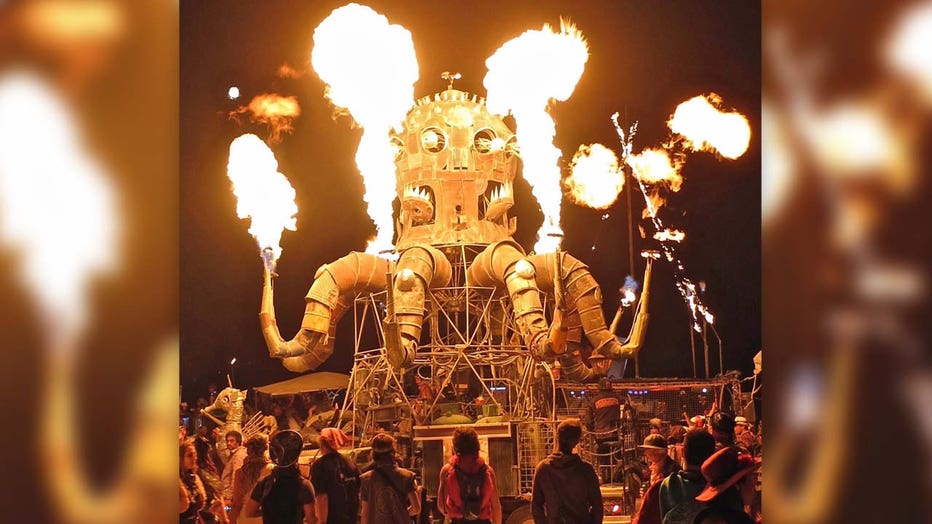 COTA has also added a new bridge at Turn 10 that will let fans explore the infield for the first time. This area in the infield will be one of six new villages for fans to experience and it's called ONEderland.

At ONEderland, fans can check out El Pulpo Mechanico from Burning Man, a mechanical Octopus on wheels shooting flames from its 8 tentacles. The Iconic Burning Man Art Car "El Pulpo Mechanico" can be spotted in as well. Additionally, iconic burning man art cars like Balanceville and its rising and falling cockpit will be roaming around.

Between track sessions, guests can also grab a margarita and watch masked Lucha Libre wrestlers go at it in the La Cantina Village.