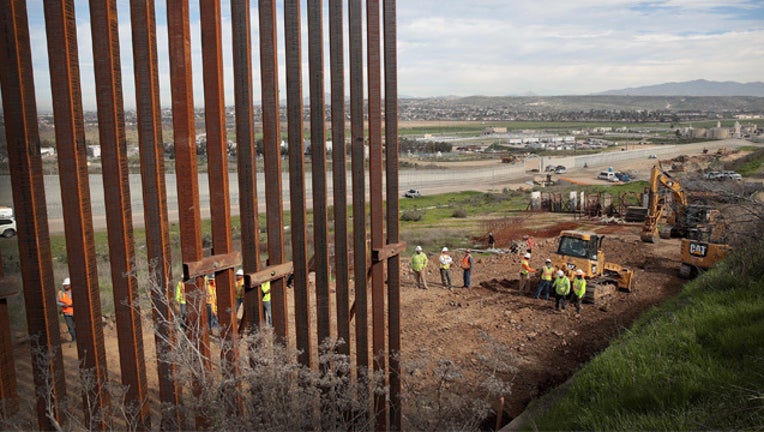 A section of border wall is constructed on the U.S. side of the border on January 28, 2019 in Tijuana, Mexico. (Photo by Scott Olson/Getty Images)

WASHINGTON (AP - If President Donald Trump declares an emergency to build the wall with Mexico, he still needs money to pay for it. And shifting money from other accounts to deliver the $5.7 billion he wants is not without political problems.

The administration has been eyeing several pots of money - including disaster funds, counter-narcotic accounts and military construction dollars - to fund Trump's wall, according to congressional aides and White House officials.

One possibility is shifting a portion of the $13 billion in disaster aid Congress approved last year for Puerto Rico and a dozen states, including California and Texas, hit hard by hurricanes, flooding and other disasters. The money funds Army Corps projects, and the Puerto Rico aid alone totals more than $2 billion.

But Texas lawmakers revolted over White House plans to tap Hurricane Harvey funds, and Sen. John Cornyn, R-Texas, said Thursday they won assurances from the White House that the money won't be used for the wall.

"We've been pretty clear we thought that would be a mistake," said Cornyn, who along with the state's governor and other lawmakers urged the White House to stay away from that account. "There's limited pots of money he can get into, but I'm pretty confident he won't get into disaster funds."

A more likely option is the military construction account that's used to upgrade bases and facilities.

Congressional aides said there is $21 billion available. That includes about $10 billion in funds from the current 2019 fiscal year that ends Sept. 30, and $11 billion remaining from the previous four years, said the aides. They spoke on condition of anonymity because they weren't authorized to speak publicly about the funding details.

But tapping the military construction money also may hit resistance. The money often goes for improvements to housing, roads, hospitals and other facilities, and can be used to eliminate mold or other hazardous problems at military installations in congressional districts across the nation and around the globe.

As an example, the aides said, there is funding for a medical facility at a U.S. base in Germany that has been partially constructed. If those funds were used, the medical center could be left half built.

The president can decide to use military construction funds, but it will be up to the Defense Department to determine which specific projects would lose their money, the aides said.

While the president has the authority to take the funds, the aides said that according to the law the money must be used in support of U.S. armed forces and the key question is whether Trump could prove the funds were being spent to actually support troops.

The Defense Department has declined to provide any details on the amount of money available.

Potentially easier to tap is the military's counter-drug account, so-called Section 284 money, as suggested by Rep. Mark Meadows, R-N.C., a Trump ally and leader of the conservative Freedom Caucus. But it falls short of what's needed with about $800 million available.

Using that money would not require declaration of a national emergency, but aides said it is less likely the president would dip into those funds.

"I've obviously suggested 284 for a long time," Meadows said recently. "There's not enough money there, but it's a good start."

The White House has been searching for funding as it became clear Congress would not provide the money Trump was demanding to build the wall. Trump had campaigned on the promise that Mexico would pay for it.

Instead, this week lawmakers struck a bipartisan deal to provide nearly $1.4 billion for fences and barriers along the southern border as part of a broad funding package to avoid another federal shutdown.

The Senate approved the compromise on Thursday, and House passage was assured before Friday's deadline. The White House said Trump would sign it but then declare a national emergency and perhaps invoke other executive powers to build the wall.

President Trump promises law enforcement that 'the wall is coming'