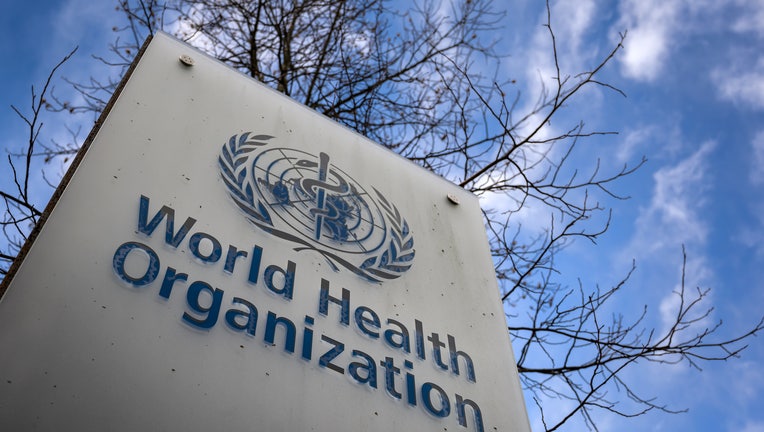 This photograph taken on January 29, 2021 shows a sign of the World Health Organization (WHO) at the entrance of their headquarters in Geneva amid the Covid-19 outbreak, caused by the novel coronavirus. (Photo by Fabrice COFFRINI / AFP) (Photo by FAB

GENEVA - The World Health Organization said it will release a report on the origins of the novel coronavirus next week.

The WHO was expected to release the report the week of March 15 after a delegation traveled to China. Spokesman Christian Lindmeier said the release of the widely anticipated report is now "likely" to be pushed back until next week.

Lindmeier said the report was "simply not ready" and the team members who have been working with Chinese officials to draft it "want to get it right."

RELATED: Swollen lymph nodes can be side effect of COVID-19 vaccine and confused for cancer, doctors say

Peter Dasnak, a member of the WHO delegation that traveled to China, told NPR that wildlife farms in southern China are the most likely source of the coronavirus pandemic. Dasnak, who is also a disease ecologist with EcoHealth Alliance, told the outlet that many farms had exotic animals.

"They take exotic animals, like civets, porcupines, pangolins, raccoon dogs and bamboo rats, and they breed them in captivity," he said in an interview with NPR on March 15. Dasnak told the outlet his team found evidence that some of the animals, which are known to carry the coronavirus and similar viruses, were being sold at a meat market in Wuhan.

"I do think that SARS-CoV-2 first got into people in south China. It’s looking that way," he continued.

In March 2020, the WHO put out its first report regarding the origin of COVID-19, suspecting bats as the source.

"Bats are natural reservoirs of coronaviruses, and likely harbor many other coronaviruses not yet discovered," the report read. But the report couldn’t definitively determine how a human first contracted the virus and from which animal.

CDC director discusses study on COVID-19 vaccination completion in US

A new CDC study found that roughly 9 out of 10 people in the U.S. received their second dose of the COVID-19 vaccine within the recommended timeframe.

The report also stated while the first COVID-19 case was identified in Wuhan and linked to a local meat market in December 2020, it was possible that the virus originated elsewhere.

The WHO’s latest investigation and report come amid calls for transparency from some scientists who have voiced concerns about the agency’s process.

In March, a group of scientists penned an open letter asking for an independent study into the origin of COVID-19. The scientists said they believed the Chinese government may influence the WHO and expressed concerns that data could be withhold or manipulated.

RELATED: Moderna begins study of COVID-19 vaccine in children under 12

"We cannot afford an investigation into the origins of the pandemic that is anything less than absolutely thorough and credible," the group said.

Since the WHO declared the COVID-19 pandemic more than a year ago, more than 120 million people around the world have contracted the virus and more than 2.6 million people have died globally, according to Johns Hopkins University.

In the U.S., more than 29.5 million people have contracted the virus and more than 536,000 people have died since the start of the pandemic, according to Johns Hopkins.

More than 39 million Americans have been fully vaccinated, according to the U.S. Centers for Disease Control and Prevention.