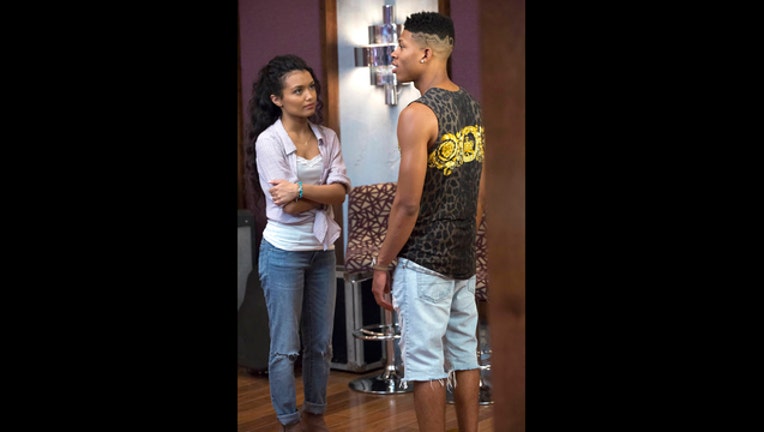 Jamila Velazquez and Bryshere Gray in the “Be True” episode of "EMPIRE" scheduled to air on Wednesday, Oct. 21 on FOX. ©2015 Fox Broadcasting Co. (Chuck Hodes/FOX photo)

HOUSTON (FOX 26) - Part of the story line for the second season of the FOX Television show "Empire" includes rapper Hakeem Lyon trying to form a 'girl group' with only Latina singers. When one of his prospects betrays him, he loses all hope until he walks into a bar and hears the voice of an angel singing the Spanish version of "Blue Bayou" by Linda Ronstadt.

During the "Poor Yorick" episode, Hakeem (portrayed by Bryshere Gray) is stunned as the young shy singer barely utters the first verse of "Lago Azul"  before delivering a powerful edition of the song originally written in English by musician Roy Orbison in the late 1960s.

Actress and singer Jamila Velazquez will be portraying Laura on "Empire" for at least three episodes during the second season of the show, the most successful program for FOX Television in 2015. Before her role as Laura, Velazquez was featured in the film "Come Home Raquel" in addition to recurring roles on the ABC Family television show "Twisted" and NBC procedural drama "Law & Order: Special Victims Unit."

Order the song "Lago Azul" by Velazquez from the "Empire" soundtrack on iTunes at https://itunes.apple.com/us/album/empire-music-from-poor-yorick/id1043712774. She will also perform the song "Mimosa" during the "Be True" episode of "Empire" on Wednesday, Oct. 21, which will be available for download on iTunes on that day.