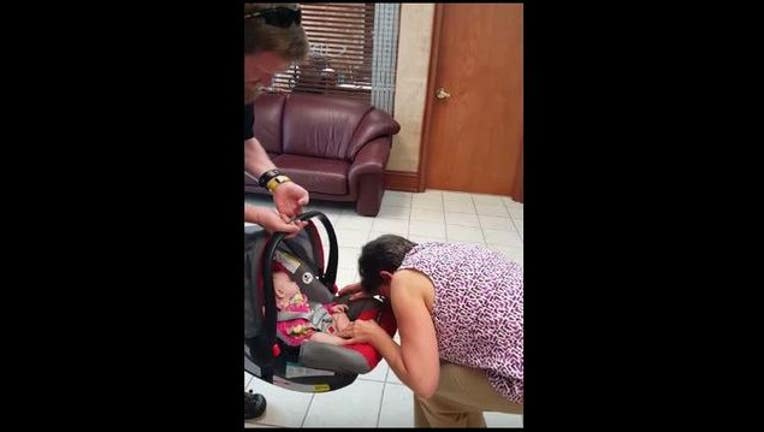 Credit: Laura Dell/YouTube -- Sharon is completely overwhelmed when she gets to meet her new granddaughter.

(WTXF) - A grandmother was surprised with both the announcement of her new baby granddaughter and actually meeting her on the exact same day.

Sharon Bloomingdale’s daughter and son-in-law, Laura and Josh Dell, were just approved for adoption three weeks before they were matched up with their baby daughter.

So Laura and Josh decided to capture her mom’s reaction on camera.

The same day they took their daughter, Ellie, home, they went to Sharon’s Ohio workplace to introduce her to her new grandma.

Laura gave Sharon an onesie, and the grandmother instantly caught on. Her reaction was just priceless and excitement contagious as she rushed to meet the baby girl, promptly bursting into tears.

"After the video ended, she walked around the office with Ellie and told everyone, 'When I came to work this morning, I wasn't a grandma and now I am,'" Laura told the Huffington Post.

Ellie and Sharon have something in common already as well – Sharon was adopted as an infant too.

"It'll be great for Ellie to see the video when she grows up and know that grandma loved her even before she got to know her," Laura said.

Ellie is just five months old and was adopted only a month ago. Initially, Laura and Josh weren’t going to share the video publicly, but later decided to.

"We love adoption and there are so many kids out there that need a home. Next month is National Adoption Month, so we decided this would be a way to show people how beautiful adoption is," Laura said.

The Dells have set up a fundraising campaign with AdoptTogether to help cover the cost of the adoption.