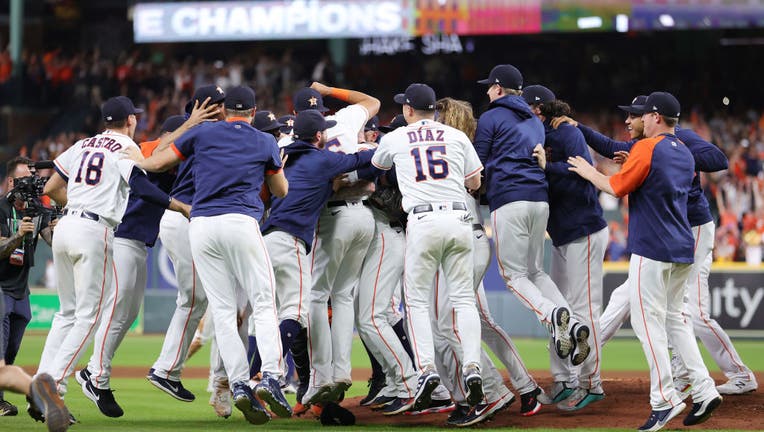 HOUSTON, TEXAS - OCTOBER 22: The Houston Astros celebrate after defeating the Boston Red Sox 5-0 in Game Six of the American League Championship Series to advance to the World Series at Minute Maid Park on October 22, 2021 in Houston, Texas. (Photo b

The Astros defeated the Boston Red Sox in the American League Championship Series to face the National League champion Braves in the best-of-seven series.

Whether you're watching the games from home or heading to the Juice Box, FOX 26 has everything you need to know to enjoy the World Series.

What channel is the World Series on?

All of the the World Series games will be broadcast on FOX!

FOX 26 will begin pre-game coverage with our Swing for the Ring specials.

Coverage for the games will start at 7 p.m. each night with Joe Buck and John Smoltz calling the games from the broadcast booth.

Major League Baseball says games will be available to stream for MLB.tv subscribers through a participating TV provider.

Jim "Mattress Mack" McIngvale bet $3.2 million that the Astros would win the World Series, and he would win $36 million if they do.

What is the World Series schedule?

Since Houston had the better regular season winning percentage, the Astros have home field advantage for the World Series.

FOX 26 Reporter Matthew Seedorff is in the crowds as fans celebrate their Astros who are heading to the World Series.

Houston has a team slugging percentage of .443 this postseason.

Yordan Alvarez leads the club with a mark of .794, including seven extra base hits and nine RBIs.

A diehard Houston Astros fan is giving back to those in our community.

THE LATEST FROM MAJOR LEAGUE BASEBALL

Atlanta has a team batting average of .250 this postseason.

Eddie Rosario has led the Braves with an average of .474, including five extra base hits and 11 RBIs.

Astros fans gearing up for the World Series, here’s a few things you should know

Where do I get World Series tickets?

Tickets for the World Series will not be available to purchase at the Minute Maid Park box office, fans must go to the Houston Astros website to buy them or by phone at 1-877-9ASTROS.

Right now, the starting price for even a nosebleed seat is around $500. Tickets will also be available on third-party sites like Vivid Seats and Ticketmaster.

The Astros say tickets are limited, so fans who want to guarantee their seats, should buy 2022 season tickets, which are also on sale now.

Postseason Street Fest is back!

A special World Series postseason Street Fest will begin starting three hours before every home game in the Plaza.

The Houston Astros say fans are encouraged to wear orange as they look to Orange Out Houston all week long.

Owner Jim Crane reacts to the Houston Astros win over the Boston Red Sox in Game 6 of the ALCS.

Road to the World Series

The Astros had a hell of a regular season. With a 95-67 record, they were first in the AL West. Since they have home field advantage in this World Series, it's important to note, the Astros were 51-30 on their turf in 2021.

In the postseason, Houston defeated the Chicago White Sox in the ALDS, becoming the third team in baseball history to reach five straight League Championship Series. After falling behind 2-1 in the ALCS against the wild-card Boston Red Sox, the Astros clinched the pennant in a 4-2 series win.

The Braves had an 88-73 regular season record, making them first in the NL East. With Game 1 in Houston, Atlanta hopes to keep its away record favorable after posting 46-35 away from home in 2021.

In the postseason, the underdog Braves took down defending World Series champion Dodgers four games to two in NL Championship Series after blowing 2-0 and 3-1 leads against Los Angeles in the 2020 NLCS. Dodgers had won 7 straight postseason elimination games dating to last year before Braves finally put them away, winning Game 6 at home 4-2.

Heavy-hitting Astros are in the World Series for the third time in five years -- a fourth in franchise history. They're looking for a second title after winning the 2017 crown, which was later tainted by the illegal sign-stealing scandal.

Houston lost to Washington in the 2019 World Series, dropping Game 7 at home as the road team won every game. The only other pennant came in 2005 as a member of the National League. Astros were swept in that World Series by the Chicago White Sox.

Once a World Series regular in the 1990s, the Braves are back for the first time in 22 years after 12 playoff appearances from 2000-20 failed to produce a pennant.

Houston and Atlanta met in five NL Division Series from 1997-2005, with the Braves winning the first three and Astros the last two. But the clubs haven’t played since 2017.