Some Houston Astros players are former Round Rock Express members

A few of the Houston Astros players have ties to Central Texas. Chad McCormick, Kyle Tucker and Yordan Alvarez were former members of the Round Rock Express when it was the Astro's Triple A club.

AUSTIN, Texas - The stage is now set for the World Series. As players got in some batting practice, fans were already gathering outside Minute Made Park.

"We know this is probably the best team the Astros have ever had," said an Astros Fan.

The World Series, back in Houston, is especially sweet for long time fans like Jan Mingus. The 81-year-old remembers the tough years. But for someone who grew up a ball fan, this new era of winning is certainly special.

"It’s unbelievable the difference in the crowd. It’s huge now, and it never was before," said Mingus.

Only five players are left from the Astros team that won it all back in 2017.

A few on the current roster also have Austin ties. Former members of the Round Rock Express when it was the Astro's Triple A club, Chas McCormick, Kyle Tucker and Yordan Alvarez. They all sent balls flying out of the Dell Diamond. 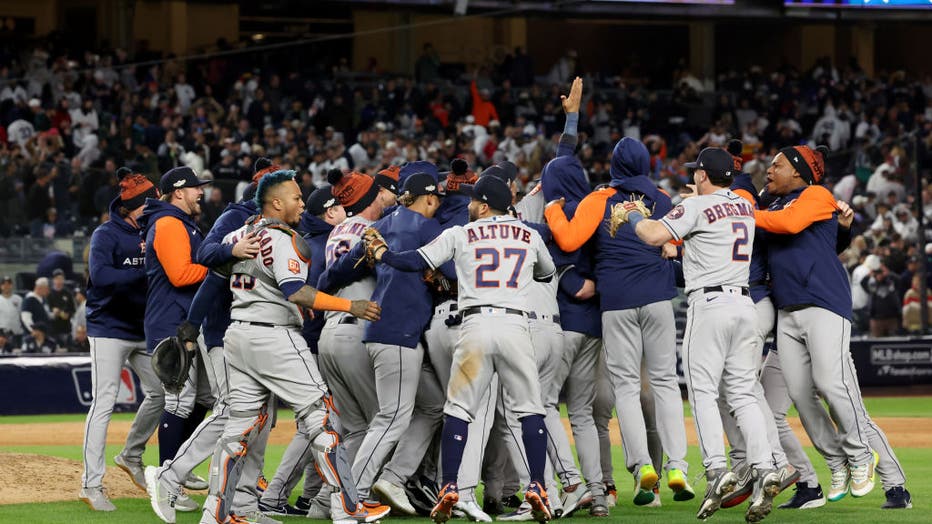 NEW YORK, NY - OCTOBER 23: Members of the Houston Astros celebrates with teammates on the field after Astros defeated the New York Yankees in Game 4 of the ALCS at Yankee Stadium on Sunday, October 23, 2022 in New York, New York. (Photo by Mary DeCic

The first two games of the World Series at Minute Made are sold out.

Ticket prices on sites like Stubhub ranged from $450 to $800. Add another $50 to $100 for parking. Once inside, expect a dog and a beer to take at least a $13 bite out of your wallet. There is a lot of BBQ on the menu, but don’t expect Philly cheese steaks to be served up. And before the game, a special event called AstroFest is located outside the ballpark.

"I think it’s amazing, and I think they are going to win tonight," said a young Astros Fan.

The last time the Astros lost this season was Oct. 3, almost a month ago. They were beaten ironically by the Phillies, no less.

The Astros ended up taking that final season series, but that win did help Philadelphia get in the playoffs. And back to this Texas sized rematch.