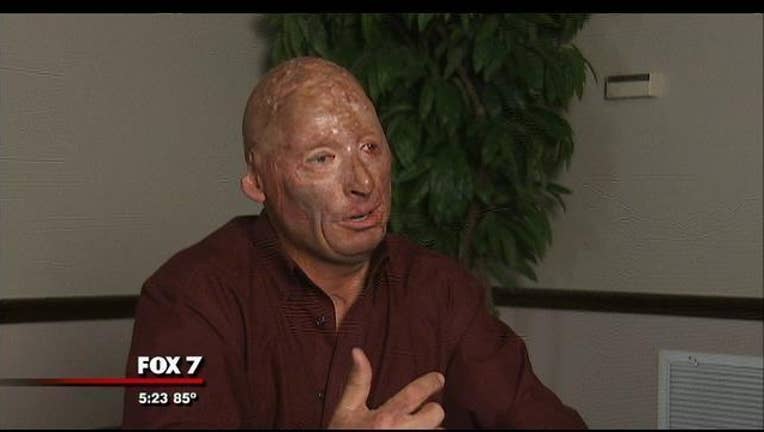 This is Bobby Henline before his last tour in Iraq. Then his life changed after a roadside bomb nearly killed him. Now if your instinct is to be sympathetic and low-key because of his disfigurement--don't bother. He'd rather you laugh with him, after all he is a stand-up comedian. Bobby Henline considers his standup act as outreach with a wink.

"Where ever I go I'm stared at, and others with disfigurements get stared at...but if I go out there on stage and I'm ‘look I'm human I have a sense of humor' and hopefully they'll be able to approach other people and help others deal with it," Henline said.

This mission is a long way from the mission in Iraq that lead to this, that's what was left of his vehicle after the IED went off.

"I don't remember anything that day. I remember having coffee that morning and I got hurt at 5 in the afternoon. It's all wiped out," he said.

Henline lost the four buddies with him. His head was burned to the scalp. He began a long painful recovery of his body and his soul. There were some very dark times.

"I was going through survivor's guilt...Why did I live? And then being a burden on my family...my kids tied my shoes I didn't want my kids to see me having bad days. So I would pray to God every night to just let me go to sleep and not wake up. I thought it would be easier on my family if I didn't make it," he said.

"I kept waking up every day, he wouldn't take me, so I said I'm ok I'm here you must have me here for a reason, please show me," he said.

Occupational therapist Susy Stanley saw how he would crack jokes to help deal with the pain of the countless surgeries for his burns.

"She was like "oh my God you're so funny you should do standup comedy...and she had that high pitched annoying voice ha ha," he said.

"I was obnoxious about it probably...ha ha because we all knew he'd be great and he wanted to do it...but I'm sure it's hard to get out on stage, so we made him pinky promise and look at him now, I'm glad I was so obnoxious," Stanley said.

His first time at an open mic didn't go too well.

"I didn't think I could get the public to laugh at what happened to me. It's one thing in the hospital with other troops and family, they get it...but to go to the public and say I got blown up in Iraq and try to make them laugh at that. I didn't think it was possible," Henline said.

But with help from another comedian he began to hone his act and has performed in LA, Vegas and Texas.

"If I can come from my deathbed where the doctor said there's no medical explanation for why I'm alive and come out and do stand up, go around the world helping more people, then the guy who blew me and my buddies up. If I could help more people then he's ever hurt that's the best revenge I can get for them," he said.

And Henline isn't just getting out his message with his standup act. He is also a motivational speaker.

To catch his act or learn more about this amazing veteran click here.