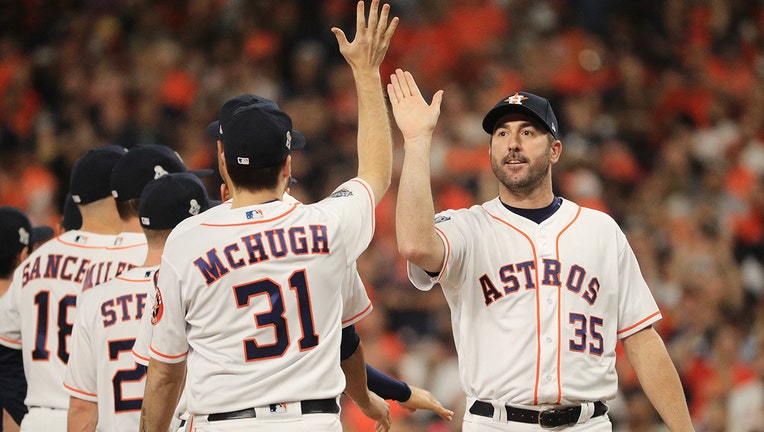 Justin Verlander #35 of the Houston Astros is introduced prior to Game One of the 2019 World Series against the Washington Nationals at Minute Maid Park on October 22, 2019 in Houston, Texas.

HOUSTON - As the Houston Astros welcome back the Washington Nationals for Game 2 of the 2019 World Series, the Astros are looking to quash the possibility of a 2-0 lead by the Nationals after Wednesday’s game.

While the Astros hope to keep the team that finished second in the NL East at bay, this may actually be more of a challenge than previously thought, considering the Nationals have tasted victory nine out of the last 10 times they took the field in Houston.

The Nationals are here to play ball, and though they’ve won 15 of the past 17 games against the Astros, Houston certainly knows this, and so does arguably their most consistent pitcher, Justin Verlander.

Gerrit Cole may have been one of the leagues most promising pitchers this season but following his first loss since May, the arrival of Game 2 starter Verlander is sure to be a sight for soar eyes for Astros fans.

Verlander led an unforgettable season this year pitching 223 innings with 21 wins, while also becoming the 18th player in MLB history to reach 3,000 strikeouts along with hitting 300 strikeouts in a single season following the Astros’ 6-3 win at Angel Stadium in Sept.

Still, with a powerhouse starter like Verlander, Houston’s manager AJ Hinch isn’t taking any chances following a few tweaks he made to his lineup just before Game 2.

A night after designated hitter Yordan Alvarez had two hits and drew a walk, Hinch moved the rookie up one spot in the lineup to bat sixth on Tuesday night. Alvarez switched places with shortstop Carlos Correa, who had a single and three strikeouts in Game 1. Robinson Chirinos was in the lineup to catch Justin Verlander after Martín Maldonado caught on Monday night.

But for the Nationals, if it isn’t broken don’t fix it. Washington is going with the same lineup they had in their 5-4 victory in Game 1 as they try to maintain a lead with Stephen Strasburg on the mound before the series shifts to Washington for Game 3 on Friday.

Game 2 of the 2019 MLB World Series will be hosted in Houston and can be watched everywhere on FOX. Pre-game coverage begins at 6:30 p.m. ET with the first pitch slated for 8 p.m. ET.