Austin FC fans gathered at Q2 Stadium to watch the Verde and Black take on LAFC.

LOS ANGELES (AP) - Cristian "Chicho" Arango scored the go-ahead goal for the second straight game and the Los Angeles Football Club advanced to its first MLS Cup final with a 3-0 victory over Austin FC on Sunday.

LAFC — which won the Supporters Shield as the top team in the regular season — will host the winner of Sunday night’s Eastern Conference final between NYCFC-Philadelphia Union on Saturday afternoon.

In the second half, Maximiliano Urruti scored an own goal and substitute Kwadwo Opoku added a score in the late stages.

It’s just the second time in the last 10 years that the winner of the Supporters Shield made the MLS Cup final. 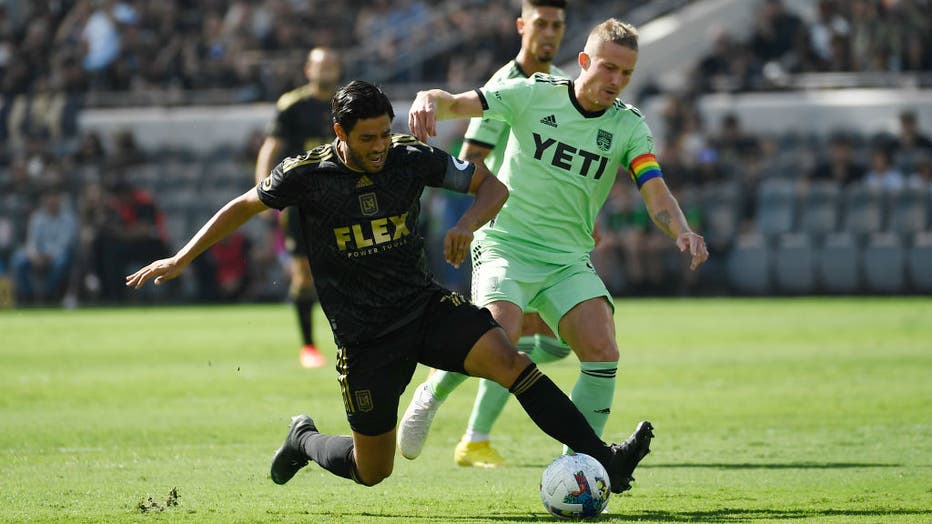 LOS ANGELES, CA - OCTOBER 30: Carlos Vela #10 of Los Angeles FC is tackled by Alexander Ring #8 of Austin FC during the first half of the Western Conference Finals of the 2022 MLS Cup Playoffs at Banc of California Stadium on October 30, 2022 in Los

Arango headed in a crossing pass from Carlos Vela on a corner kick in the 29th minute to put LAFC on top.

The forward has scored in 26 of the 52 MLS games he has played since making his debut in August of last season. He is an MVP finalist after scoring 30 regular-season goals.

After Urruti’s own goal in the 62nd minute, Opoku took advantage of a turnover and put a left-footed shot past Austin goalkeeper Brad Stuver.

LAFC has won 11 of its last 12 matches (including the postseason) at home.

Austin FC finished in second place in its second season in MLS and had a 16-10-8 record during the regular season.