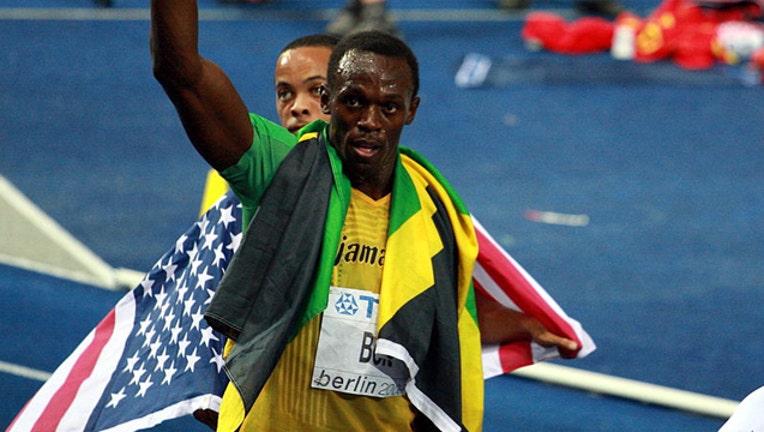 KINGSTON, Jamaica (AP) — Usain Bolt's Olympic quest is in doubt, after the sprint superstar left his country's national championships with a hamstring injury shortly before he was going to run the 100-meter final.

And that was just one part of a bizarre night at National Stadium.

Bolt's longtime rival Yohan Blake won the 100 title and formally qualified for the Rio de Janeiro Olympics — but only after a false-start disqualification call against him was overturned after review.

But even after Blake regrouped and prevailed, all the buzz was about Bolt and his status going forward especially since the national meet serves as the Jamaican Olympic trials.

He's not out of the Rio Games, but his status hinges now on how he does at a meet in London in three weeks. Bolt said he was diagnosed with a Grade 1 hamstring tear — the most mild sort — and that the discomfort began presenting itself in his quarterfinal race on Thursday night.

"I have submitted a medical exemption to be excused from the 100m final and the remainder of the National Championships," Bolt said in a statement released through Jamaican officials.

"I will seek treatment immediately and hope to show fitness at the London Anniversary Games on July 22 to earn selection for the Olympic Games in Rio."

Blake, who finished second to Bolt at the London Games in the 100, said he was confident that the world-record-holder will be in Rio.

Blake won the 100 final in 9.95 seconds, 0.01 ahead of Nickel Ashmeade. Jevaughn Minzie got third in 10.02 seconds, which figures to send him to Rio — though his role could depend on how Bolt's hamstring recovers.

Bolt's absence was announced on social media but never to the crowd, which left many of the green-and-gold-clad fans wondering what was going on with the national hero who would likely be considered the favorite to win the Olympic 100 gold for a third consecutive time — something no man or woman has ever accomplished.

Then came the false-start, followed by a review and a showing of the red card to Blake — who reacted with anger, so much that security officials stepped onto the track just in case. Then came another review of the tape, Blake was cleared and he went back to his lane.

"I waited four years for this," Blake said. "I've been injured, I've been battered and I just made it back."

Even with the injury, Bolt won both of his heats at this meet, first the quarterfinal on Thursday and then the semifinal on Friday.

Bolt seemed to be looking at the clock at the end of his semifinal, which he won in 10.04 seconds and capped by giving runner-up Senoj-Jay Givans — his closest pursuer — a knowing smirk as they crossed the line.

He put on a fresh shirt and walked off the track after a couple minutes, giving no indication that he was hurting. The news came about an hour later.

Elaine Thompson was being anything but cautious, on her way to knocking off two-time defending Olympic 100 gold medalist Shelly-Ann Fraser-Pryce and winning the national title. Thompson equaled Jamaica's record in the 100, winning with an emphatic time of 10.70 seconds. She beat Fraser-Pryce by 0.23 seconds.

Thompson isn't new on the world track scene — she's the 2015 world silver medalist in the 200 — but what awaits in Rio will represent her first taste of Olympic-bright lights.

She's only 24, was a bit of a wild child in the past and has long been thought of in her country as the heiress apparent to Fraser-Pryce and Veronica Campbell-Brown (who was fourth Friday in the women's 100 final) atop the Jamaican women's sprint throne.

That day may have arrived.

The meet continues Saturday and Sunday, without its biggest star.