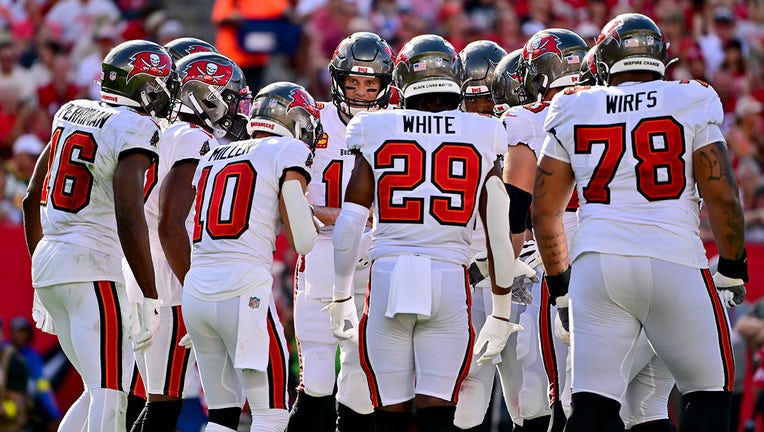 File: Tom Brady of the Tampa Bay Buccaneers huddles with his team against the Green Bay Packers during the second quarter in the game at Raymond James Stadium on September 25, 2022 in Tampa, Florida. (Photo by Julio Aguilar/Getty Images)

TAMPA, Fla. - One of this weekend’s high-profile NFL matchups will take place as scheduled, despite the destruction left across Florida by Hurricane Ian. The Tampa Bay Buccaneers will still host the Kansas City Chiefs on Sunday night.

The Bucs had moved practices to South Florida earlier this week when forecasters warned that Tampa was a possible target for the rapidly growing Ian. The NFL had put plans in place to move the game to Minnesota if Raymond James Stadium was unable to host – a direct hit on the Tampa Bay area by a Category 4 storm would have left much of the region under several feet of water, aside from the catastrophic wind damage.

But Hurricane Michael came ashore about 100 miles south, bringing that destruction to the Fort Myers area instead.

"Our thoughts and prayers remain with the many thousands in the Southwest Florida region who have been severely impacted by Hurricane Ian," the Buccaneers said in a statement released Thursday afternoon. "We have informed the NFL, after consulting with local and state agencies, that we are ready to play Sunday night's game against the Kansas City Chiefs at Raymond James Stadium as originally scheduled."

The game will be a rematch of Super Bowl LV, which saw Tom Brady win his seventh title as the Bucs shut down the Chiefs.

The Buccaneers’ statement also thanked first responders and the Miami Dolphins for their help, and suggested a team-sponsored fundraiser for storm victims may be in the works.

Indeed, millions of Floridians remain without power as rescues continue from Sanibel to Orlando. After the storm pummeled the coast, it dumped over a foot of rain across most of Central Florida.

Hurricane warnings were issued for the Georgia and South Carolina coasts as Ian, now a tropical storm, began to re-intensify over the Atlantic.