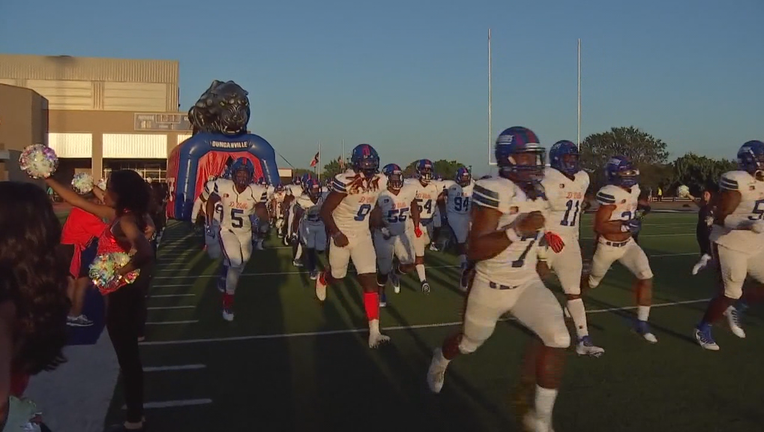 DUNCANVILLE, Texas - Duncanville has canceled its game with an Ohio team facing accusations of being an illegitimate program and lying to get on national television.

The Panthers were scheduled to play Bishop Sycamore on Sept. 10. The district announced Tuesday it was pulling out of the matchup due to "unanswered questions" about the school and its team.

Bishop Sycamore’s bizarre story became national news after it lost Sunday, 58-0, in a televised game on ESPN against the powerful IMG Academy. ESPN announcers commented during the telecast that the team barely had enough players to participate and there was a clear disparity in talent.

That game ignited a firestorm online as reporters and fans began digging into Bishop Sycamore’s backstory. It turned out the program had only existed since 2020 and went 0-6 last season. It had already played two games in 2021, including one just two days before the ESPN game, and has now been outscored 342-49 in nine games. The school is also not on a charter school list maintained by the Ohio Department of Education.

"Student safety is our top priority and I can’t ask our student athletes to take the field next week without knowing more about who they will be facing," said Duncanville ISD Athletic Director Dwight Weaver in a statement. "Our school district’s core values speak to honesty, integrity, ethics and providing a safe environment for students. This situation calls into question many of those values, so we are cancelling this game."

Duncanville ISD officials said they have been trying to get in contact with someone from Bishop Sycamore since the ESPN game on Sunday, but they have been unable to reach someone.

The district says it has serious concerns about how the school operates and the eligibility of its players. Some online reports claim there are students older than high school age who are on the Bishop Sycamore roster.

USA Today reported Tuesday that Bishop Sycamore's head coach, Roy Johnson, had been fired. Johnson had an active bench warrant out for his arrest and previously was investigated for fraud.

Bishop Sycamore founder Andre Peterson insisted to the paper the school wasn't a scam, despite the fact the school's listed address is a P.O. Box and it is not affiliated with Ohio's High School Athletic Association.