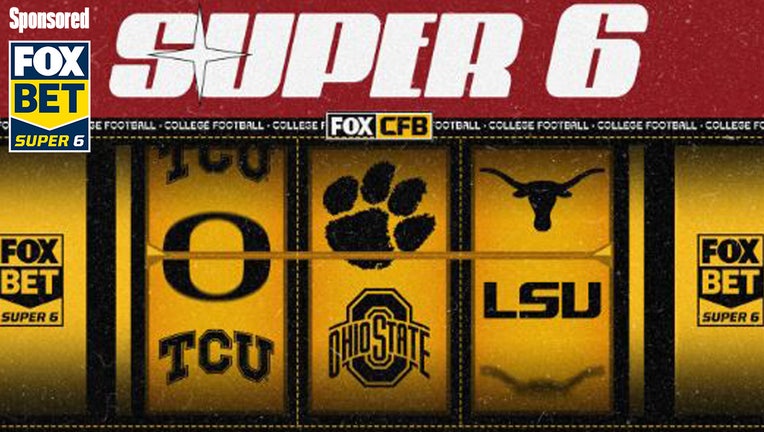 After Alabama fell to Tennessee in an instant college football classic last week, it got us thinking about a theme for this week.

And the theme we came up with is "play to win."

Every season, Nick Saban & Co. come into the season like the unbeatable Big Bad Wolf. But they are beatable. Texas A&M proved that last regular season, Georgia proved it in the National Championship Game and the Vols reminded us again in Week 7.

You have to play to win.

We want you to do just that in Week 8 as you make your FOX Bet Super 6 College Football contest picks. With $25,000 at stake, we want you to get your head in the game and know that you have a chance to fatten your pockets with some cold hard cash.

Because people really do win. So why not you?

FOX Bet Super 6 is a free-to-play contest where you pick the winners and margins of victory of six marquee matchups. Submit your picks before the games kick off on Saturday, and if you get them all correct — cha-ching! $25,000 could be all yours.

To get in the game for your chance at the prize, you must download the FOX Bet Super 6 app. It's that easy, and it's really a lot of fun.

So play to win.

If you need a little help before you make your picks in the app, check out our predictions for this week's FOX Bet Super 6 marquee matchups!

This is the ACC top 20 matchup that fans and bettors didn't know we needed. But "orange" you glad it's going down? Get it — Syracuse and Clemson are both orange?

All jokes aside, Clemson has won four-straight matchups against Syracuse, and in 2021, the Tigers barely got the W. The final score of last year's game was 17-14.

And it's a really big deal that Clemson comes into this contest 7-0 and Syracuse at 6-0. These records mean that Clemson's home field Death Valley will host two undefeated squads with records of 6-0 or better for the first time in its 81-year history.

And speaking of history, the Tigers — favored by 13.5 points at FOX Bet — have just that working in their favor.

Under coach Dabo Swinney, the Tigers are 85-3 straight up (SU) when favored at home. They're 52-4 SU at home under Swinney against ACC opponents. Also, Clemson has averaged 36.3 points per game during this 13-game winning streak it's on.

Give us orange — the Tiger type.

Prediction:
Clemson by 7 to 8

These two Big Ten teams take on one another in FOX's Big Noon Saturday contest.

And we're expecting this one to be all about the Buckeyes.

Under coach Ryan Day, Ohio State is 28-1 SU against conference opponents. This weekend, Ohio State is favored to beat the Hawkeyes by 29, and the Buckeyes are 14-0 SU under Day when favored by 25 points or more.

On the other hand, Iowa is 0-5 SU when an underdog of 25 points or more under coach Kirk Ferentz. Also, under Coach Kirk, the Hawkeyes are 20-43 SU as a road underdog.

It's no secret why Ohio State is the No. 2 team in the country. It has an electric offense that seems unstoppable and puts up a ton of points.

This weekend will be no different.

Prediction:
Ohio State by 21 to 26 points

The Longhorns falling 20-19 in a close one against then-No. 1 Alabama in Week 2 is looking more and more like a quality loss. Since then, Texas has won four out of five and is on a three-game winning streak. Make that a four-game streak after Texas topples Oklahoma State.

There's a lot of chatter about how Texas is officially back under coach Steve Sarkisian. It finally looks like the Horns are getting their house in order ahead of Arch Manning's arrival.

Texas has scored at least 34 points this season in five games and leads the Big 12 with 172 first downs.

The Cowboys lead the series 17-13-2, but the Longhorns have won nine of the 12 meetings at OK State.

State has forced 35 turnovers in its past 24 games, so Texas must be diligent about protecting the ball.

We like orange again in this one — but the burnt type.

Prediction:
Texas by 7 to 8 points

The Ole Miss Rebels are 7-0. They've sneaked into the top 10 alongside their SEC cousins Georgia, Bama and Tennessee because they want in on the elite family fun.

But their other cousin LSU will crash that party this weekend when the Tigers take down the Rebels in Week 8.

Be on the lookout for the Jayden Daniels Show at Tiger Stadium. His 1,564 yards passing and his 403 rushing yards are team-bests. Also, look out for the Tigers defense to do work. Their 14 forced fumbles lead the FBS.

This is our hands-down favorite matchup of the college football Week 8 slate.

Two Pac-12 teams ranked in the top 10 with a possible College Football Playoff (CFP) appearance at stake. And it's on FOX?

Inject this into our veins.

Oregon's 512.5 yards per game lead the conference. The Ducks do a lot of damage by pounding the rock, averaging 6.22 rushing yards per carry. That's the most in the Pac-12 and ranks fourth in the nation.

On the Bruin side of the ball, their offense has also been the highlight of their 6-0 start. UCLA is one of just seven teams in the FBS to have 15 or more rushing TDs, 15 or more passing TDs and a 50% or higher conversion rate on third down.

Long story short, expect a lot of points from both teams. But in the end, the Ducks will quack to a win.

Prediction:
Oregon by 5 to 6 points

KSU has had success against TCU:

Kansas State has won three in a row against TCU.

But we're riding with the Horned Frogs in this one!

The Frogs are the only undefeated football squad in the big ol' state of Texas. Their last three wins were over ranked opponents. They've scored at least 38 points per game this season and rank second in the nation in yards per play.

Feeling froggy? Then jump all over TCU to take down K-State this weekend.

Open your FOX Bet Super 6 app and make your selections before Saturday's games kick off. Remember to tag us across all social media platforms at @FOXSuper6 and @EricaReneeD and show us your picks using the #EricaSuper6 hashtag!