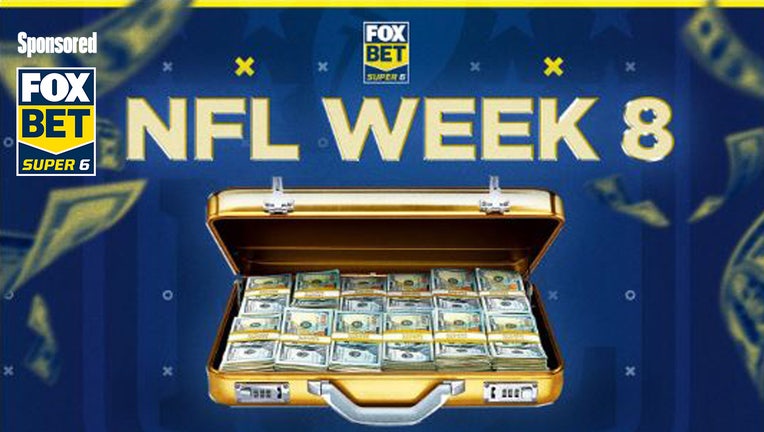 NFL Week 7 was unlucky for a couple of teams that were handed major upsets by underdogs.

The Commanders beat the Packers, and the Panthers defeated Tom Brady and the Bucs. The PANTHERS!? And that's after everything they've gone through this season.

Based on some of last week's results, we know to expect the unexpected in Week 8. And it's the weekend before Halloween, so games could certainly get very spooky.

The Falcons need to be on upset alert after what the Panthers pulled last week. The Rams need a redemption plan as they face the 49ers for the second time this season. And most importantly, the Eagles must beware of the Steelers as Pittsburgh tries to save what's left of its season. This matchup will have a special FOX Bet boost, so keep your eyes on this one.

And if you want to win $100,000, you need to keep your eyes on all the above matchups, plus three more that are a part of this week's FOX Bet Super 6 contest.

FOX Bet Super 6 is a free-to-play contest where you pick the winners of all six marquee games with their margins of victory for a chance to win $100,000 in our NFL Sunday Challenge. Just download the FOX Bet Super 6 app on your phone or mobile device, make your picks and submit your selections before Sunday’s games kick off.

It's really that easy. More importantly, it's free and a lot of fun.

Trying your luck at winning 100 grand is way more fun than dressing up in that same Halloween costume you wear every year. So put down the Michael Myers mask, read our predictions for this weekend's games and prepare to make your picks.

Did an upset win fall into the Bears' lap Monday night due to Bill Belichick's questionable quarterback coaching? Or are coach Matt Eberflus & Co. really on the cusp of turning Justin Fields and Chicago's offense into something special?

Stay tuned for the next episode of As the NFC Turns: Bears versus Cowboys.

That's right. This matchup between Chicago and Dallas will reveal if the Bears' Monday Night Football win was a fluke. It will also shed light on whether Dak's return is the dynamic the Cowboys need to keep winning or if Dallas' defense is carrying the Cowboys to success.

Let's look at the Cowboys defense.

Micah Parsons' seven sacks are tied for second-most in the NFL this season. The Cowboys rank second in scoring defense, allowing opponents 14.9 points per game. Cornerback Trevon Diggs got his third interception of the season in the team's Week 7 win over the Lions. That's the big D energy every squad wishes they had.

The Bears are coming into this matchup riding a Monday-night high. They are 4-2 straight up (SU) and against the spread (ATS) against the Cowboys since 2010. And despite a 3-4 overall record this year, Chicago's 181 rushing yards per game lead the league.

As we noted, strange things happened in the league last week. That being said, expect America's Team to roll.

Prediction:
Cowboys by 8 to 10 points

While Kyler Murray was busy cursing out his coach on the sidelines, Kirk Cousins was quietly carrying the Vikings to a 5-1 record.

I like Minnesota to keep rolling this week over Arizona.

One of our NFL Sunday Challenge Week 4 million dollar winners told us that she thought wide receiver Justin Jefferson would do well. We echo that sentiment. Jefferson has racked up more than 100 receiving yards in three-straight games — a career first for the 6-foot-1 wideout.

Here's another trend you might want to consider. The Vikings are 15-6 SU as home favorites since 2019. At FOX Bet, the line currently sits at Vikings -3.5.

We're riding with the favorite in this one and taking Minnesota.

Prediction:
Vikings by 4 to 5 points

If you're reading this, you were probably a part of the 89% of folks who had the Buccaneers beating the Panthers last week. It's okay. We all rode that ship down together.

Panthers-Falcons gives us another chance to get it right when it comes to NFC South matchups. And let's be clear, we're fading the Panthers again.

At FOX Bet, the Panthers are 4.5-point underdogs, but look for the 3-4 Falcons to win by a wider margin. The Falcons have the fourth-best rushing offense in the league and an impressive record against the spread this season. At 6-1 ATS, the loss last week against the Bengals was the only game ATL failed to cover this year.

Carolina has been turmoil central this season with the Matt Rhule firing, quarterback uncertainty and Christian McCaffrey trade. Additionally, the Panthers just don't fare well against the Falcons. Since 2015, they are 4-10 ATS and 4-10 SU against the Dirty Birds.

It's the A with the big win for us.

Prediction:
Falcons by 11 to 13 points

It looks like the Steelers are on track to record one of their worst seasons under Mark Tomlin. At 2-5, that's not an overreaction; it's a harsh reality. If there's any chance that Pittsburgh can salvage its season, righting the ship will have to wait until Week 9.

The 6-0 Eagles will have too much firepower this week.

The Steelers — well, they haven't won in Philadelphia since 1965. How's that for a throwback? Also, the Steelers are 0-4 SU when double-digit dogs under Mike Tomlin.

If you're a Steelers fan, close your eyes. It's gonna get ugly.

If you are an Eagles fan, it's time to consider whether they can run the table this regular season.

Prediction:
Eagles by 8 to 10 points

This is one of our favorite games of the weekend.

Stop us if you've heard this before, but we're 100% all about Jimmy G's feel-good story. Garoppolo getting his team back after getting benched for Trey Lance, getting a new offensive weapon in Christian McCaffrey and having a real shot at getting to another Super Bowl could be the comeback story of the year.

San Francisco has won seven-straight regular season games against Los Angeles, including the matchup earlier this year. New Niner McCaffrey last faced the Rams as a Panther in Week 6. In that game, CMC racked up 158 yards from scrimmage, which included 69 rushing yards and 89 receiving. Another offensive go-to Jimmy G has in his arsenal is George Kittle. The tight end broke out of his receiving slump in Week 7 when he caught his first TD of the season.

The Rams have been a shell of the team they were last year. Matthew Stafford has thrown only six touchdowns in six games, the Rams rank 29th in scoring offense and are 3-3 SU and 2-4 ATS.

Can you say regular season sweep?

The Giants are 6-1, and the post-Russell Wilson Hawks are 4-3. Both these squads have to feel pretty good about what they've accomplished this season. But how have these squads achieved their winning records so far this year?

Well, NY running back Saquon Barkley leads the league with 906 yards from scrimmage, and in Week 7, Bark had 110 rushing yards. We'd be remiss if we didn't mention that QB Daniel Jones was also exceptional carrying the rock last week. He had a career-high 107 rushing yards in NY's 23-17 win over Jacksonville.

The Seahawks run the ball well, too. Their 5.5 yards per rushing attempt is the best in the league. And QB Geno Smith leads the NFL with a 73.5% completion rate. Through seven games, Geno has passed for 11 touchdowns. Russell who?

This one will come down to the wire, but we like Seattle and its 12th man at home.

Prediction:
Seahawks by 1 to 2 points

Now, it's your turn to jump in and win some money!

After you download the app and submit your selections for the upcoming contest, be sure to share your picks with us by tagging @FOXSuper6 and @EricaReneeD and use the #EricaSuper6 hashtag across all social media platforms.