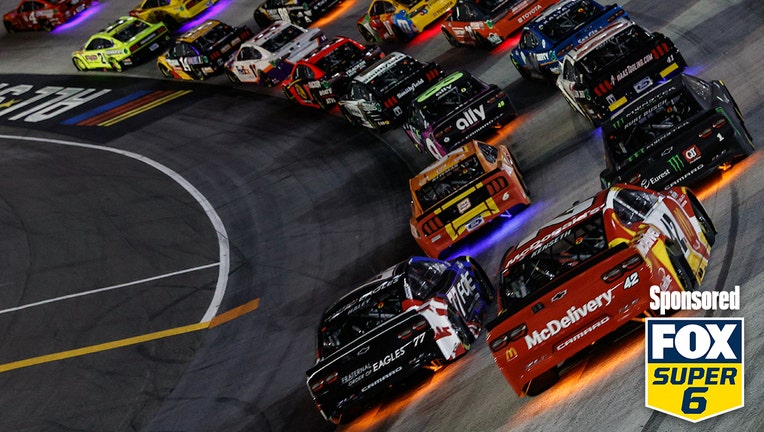 There will be many stars out and shining bright in the Lone Star State this weekend.

The NASCAR Cup Series has its traditional All-Star race on Sunday, a nice change of pace from the usual grind of the point chasing series.

With a different format, a quicker draw and its own brand of drama, it is a race unlike any other on the schedule. And the six rounds of action will be something incredible to watch Sunday night (FS1, 6 p.m. ET).

And this weekend, you can turn that into some serious cash thanks to the FOX Super 6 contest. Just identify the correct answer for all six questions on the FOX Super 6 app and you could win $10,000 of Clint Bowyer's money – absolutely for free. All you have to do is download the FOX Super 6 app, make your picks and wait for the action to begin.

Here are this week’s questions:

Which of these drivers will have the best finishing position at the end of Round 4?

That 15 lap circuit could depend on where the field is set after Round 3. However, Byron could be a really good choice on this one since his car has been really fast for most of the season. So has Hamlin, but the quick jump could work to Byron’s advantage.

How many Chevys will finish in the Top 10 at the end of Round 3?

The different lap segments make the pit crews incredibly important because the tweaking and alterations – as well as spotting trends – that take place between different elements of the race are what will determine who ends up in the Top 10.

Which of these drivers will have the fastest lap by the end of Round 3?

The criteria to get in the race is either you have to have won already this year, been a past Cup Series champion or a past All-Star race champion. Honestly, you can’t go wrong with any of these choices. Bell has been impressive at times this season and maybe the quick 15 lap format allows him to let the car run out.

For the Open Qualifying race, which driver will have the best finish in Round 4?

This is where you are going to have to watch the first race closely before choosing. But in reality, NASCAR fans are extremely smart when it comes to picking and eyeing a winner. Don’t just go against the Fan Vote because "it’s a popularity contest." In fact, the Fan Vote may be the best bet you got.

How many Fords will finish in the Top 10 at the end of Round 4?

As we mentioned with the Chevy’s, this is a pit road-focused event and it’s going to take a lot of work from the guys along the side to get into the top 10 – perhaps more so than the drivers themselves. Ford’s have had great pit crews. This could be a high number.

Which manufacturer will have the most cars in the Top 3 at the end of Round 4?

This is a tough call in an All-Star environment. However, it is important to note that Chevy is the leader in the manufacturer's race and has performed well of late.

For more up-to-date news on all things NASCAR, click here to register for alerts on the FOX Sports app!

Play Clint Bowyer's NASCAR FOX Super 6 contest for free, and you could win $10,000! Just download the FOX Super 6 app and make your picks now for your chance to win!