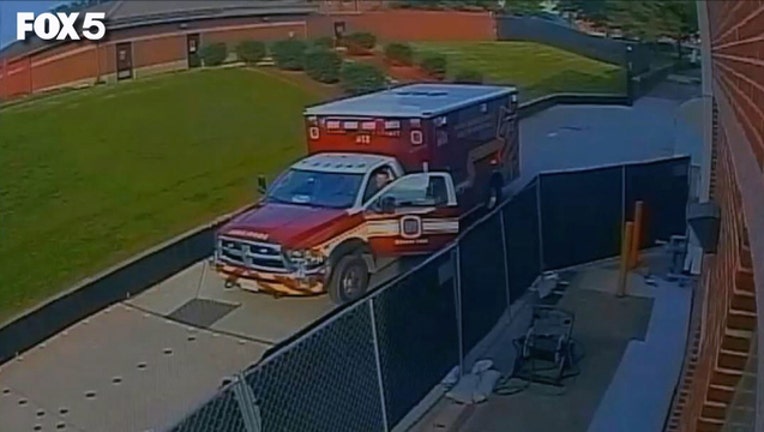 COLLEGE PARK, Md. (FOX 5 DC) - New video obtained by FOX 5 is helping to paint a better picture of the events that took place at the University of Maryland on the day football player Jordan McNair suffered from heat stroke, ultimately leading to his death.

The video, obtained first by FOX 5 through a Maryland Public Information Act request, is hours long and captures the scene around the football team’s practice facility on May 29.

The portions of the video that can be seen show the football team running drills around the same time McNair was reportedly described as "gassed." The videos also show the practice ending and players, coaches and staff leaving the field. Staff members are seen running back and forth as they move equipment from outside to inside the facility.

In a series of videos, which are captured on body cameras from two responding police officers, one of the officers appears to express her frustrations at the speed in which EMTs were responding to the scene.

The body camera video also captures EMTs going into the training facility and officers directing grounds crew members to clear a path for an ambulance.

An ambulance is captured on the surveillance video responding and leaving the scene with its emergency lights on.

The University of Maryland released the following statement to FOX 5 about the release of the videos:

McNair was taken to the hospital and he later died on June 13.

The university ultimately admitted that its staff improperly diagnosed and treated McNair. Some medical experts, such as Dr. Douglas Casa, the chief executive officer of the University of Connecticut's Korey Stringer Institute, say McNair likely would have survived if treated correctly.

Following McNair’s death, an ESPN report claimed there was a “toxic” culture in the university’s football program. Then-head coach DJ Durkin and multiple staff members, including strength and conditioning coach Rick Court, were put on administrative leave in August following the release of the report.

Court resigned from the university with a buyout in August.

The university launched an investigation into McNair’s death, and the claims about the toxic culture and the 200-page report detailed several incidents of abuse by coaching staff, including Court, based on feedback from a Sept. 9 survey of 94 current football players.

While the report did not go as far as to call the university's athletics culture "toxic" as reported by ESPN, the survey received accounts of players being forced to eat in excess and being physically attacked and humiliated by coaching staff. Accounts say Court threw weights in anger and reportedly forced an overweight player to eat candy while other players were working out.

The Board of Regents chairman James T. Brady resigned after the controversial recommendation to keep Durkin on as the head coach. Brady had stated at a press conference that Durkin had been unfairly blamed for the dysfunction in the athletic department. He called McNair's death tragic and heartbreaking but said there was not a toxic culture within the football program as some have alleged.